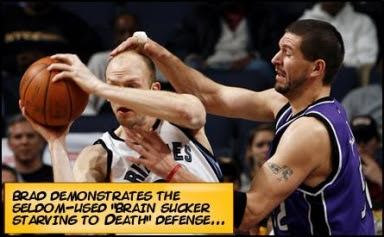 Brian Scalabrine: I understand that Brian's talents are somewhat, you know, limited, but a line of 3 points (1-for-3) and 2 rebounds from your starting power forward is a little disappointing. However...[looks down the Boston bench]...I guess he's the best option they have right now. I really shouldn't rag on Veal too much. He works hard and hustles his ass off for each and every one of the five minutes he plays. And the Celtics are 6-2 since he replaced Kevin Garnett in the starting lineup, so I guess he must be doing something right.

Travis Diener: Ideally, a starting point guard should be able to shoot efficiently and run an offense. Last night, Travis didn't (2-for-8) and couldn't (1 assist, 2 turnovers). Then he injured his ankle by -- get this -- stepping on referee Bennet Salvatore's foot. Said Diener: "I don't know why he was so close to me." Good question, Travis. But I have a better one for you: Who gets injured in a minor collision with an aging, white-haired referee? And, of course, the answer is you.

Fun fact: According to Wikipedia, Travis' high school basketball coach was his uncle Dick Diener. Hold on, I want to type that out again. Dick Diener.

Jamaal Tinsley: The four or five people who bother to analyze the Pacers seem to think that Jermaine O'Neal's absence is the reason for the team's woes (eight losses in their last 10 games). But I'm here to tell you that's not the case. The driving force behind Indiana's surprising early season success was the play of Tinsley. When he was healthy and playing well, the Pacers were winning with our without O'Neal. But the raps against Tinsley -- namely that he can't stay healthy and doesn't understand the importance of shot selection -- have once again proven to be true and true. His recent appearances have been spotty, and now he's out until sometime after the All-Star Game with inflammation in his right knee. The fact is, the Pacers are only going to go as far as Tinsley can take them, and that appears to be the trainer's table.

Tayshaun Prince: Remember when Tayshaun was dubbed The Next Scottie Pippen? Turns out that was absolutely true, assuming people meant the early 2000s version of Pippen. His offensive game has fallen off (13.3 PPG on 43 percent shooting), and his specialty -- defense -- hasn't been so hot lately either. Last night, Prince scored 6 points (2-for-10) and got handiwiped by Josh Smith (30 points, 12-for-21). Maybe it's just me, but it sure feels like the improved play of the Pistons bench has served as a cloaking device for Prince's disappointing season.

Fun fact: According to his official Web site, Tayshaun's hobbies include reading and going to plays.

Joe Johnson: The Hawks' All-Star representative shot 3-for-13 against the Pistons. You know, in most cases, averaging 20 PPG on 40 percent shooting for a bad team doesn't win you a spot on the All-Star team (just ask Gerald Wallace). I'm sorry, but Joe's spot should have gone to Jose Calderon.

Mario West: He played 17 seconds last night. I know I've asked this before, but why even bother to play somebody 17 seconds? Couldn't he accomplish more by handing out towels on the bench, or ordering pizza for after the game?

Fun fact: Mario has appeared in 38 games this season. He has played 35 seconds or less in 13 of those games, including games of one second, two seconds, and three seconds.

Minnesota Timberwolves: I know they're one of the worst teams in the league, but they got beaten last night by Bostjan Nachbar. And if you're wondering whether a monkey got hold of my keyboard and mashed that sentence out by mistake, let me just say ooh OOH aah AAH!!

Fun fact: If you ever need to scream it in excitement, Bostjan's name is pronounced BOSHT-yahn NAHK-bahr. You know, in case you're a Nets fan (unlikely), an NBA groupie (slightly more likely), or a cheap prostitute (call me).

Miami Heat: Well, they're scoring more points and losing close games now. I guess that's a step up. They're 1-22 in their last 23 games.

Fun fact: There is nothing "fun" about the Heat right now. Not even making fun of them.

Allen Iverson: A 5-for-20 shooting night will always win you a place in the Worst of the Night. Especially since I just kind of assume an All-Star could score at least one point per shot.

Fun fact: In an interview about his tattoos, The Answer said, "I put shit on my body that means something to me." He puts...shit on his body?

Sacramento Kings: Playoffs? Don't talk to be about the Kings making the playoffs. Are you kidding me? Playoffs?! Not when you lose to a D-League level Grizzlies team.

Chicago Bulls: I'm sick of the excuses. I'm sick of John Paxson making bad moves and not going all-out to make a season-saving trade. I'm tired of Ben Wallace, his contract, and his distractions. And mostly, I'm tired of watching the team fall on its face at home, which happened (again) last night against the Hornets. You might think that a 14-point loss to a really good team isn't anything to be that upset about. And maybe you're right. But if you watched the game, you know that the Bulls just fell apart in the second half due to clunky, misdirected shooting and careless, sloppy passing. Losing is one thing. Losing the way they're losing -- and without any hope for the future -- is another thing. And that thing is depressing.

Anonymous said...
Want to share this vid of Dwight Howard practing for the Dunk Contest...Enjoy

Anonymous said...
I guess you meant "The Kings forward did his best Mario West impression".

BTW, I don't get how I can't make an NBA team for the minimum just to do the same things Mario West does... which is nothing. And don't you like the thought of a jersey with "Farfa" on the back?

Sullivan said...
Scalabrine. Now there is a ballplayer. He is such a strange case because every member of the Celtics/Nets coaching staff and front office insist that he somehow invisibly benefits teams, but everybody else laughs at the red headed fatty who has no apparent basketball skill.

The fact that he is starting right now is still a bit rediculous even considering the Celtics shortened bench with Garnett and Perk out though. Starting Baby and Powe as the front line would be much more intimidating, offensively and defensively. Even though they are both young and magnetic to fouls, they have both elevated their games big time with the starting big guys out. Scal on the other hand, has not.

B-Will said...
You missed an bawful stat from yesterday. Shawn Marion now has the most rebounds for the year for the heat as a player, and as an opponent.

Anonymous said...
apparently on your one second link for mario west they put it as Coach-DNP LOL guess it was too humiliating to put one second on for him on their scoreboard
2/13/2008 2:32 PM

Anonymous said...
If this trade goes through the Mavs deserve the #1 spot on the powerless rankings. The only possible good thing I could see coming out of this is if Kidd retires when LeBron's contract is up, and they sign him with all the extra cap space. But that will never happen. It's almost enough to make me jump ship for San Antonio, but that one has a few holes in the bottom of it too.
2/13/2008 3:17 PM

sullivan - Brian is one of those hard work/chemistry guys. Coaches and teammates love him. And hey, if he can give other guys 10, 15 minutes of rest, he's doing them a favor.

flohtingpoint - Wow. I didn't think it was going to happen.

chris - I'm not ready to condemn the trade just yet. After all, the Mavs biggest problem seems to be running an offense that doesn't rely on isolations and drives to the hoop. Jason can give that to them. I've talked about how they're one of the worst teams in the league in terms of APG. I think this definitely helps Dallas...in the short run. But it's hard to tell how much Kidd has left in the tank.

I will tell you this, though. I love how the Western Conference teams are trying to one-up each other. AND...remember how last season nobody was willing to make a move? Man, Danny Ainge and Kevin McHale changed all that, huh? Now we're seeing bold moves. Maybe a little bit of panic, too.
2/13/2008 3:32 PM

Anonymous said...
you should quit your clark kent job and devote yourself for this blog, because money cannot buy you fans.

when quitting, say you're doing this for the pacers and shaq's integration into Suns' offence.

Anonymous said...
speaking of john paxson, i can't believe there still are people who support him. the guy does nothing but sit on his ass and collect a paycheck. he's the GM equivalent of shaq.

Anonymous said...
"I put shit on my body that means something to me."

Word of the Day
Previous Posts
T-Mac's Guide to All-Star Game Hooky
Powerless Rankings: Eastern Conference
Defensive stancing with Michael Jordan
If a trade is demanded in New Jersey, does it make...
The Phone Call (and Worst of the Night)
Worst of the Night, and more thoughts on Shaq to P...
Mark my words: Shaq will be the right move
Worst of the Ni...Shaq to Phoenix?!
While you were busy dreading a Lakers 39-game win ...
Powerless rankings: Western Conference