Thursday, February 07, 2008
Worst of the Night, and more thoughts on Shaq to Phoenix
By Basketbawful at 10:41 AM
16 comments 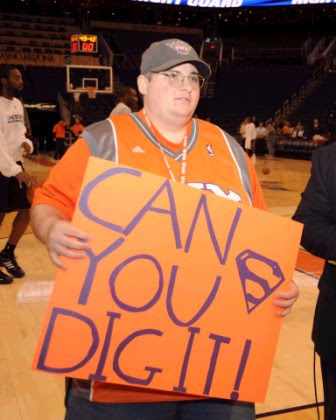 Okay. I have to admit, when I read that Shaq called Steve Nash on the phone and said, "I will not let you down," it gave me chills. Now that I've had a day to calm down, my glass is half full of Shaq. I still don't think it was the best move Steve Kerr could have made this season -- why didn't he go after KG last summer?! -- but Shaq, old and lame though he may seem, still brings a few things to the table. Hey, the Lakers won two championships in Kareem Abdul-Jabbar's final three seasons, and they might have gone for three in a row if Magic Johnson and Byron Scott hadn't gotten injured during the 1989 NBA Finals. And most of the criticisms aimed at Shaq -- namely that he can't keep up with the Suns' fast break, that he's lost his explodability around the basket, and that he's a slow-footed, ham-handed liability on defense -- were all levied against Kareem 20 years ago.

I'm not saying it's going to work, only that, under the right set of now-or-never circumstances, it can work. And whether you want the Suns to succeed or fail, the trade sure makes them a hell of a lot more interesting to watch...which is really saying something considering that they were already the most exciting offensive team in the league.

I do have one little mea culpa from yesterday's post. I referred to Shaq as "fat" not once, but twice. Upon further review of his most recent pictures, I came to the following realization: Shaq isn't fat. In fact, he's probably as svelte as he's been since his early days with the Lakers. So why did I bust on The Big Daddy's not-so-big-anymore waisteline? Well, first and foremost, it's an easy joke. It's like putting a midget or a monkey in a comedy movie; you know, something that's used for a quick, cheap laugh. But there's more to it than that. Like many sports fans, I sometimes struggle with the concept of a player's athletic mortality. When Michael Jordan unretired (again) to play for the Wizards, there were people -- though they were few -- who believed, or perhaps wanted to believe, that Mike could still throw one down from the freethrow line if he really wanted to. It's that same type of person that, even if they won't admit it out loud, still kind of believes that, at any time, Shaq might burst out of his shell and drop one of those signature 35-point, 20-rebound games on some hapless opponent (probably Erick Dampier).

But the reality is, barring an exposure to Cosmic Rays or an injection of Captain America's Super Soldier Serum, Shaq won't ever have another 30/20 game. As a fan, it's hard to let go of that memory of greatness. So, you know, we make excuses. Shaq is fat. He's not in shape. He's faking an injury. He's not motivated. We want to believe that it is these self-imposed obstacles, and not the ravages of time, that have robbed us of the Mighty Shaq of old.

But it's not. We all decline with age. But that doesn't mean we become useless. Just ask Kareem. And the Suns proved last night against the Hornets that, even without Marion, they can score with anybody. And if Shaq can stay healthy and add the one or two things the Suns need...anything can happen.

Now, on to the Worst of the Night.

Kobe Bryant: The Black Mamba shot 4-for-16 and committed a critical turnover with 8 seconds left that helped secure the Lakers' 98-95 defeat by the Hawks.

Mario West: The good news: He actually got a full minute of playing time! The bad news: He scored a one trillion. Wah-waaaaaaah.

Carlos Arroyo: Uh, is he injured or something? Did he bang Stan Van Gundy's daughter? Because the Magic's starting point guard played only 5 minutes against the Nets, scoring zero points (0-for-2) and committing a turnover.

Washington Wizards: There's no shame in losing to the defending champs, but it was Washington's fifth loss in as many games. The Wiz dropped to .500 (24-24) and their offense is calcifying (35 percent shooting last night). They need Caron Butler, and they really need Gilbert Arenas.

Isiah Thomas: His Knicks are 14-35 -- the fourth-worst record in the league -- and they've lost seven games in a row. But according to the Baby-faced Assassin, the Knicks are improving. "You can say we're not getting better because we haven't won games, but I think over the last couple of weeks we have gotten better as a basketball team." And that, my friends, is what we like to call denial.

Travis Diener: The Pacers' starting point guard scored 2 points on 1-for-7 shooting. Plus -- and I know this shows a shocking lack of maturity on my part -- his last name always makes me think "Wiener."

Jason Williams: I guess it just wasn't a good night for starting point guards. Williams scored zero points (0-for-4) and had only 2 assists in 27 minutes. On the up side, he had more blocked shots (1) than both Eddy Curry and Zach Randolph.

Sam Cassell: Memo to Sam-I-Am: If you want to be a Celtic, beating up their starting point guard is not the way to go about it. Rajon Rondo (24 points, 10-for-13 shooting) was embarrassing his counterpart so badly that Cassell bloodied his nose and fouled him flagrantly enough to get tossed out of the game.

DeSegana Diop: He had zero points and 1 rebound in 5 minutes, which is the exact same output Juwan Howard had in only 3 minutes. Mr. Intangible has become Mr. Invisible.

Jarron Collins: Zero-for-everything in exactly 16 seconds of playing time. The Collins family must be so proud.

J.R. Smith: The game of one-upsmanship between Jerry Sloan and George Karl continues. After watching Sloan embarrass his player with 16 seconds of PT, Karl yanked Smith after only 3 seconds. Top that, Jerry!

Steve Nash: The Nashty One showed off his point guardy brilliance with 32 points and 12 assists. You know there's a "but" coming, right? Well, his spotty-at-best defense uncorked Chris Paul (42 points, 9 assists, 8 steals) and his 10 turnovers gave him his second career triple bumble.

Brian Skinner: I've been campaigning so hard for Mike D'Antoni to give this guy more minutes that a couple people have emailed me asking if I'm his agent. Well, I'm not. And after Skinner's zero-point (0-for-2), 1-rebound performance (in 14 minutes) against the Hornets, I'm done questioning D'Antoni's rotation. (For now.)

Aaron Gray: After the Bulls big man scored 14 points in 18 minutes against the Sonics, all the local papers annointed him "The Answer" for Chicago's low-post scoring woes. One Chicago sports writer who shall remain nameless even went so far to predict that Gray would eat Joel Przybilla alive when the Bulls faced the Blazers. Well, Gray's zero points and zero rebounds in 3 minutes of action only answer the question "Who was the Bulls' worst player last night?"

Sacramento Kings: Ever since their top three players returned from injury, the Kings have gotten a lot of buzz as a potential first round playoff darkhorse. Me? I don't see it. And after they got hammered by 13 at home to the league's third-worst team, you shouldn't see it either.

Calling all geeks: The Pricess Bride Edition of the NBA Closer is up at Deadspin.

Staff Writer said...
He is 35. Your glass should ALWAYS BE FULLY EMPTY, not half full.

Unknown said...
*phone rings at the Nash residence, as Steve leans back and answers it*

Shaq: Hi Steve, this is The Big Aristotle.

Nash: Wilt's dead, is this a prank call? *In the background you can hear Steve's wife yelling at him to hang up the damn phone.*

Shaq: Nothing... Just calling to let you know your MVP is still tainted you dumb mothafu- *click*

Mark Stein (who was sitting across the table from Steve the whole time): What did Shaq want?

Anonymous said...
Look. Flohtingpoint (what is the derivation of that name btw), you make good comments on this blog and all. But if you keep making posts like that, I'm going to need surgery for a busted nut. It's so believable I can't stop laughing.

Anonymous said...
This was a very good comment over the Shaq-Trade. Who would have thought that you can be so damn serious about things like the burden of age.
2/07/2008 2:29 PM

"flohtingPoint" was conceived while I was working as a web programmer for the United States Air Force. My previous handle, "Edible Fetus" was denied at QuakeCon and there was already a "floatingpoint" so I just swapped the a for an "h", so it sounds the same if you pronounce it.
2/07/2008 2:52 PM

Anonymous said...
It's funny how the entire blogosphe/ Internets /universe kind of followed the same pattern.

2- Well, Shaq's not THAT bad. And Marion was chemistry poison.

3 - Maybe Kerr was onto something after all.

(We haven't gotten quite to 4, but a couple of wins with Shaq getting double figures should lead us to...)

4- Hot diggety damn! I always said this was a genius move! Suns for world champions!

Evil Ted said...
Isn't it cute how the Suns fan in the picture doesn't realize that "Can you dig it" is a question.

starang said...
I was at the game last night. Shaq was introduced, spotlights on the Skybox. He stood for a standing O. Sat down. Stood again cause we kept cheering. Pointed at his ring finger, and the crowd went CRAZY. I love it.
2/07/2008 5:28 PM

Jeffrey Hardy Quah said...
Didn't the Suns nearly trade Marion for Garnett, but the Celtics bowed out because Marion threatened to exercise his opt-out?
2/07/2008 6:22 PM

Anonymous said...
What gets me is this: the Suns were probably one always-makes-the-right-play Robert Horry foul from a trip to the Finals and a likely championship. Granted, you need somebody to replace Kurt Thomas, but do you dump Marion? Really?

Mind you, I'm not a believer that Marion is all that great without Nash feeding him. Just watch what happens in Miami. But the Suns were definitely an elite team.

Unknown said...
@wormboy
Mind you, I'm not a believer that Marion is all that great without Nash feeding him.

john marzan said...
shaq and kareem are different players. people bring up kareem's name only to show that you don't need speed at every position, you don't need a five-man fastbreak to win the title.

the problem with kareem during his later years wasn't his offense, but his defense and toughness. rambis, lucas, and green had better rebounding numbers than him. riley's famous "no rebounds, no rings" was directed primarily at jabbar.

kareem had a tough time against olajuwon in 86 because they were quicker and stronger. that's why they had to get thompson for another big body (mychal's not exactly a speedster himself.)

shaq, unlike kareem, won't play wimpy. he's bigger and stronger, and is very quick for a man of his size. the only question remaning is whether will be healthy for the playoffs. if he's still as good as last season (meaning we're getting 75% of shaq during his peak years), then it is not unreasonable to think that we can beat the spurs and win the championship this year.
2/12/2008 6:24 AM
Post a Comment
<< Home
Subscribe
RSS Feed
Mailing List