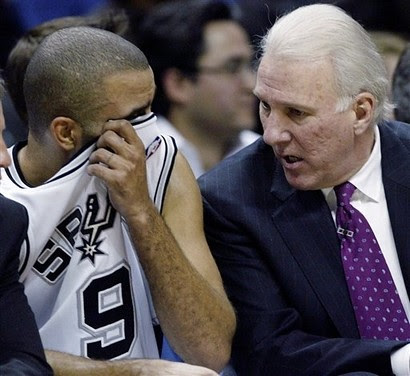 JamesOn Curry: The Bulls rookie, best known for a gratuitous capital O in his first name, added a big P to his arsenal of extraneous letters last night. Curry, who's currently serving a stint with the Iowa Energy of the NBA Developmental League, was urinating in an alley near the Hampton Inn in Boise, Iowa, when he was spotted by a police officer. As the officer approached in his patrol car, Curry saw him and started to walk away (only after holstering his boomstick, one hopes). The officer turned his emergency lights on and Curry bolted. He went into the Hampton Inn and was stopped by a locked door (d'oh!). Curry was then taken into custody and charged with misdemeanor counts of urinating in public, resisting arrest, and being a damned fool. The biggest tragedy to come out of this is that Curry will most likely miss the Zooperstars performance during halftime of the Energy's game against the Austin Toros on Sunday.

Bruce Bowen: He scored 2 points on 1-for-4 shooting last night. That makes Bowen 5-for-31 (16 percent) over his last six games. His best performance during that stretch was a 6-point, 2-for-8 performance against the Warriors. As I've said before, I know the Spurs don't keep him around for his offense or his good looks, but the dude's shooting the ball like somebody replaced his hands with oozing squid tentacles.

Francisco Elson: He was only 0-for-2 in limited action, which doesn't sound that bad, but trust me, it was. First of all, Elson's two shots were a 15-footer from the left wing and a 17-footer from the right wing. According to most NBA scouts, those shots were about 14 and 16 feet outside his range, repectively. Second, I have rarely seen a jumpshot so awkward and ugly. It would make a blind goat weep. I swear, the way his limbs splay out and freeze during his jumper, it's like he's getting electrocuted mid-shot. Francisco, if you're wondering why Gregg Popovich yanked you after only three minutes, go back and watch film of those shots.

Damon Jones: How about Damon's new hairstyle? The sides are mostly shaved but he still has the hair on top. What do you call that, exactly? A fohawk? Whatever it is, it looks ridiculous. Not as ridiculous as Brad Miller's cornrows or Scot Pollards, well, anything. But still.

Zydrunas Ilgauskas: Speaking of hair, Ilgauskas was sporting the freshly-shaved head look last night. You know, minus the somewhat manly noggin-stubble, the Z-Man's shorn scalp makes him look kind of like the Metaluna mutant, or maybe Sloth from The Goonies.

Tony Parker: TP missed two ginormous freethrows with 29.4 seconds to play...freethrows that would have tied the game at 90. Instead of tying it up, the Spurs lost 90-88. At home. Said Parker: "They both felt good. They just didn't go in," Parker said. "I shoot 200 free throws every day. It was a good chance to show my improvement. They just didn't go in." Actually, Parker is shooting only 73 percent from the line this season after hitting a career-high 78 percent last year. You know, just FYI.

Utah Jazz: Hmm. Do you think defense is a problem for the Jazz? They gave up 120 points, 16 offensive rebounds, and a career-high 41 points to...Linas Kleiza?! How has Jerry Sloan not gone freako apeshit yet? I'm telling you, if he doesn't get berzerky soon, somebody needs to check his basement for body snatcher pods.

Paul Millsap: For the most part, I'd say Millsap has exceeded expectations for a guy who was picked 17th in the second round of the NBA draft. But 1-for-8 shooting wouldn't exceed anybody's expectations, unless maybe Millsap was actually a labradoodle.


[Update] Marcus Camby's shooting: The people -- or at least a reader named Five Pound Bag -- have spoken: "You could have added 'Marcus Camby's shooting,' as he missed on the rare dirty triple by two points on account of going 4-13 from the floor. His 11 (!) blocks and 24 (!!) boards will just have to be a dirty double." Five Pound Bag, you are absolutely right. Thank you for correcting my shortsightedness.

Brian Skinner: I don't know what to make of Skinner's performance last night. On the one hand, he grabbed 9 rebounds and blocked 4 shots. On ther other, he was the only Suns player to go scoreless (0-for-3) and he committed 4 turnovers. I mean, how do you play 22 minutes in the Phoenix run-and-gun offense and not score a point? That said, I really, really hope that coach D'Antoni keeps playing this guy. Phoenix desperately needs gritty roleplayers who are willing to sacrifice their own offense, bang people around, and get their hands dirty. And Skinner's the only guy on their 12-man roster who fits that bill. But my guess is that once Grant Hill gets back, Skinner's going back into cold storage.

Derek Fisher: I cannot stress enough how important Derek Fisher has been in the Lakers' resurgence this season. Not only is he providing heaping helpings of much-needed veteran leadership, he's also scoring 12 PPG on a career-high 47 percent shooting. And he was huge in the L.A.'s previous two wins over the Suns (14 and 19 points, respectively). But last night he was very, very small: 3 points (1-for-6), 1 assist, 3 turnovers.

Kwame Brown: Yup, I still think this guy is the worst first overall draft pick of all time, worse even than The Kandi Man. He shot 3-for-8, missed two layups and a dunk (sounds like a job for the Mikan Drill), committed 5 fouls, and had more turnovers (7) than rebounds (6). And the Staples Center crowd was booing him. Most of the time, I'm not sure the Staples Center crowd is even awake. But they were awake last night, and acutely aware of how sucktastic Brown can be. Still, the booing was pretty harsh. When even I feel sorry for a Laker, you know something is horribly wrong.

Luke Walton: He had a career season last year, signed a nice new contract with the Lakers over the summer, and now his numbers have dropped in pretty much every category. Man, I haven't heart that story before. (Another textbook case of the Contract Year Phenomenon.) Walton's downward spiral continued last night, as he scored zero points on 0-for-4 shooting.

Leandro Barbosa: He shot (8-for-12) and scored (team-high 22 points) well, but his floor game was lacking. The Suns offense dries up when he's playing the point. He dribbles too much, forces up tougher-than-necessary shots, and throws the ball away (4 turnovers). D'Antoni should use him exclusively as a shooting guard. Of course, that would be easier if the Suns actually had a backup point guard...

Dave Fromm said...
I'm beginning to feel for Kwame. That was a tough stretch in the third quarter, beginning with the missed dunk. He just has no post game, like a Charles Oakley without the attitude or the court sense.
1/18/2008 11:45 AM

Anonymous said...
You might as well have called this "Worst of the Night: Spurs Edition", you bastard.

Basketbawful said...
dave -- I know hating the Lakers is sort of my "thing" and all, but yeah, I felt bad for Brown too. It's not like he wasn't trying out there. It's just that he's not that talented, he hasn't played many minutes lately, and the Suns were really after him defensively. Look, I've rooted for the Pacers long enough to understand that sometimes your team isn't winning no matter what you do. This whole "booing Player X on your team" phenomenon has gotten out of hand. If he had been loafing or not trying, sure, boo the hell out of him. But it's really not his fault that he's so bad.

Tonewise said...
Is Vince Carter really going to be at the all star game this year?

If that happens can u add a worst of the night stat line to your post the following day citing NBA fans for giving him a hall pass to this event(popularity contest).

Yes I know this is way out of context, I was just going to place a vote for my boys Bosh and Calderon when I noticed VC seems to be getting a fair share of votes... again...
http://www.youtube.com/watch?v=Hv7IZP7u9FE

Jey said...
I've been partial to calling Kwame "Teflon Hands" since last season. As a Suns fan and eternal Laker-hater, I just can't find it in me to feel sorry for the guy. Sure, it's not his fault that Michael Jordan saw the second coming of Bill Russell in Kar 54. But if the dude hasn't learned how to hold onto a sweaty leather ball by now, then maybe it's time he look into a career of flipping crepes.

Anonymous said...
wouldn't it be funny if jamesOn was staying at the hampton inn? if so how lazy (read: stupid) can you be? btw which is your favorite zooperstar? they're all funny but the best resemblance is dick flytale. it looks just like him, a blabbermouth with big teeth and big beady eyes and penis-shaped.
1/18/2008 10:23 PM