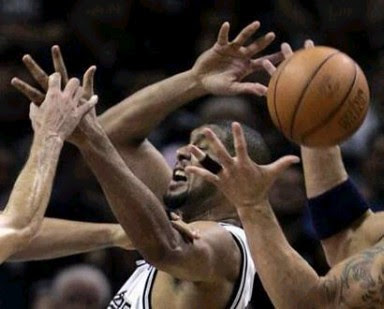 Charlotte Bobcats: The Bobcats had to feel pretty good about their chances last night, considering the fact that Chris Bosh (strained groin), Andrea Bargnani (hyper-extended left knee) and T.J. Ford (left thumb) were all out with injuries. But instead of capitalizing, the Bobcats lost by 19, mostly because they shot the ball like it was a ticking time bomb and their hands were wrapped in duct tape and barbed wire: They missed nine of their first 11 shots, shot 28 percent (12-43) in the first half, and hit only 33 percent (27-81) for the game. Their "best" players were 7-for-38: Raymond Felton (0-for-8), Jason Richardson (3-for-17) and Gerald Wallace (4-for-13). Where's Adam Morrison when you need him? The Bobcats have now lost six games in a row, and they face Cleveland, Detroit, and Orlando in the next two weeks. Said Gerald Wallace: "We're digging ourselves into the Grand Canyon right now and it's too much to come back." I'm not sure how one digs oneself into the Grand Canyon, but if he meant "We suck," he's right on the money.

Mike Woodson: The Hawks actually won on the road last night, improving their road record to 3-5. And their coach is flipping out about it. Said Woodson: "When you're talking about making the playoffs, it's very important to win on the road." While I can't argue with his logic, I feel it's my duty to remind him that the Hawks are 7-9, and that this big road win was against the Philadelphia 76ers (5-12), and that their two other road wins came against the Miami Heat (4-13) and Minnesota Timberwolves (2-13). Beat a .500 team on the road and then we'll talk about the playoffs.

The 76ers three-point shooting: Philadelphia hit only two of their 11 three-point shot attempts last night. Over the last three games, they're a dismal 5-37 from three-point range, including an 0-14 in a game against the Wizards. Kyle Korver, who's hitting 29 percent (19-64) of his three-point shots on the season, said: "We've got to find a way to put the ball in the hoop." In related news, Korver is expected to issue a press release today stating that the Sixers also need to outscore their opponents if they want to win.

Chicago Bulls: Once again, the Bulls came out flat, got down by double digits, and came up just short after a furious fourth-quarter rally. Ben Gordon and Luol Deng, who both looked so good in Saturday's win over the Charlotte Bobcats, once again played like crap: Gordon scored 10 points (4-16), and Deng added 9 (3-13). Said Deng: "It's not like I was missing jump shots. I was missing shots close to the basket." Uh, somebody should point out to him that that's actually worse than missing jumpers.

Trenton Hassell: He played exactly 10 seconds last night, contributing no meaningful statistic, or anything else meaningful for that matter. He didn't even put in enough time to earn a one trillion. That's kind of sad.

Shaq's defense: Mehmet Okur scored 25 points (10-14) and hit four out of five three-pointers, thanks mostly Shaq's absolute refusal to shamble out and guard him on the perimeter. It's not all Shaq's fault, of course. The Big Creaky currently has the foot speed and lateral mobility of a slow-growing moss...so Pat Riley probably should have switched up the defensive assignments. Amazingly, Shaq still managed to pick up 5 fouls (and therefore played only 22 minutes) despite rarely coming anywhere within 10 feet of his man.

Jason William's floor game: The Heat's starting point guard dished only 4 assists, committed five turnovers, and had a +/- score of -14. Williams also got a lesson in point guard-ery from both Deron Williams (15 assists, 2 turnovers, +18) and Andre Kirilenko (9 assists, 3 turnovers, +16).

Magic / Warriors: Holy crap! This was an early-season nominee for game of the year! That said, you can find plenty of awful if you read between the lines. Like Dwight Howard's 9 turnovers (compared to 3 assists). And Stephen Jackson missing his first seven shots. And Baron Davis' 6-23 shooting performance (including 1-8 from three-point range) along with Al Harrington's 4-17 (and 2-9 from three). And, of course, the fact that Austin Croshere played at all (6 minutes, 1-4 shooting). But the final 20 seconds were the wildest of all. Dwight Howard got fouled by Baron Davis on a dunk attempt. Davis fouled out; Howard missed the dunk and then slapped the padding on the basket standard out of frustration, which earned him an automatic technical (Jackson hit the freethrow). Then Monta Ellis missed the first of two freethrows, which allowed the Magic to tie the game a few seconds later when Rashard Lewis hit both of his foul shots. Orlando then established their dominance in overtime. One final note: This was another one of those "live by the three, die by the three" games for the Warriors, as they hit only nine of their 40 (!!) attempts.

Anonymous said...
It seems to me pretty normal to have end of bench guys coming in and contribute nothing statistically for 60 seconds.

Anonymous said...
Charlotte got crushed by the Raptors because they were all hungover.