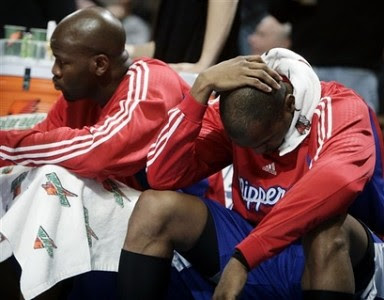 Cleveland Cavaliers: Perhaps distracted by the fact that Anderson Varejao had signed a three-year, $17 million offer sheet with the Charlotte Bobcats, the Cavs basically rolled over and died in the face of the Net's furious onslaught. How bad was it? Well, it's never good when a team scores only 79 points on 34 percent shooting and loses by 21 at home. But in addition to that, Eric Snow played 24 minutes and outrebounded Drew Gooden (who played 38 minutes) 6 to 5. Sasha Pavlovic scored 2 points on 1-9 shooting. Their leading scorer was second-year guard Shannon Brown (20 points, 8-16), and if you didn't know he even played for the Cavs, there's a good reason for that: He's only played in five games this season (and only 23 last season). Oh, and Demetris Nichols was last night's one trillion award winner (Update: Nichols just got waived). On the bright side, for the Cav's anyway, it looks like Danny Ferry is going to match Varejao's offer sheet.

Fun fact: Larry Hughes, who couldn't stay healthy if all his human parts were replaced with bionic implants, is out for the next four weeks with a bruised leg. Do you think that Willis Reed ever reads about all these players missing time with bruises and sprained fingers and throws up in his mouth a little? I know I do.

Dan Fegan: Varejao's stubborn (and foolishgly greedy) agent went toe-to-toe with Danny Ferry. And lost. One rival agent -- once he'd finished erupting in a pitiless "Muwahahahahahaha!!" -- said that "Danny Ferry cleaned (Fegan's) clock." The Cavaliers plan to match the Bobcat's offer sheet, which will allow them to retain Varejao's services at a price that's well below market value (not to mention the $10 million per year Fegan was asking for). This is what Fegan gets for trying to get Greg Ostertag money, because let's face it: Varejao is no Ostertag.

Suns versus Pacers: If you peruse the box score for this game, you'll see a smattering of blocks and steals. But let me assure you: Those numbers are misleading, and any defense that was played happened purely by accident. You can see tougher defense played in layup drills. Amare Stoudemire had season highs in points (42), shot attempts (24), rebounds (13), and assists (4). Steve Nash had a season-high 17 assists. Jermaine O'Neal had season highs in points (30), shot attempts (20), and shooting percentage (70 percent). The teams combined to score 238 points on nearly 200 shot attempts. This was also a trademark Pacers game in that they overcame a 15-point deficit to lead by four points with just over a minute to go, and then they didn't score again. The Pacers have been -- and I mean historically, not just this season -- one of the NBA's best teams at stealing defeat from the jaws of victory. During the post-game press conference, one reporter suggested to Pacers' coach Jim O'Brien that the loss was kind of a moral victory, since his squad had almost taken down one of the league's elite teams. Said O'Brien: "Please, don't even go there if you don't mind." Then he stood up and walked out of the interview room.

Fun fact: What happened to Boris Diaw? Last night's game was a scorefest, but he only managed 2 points on 1-3 shooting. This was after going scoreless (and 0-1) in 15 minutes against the lowly Knicks. He's currently shooting 44 percent, and he's only reached double figures in scoring three times this season, which seems crazy when you consider the fact that he's playing almost 30 minutes a game for one of the league's highest scoring teams. Is he hurt? Did his dog die? I mean, there has to be a reason for this, right?

Atlanta Hawks: Fresh off their biggest win of the season -- a rare road win against a sub-.500 team -- the Hawks laid a big, stinky homecourt egg against the Pistons. Down by 26 after a 13-point third quarter, the Hawks had to outscore the Pistons 34-19 in the fourth just to crawl within 11 points. Team captain Joe Johnson scored only 5 points (2-10), and when your team's best player has almost as many turnovers (3) as points, you're in trouble. Hawks coach Mike Woodson, who was talking playoffs after the previous night's victory over the 76ers, certainly wasn't talking about the playoffs last night. Rather, he inferred that the Hawks played the cheap hooker to the Piston's seedy pimp. Said Woodson: "They hit us tonight. If they hit you, you've got to hit back, and I don't think we did a good job with that."

Minnesota Timberwolves: When the Timberwolves look back on this game, assuming they have the heart to do so, they'll realize a few disturbing facts. First, Sebastian Telfair -- 16 points (6-13), 2 rebounds, 3 assists -- was their top performer. Second, Mark Madsen and Michael Doleac both made token appearances, combining for zero points on zero shot attempts in 19 minutes of "action." And third, Trevor Ariza played almost as many minutes (26) for the Lakers as Kobe Bryant (28). In a way, it's kind of amazing that this team has even won two games so far this season.

Fun fact: Telfair currently has more blocks on the season (3) than Zach Randolph (2).

Utah Jazz: The Jazz were firmly in control of their game against the Kings...until they allowed Sacramento to explode for 43 points in the fourth quarter. This was a classic example of a team running out of gas at the end of the second game of back-to-backs. But do you think Jerry Sloan gives a crap about tired players? Of course not. Said Sloan: "We can't guard anybody. When they shoot as many layups as they did, that is a problem." After a few more terse comments, Sloan stalked off to the dressing room to make Andre Kirilenko cry.

Fun fact: The Kings are only 7-10, but they're putting on a little mini-surge. They've won three of their last four games, and those wins have come against the Spurs, Rockets, and Jazz. And since their next game is in the Clippers, you can go ahead and put them down as winning four out of five.

Los Angeles Clippers: The Milwuakee Bucks, losers of four in a row, finally found a team they could beat last night, and that team was the Clippers. The "other" L.A. team has now lost six in a row and eight of nine. Remember how this team started out the season at 4-0? Well, they are who we thought they were.

Fun fact: Ruben Patterson, known in some circles as "The Kobe Stopper," played three whole minutes last night, contributing nothing but one lonely personal foul to the Clipper cause. In case you forgot, Patterson scored a career-high 14.7 PPG on 55 percent shooting last season, and the the Clips were pretty darned excited about signing him during the off-season. But becoming a Clipper has a way of negating a man's positive mojo. Case in point: Patterson is currently averaging 4.9 PPG on 46 percent shooting.

Anonymous said...
someone's got it out for randolph. criticism which he so undoubtedly deserves. then again, he IS making ostertag money
12/05/2007 2:41 PM

Anonymous said...
Excellent commercial. Amare had a nice game last night, but we need a couple more of those 42 and 13's before people start paying attention again. Especially when you have a 2 time MVP PG that continues to make this team mesh. Did I mention that those MVPs were back to back. Well, they were.

...As for the French Man, he boggles my mind. He has flashes of greatness...then will dissapear...and you are right basketbawful, its been the dissapearing most of this young season...and all of last season. I was pretty sure he actually had a vagina judging by his recent play, until I saw THIS PICTURE, after which I remembered he is a fat-ass, and a drunk Frency. He better be careful with that group of Panda's. They look cute and cudly, but I hear they are dangerous...who am I kidding, you go Diaw, I threw shame out the window years ago too. Maybe he thinks winter is for hibernating...he IS hanging out with some bears in that picture.

Seriously though. I am actually watching Boris kinda dominate right now...looking strong. I get more dissapointed then angry with Diaw though, because he does have great body control, touch, can dribble AND pass AND defend...I'm not ready to give up on him yet...I will stick by my guns and say he'll come around.....some day. Nobody listened to me about Barbosa, but they'll tell you they'de want him on their team now.
12/06/2007 12:07 AM

Basketbawful said...
anonymous -- It's not that I have it in for Randolph exactly, it's just that I find his lack of defensive and shot-blocking ability amusing. Especially for someone who's making Ostertag money.

mike -- The fact that you dropped Diaw to pick up Mike Dunleavy, and that is was probably a very good move, should make coach D'Antoni cry.

starang -- The thing that strikes me about that picture (which is hilarious) is how he's so totally focused on his drink. It's like the girl dangled it in front of him to get the picture...and it totally worked. In fact, she probably got him to take his shirt off with it.
12/06/2007 10:24 AM
Post a Comment
<< Home
Subscribe
RSS Feed
Mailing List