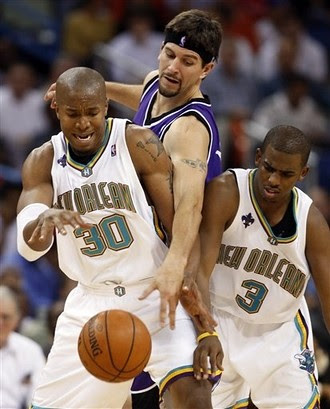 Season-openers are barely more meaningful than preseason games. Players are still working themselves into "game shape," coaches are still trying to determine the optimum eight or nine-man rotation, and everybody is just sort of trying to figure each other out and get it together. The upside is that the situation lends itself to plenty of stink-worthy performances we get to make fun of.

1. Lebron James: King James was the nearly unanimous preseason pick for the 2008 MVP award, but last night's performance wouldn't earn him a spot on the All-NBA Tenth Team: 10 points (2-for-11), 5 rebounds, 4 assists, and 5 turnovers. He also missed four of his 10 freethrows and both of this three-point attempts. James got into foul trouble in the first half and scored zero points as his team went down by 20 and never recovered. All the talk the last few weeks has been about whether Lebron's teammates can support him. Last night, the team must have been wondering whether he could support them.

2. Chicago Bulls: It was a bad day all around for the Bullies. They failed to sign Ben Gordon and Luol Deng to contract extensions. The Kobe trade rumors continued to swirl around the team, causing the usual needless distractions. Then they had to open their season in New Jersey, where they've lost the last hundred or whatever consecutive games. Naturally, the Nets jumped all over them and had the Bulls down 17 in the third quarter. The Bulls managed to rally and could have won the game in regulation, but Gordon -- the self-proclaimed "best player" on the team -- had his shot blocked by Vince Carter and Ben Wallace couldn't tip it in at the buzzer. Finally, the Bulls let Antoine Wright (who??) score 14 of his career-high 21 points in the fourth quarter and overtime to secure a 112-103 win for the Nets. Not an auspicious beginning for a team that many expect to make it to the NBA Finals.

3. Washington Wizards: The Wizards "defense" made Mike Dunleavy Jr. look like the second-coming of Larry Bird: 25 points (7-of-17), 12 rebounds, and 4 assists. Teams that give up career nights to Dunleavy cannot be trusted. That same "defense" sparked the resurrection of Jamaal Tinsley, who scored 16 of his 20 points in the fourth quarter and overtime as the Pacers ran away for a 119-110 victory. Tinsley also had 9 rebounds and 8 assists. Gilbert Arenas hit a three-pointer to send the game into overtime, but he hit only 10 of 25 shots, went 1-of-8 from three-point range, missed six freethrows, and committed 5 turnovers. Agent Zero was also responsible for guarding Tinsley.

4. Sacramento Kings: It's not like anybody outside of Sacramento really expected anything from the Kings this season, but watching them play last night was still pretty depressing. Without Mike Bibby (thumb injury) and Ron Artest (seven-game suspension for being an ass-hat), the Kings looked absolutely helpless against the New Orleans Hornets. Look at it this way, guys: Only 81 games left until summer vacation.

5. Kevin Durant: Considering it was his first ever regular season game, Durant played okay: 18 points (7-for-22), 5 rebounds, 1 assist, three steals. But his shooting was pretty obnoxious -- he also hit only 2-of-7 from three-point range -- and he let Carmelo Anthony shut him down. That's the same Carmelo who probably couldn't shut down Stephen Hawking, even if somebody stole the battery out of Hawking's wheelchair and set him on fire.