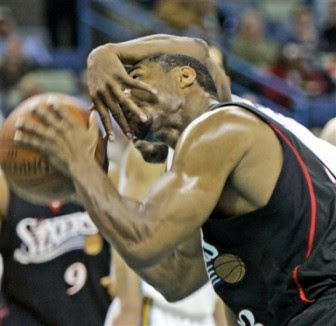 "Got your nose!!
Larry Hughes: The Cavs dropped a 117-116 overtime decision to the Magic, despite a virtuoso 39/14/15 performance from Lebron James. Cleveland might have pulled this one out if Hughes hadn't shot a pathetic 2-12 from the field. This guy is making $12 million this season. Shouldn't he be able to make a jumpshot too?

Andrea Bargnani: The Raptors' former number one overall draft pick scored 2 points on 1-11 shooting, as Utah edged Toronto 92-88. What's amazing is that Bargnani managed to suck that badly in only 15 minutes of action. When you average almost one missed shot per minute, well, that's not good. The kid was so far off last night that he probably missed the bench after Sam Mitchell yanked him out of the game. Meanwhile, Andre Kirilenko hit only one of six shots, but he had a team-high 11 assists. The Russian Rifle is now averaging 11 PPG, 7 RPG, 7 APG, 2.5 BPG, and almost 2 SPG. Looks like Sloan's compliments are working.

Indiana Pacers: The Pacers suffered their fifth straight loss after getting blown out by an equally awful Wizards team. You know what's wrong with the Pacers? Jermaine O'Neal. I'm completely serious. The Pacers started out the season on fire. Everybody was involved in the offense, cutting without the ball, passing, getting high percentage shots. It's no coincidence that O'Neal missed the first game and played a reduced role in the next couple. Now that he's back to getting big minutes and lots of shots, the team's offensive production has dropped. You know why? Because when the ball goes to him in the low post, it doesn't come back out, and then you have four other guys just standing around and watching him. I guess that would be okay if he hit a high percentage of his shots, but he's shooting 38 percent from the field! So sure, he may end up with All-Star, or close to All-Star numbers, but he's killing the rest of the team.

Vince Carter: Hmm, guess who was missing from the Celtics/Nets game last night? That's right, it was Vince "I just signed a huge contract extension so I'm going to stop caring" Carter. Yes, I know he was technically out with a sprained ankle, but he wasn't exactly lighting it up in the six games he did play: 17 PPG (on 39 percent shooting), 5 RPG, 4 APG. That's a pretty steep dropoff from last year's 25/6/5 (and 45 percent shooting). Can you say Contract Year Phenomenon? And is anyone the least bit surprised?

Miami Heat: Wow. Not even trash talk from Pat Riley and the return of Dwyane Wade could alter the Heat's trance-like play. Riley threatened to suit up and play after the previous night's defeat, and he went off again after the team's 104-95 loss to the Sonics: "Unless you feel like you have something at stake or something to lose as a player, then things won't change. If you don't feel like the Heat mean something to you...you have to have a real meeting with yourself about what you care about. I don't see a team that really feels like they have anything at stake here. They come in, they play, they get beat, they go home, they go out into the night." Way to toss your team to the wolves there, Pat. I'm sure they'll want to give you their best effort next time. Meanwhile, Smuch Parker, the team's big offseason pickup, hit zero of his four shots and is shooting 28 percent for the season.

Hornets / Sixers: Exhibit B in the case of "The NBA season is too damn long and has too many meaningless games."

Tracy McGrady: Well, T-Mac has officially suffered his first semi-serious injury of the season (strained right elbow). We all knew it was going to happen, we just didn't know when. Without their closer, the Rockets lost 93-90 to the Lakers. I feel bad for McGrady, but at least I feel better about advising my friend not to trade Duncan for McGrady in his fantasy league.

Phil Jackson: You know, I assumed that, after last season's "Tim Hardaway hates gay people" controversy, somebody as intelligent as Phil Jackson would know better than to make a gay joke during a postgame press conference. Well, I was wrong. Jackson has subsequently apologized to "any horses, Texans, cowboys or guys" that he might have offended, and I'm sure he was positively dripping with sincerity when he said that.

New York Knicks: The team fell to 2-5 after an 84-81 loss to the Clippers. On the bright side, they probably would have lost by more if Stephon Marbury had actually shown up and played. Wait...what? He did play? And everything's just fine between he and Isiah now? Are you kidding me? I can't believe this circus is still going on, and on, and on...

Golden State Warriors: Last year's feel-good team is this year's feel-awful team: 0-6 and about to embark on a five-game Eastern Conference road trip. The only good news for the Warriors is that their road trip includes games against the Knicks, Wizards, and 76ers. Do you think this team misses Jason Richardson? And Stephen Jackson? And a Don Nelson that actually gives a crap? I other news, has this team even played defense yet this season? They're giving up 118 PPG on 51 percent shooting, 46 from three-point range. They're also giving up 30 FT attempts per game, and their opponents are averaging 28 assists. They're getting outscored by 11 PPG and getting outrebounded by 10 RPG. That's it, I'm taking the "D" out of their name and giving it back to the Nuggets. From now on, these guys are the Golen State Warriors.

Anonymous said...
I'm glad to see you didn't make the same mistake and add Tim Duncan to your Worst of the Night section. Good thing to, because my fist is already balled-up and waiting. Big time.