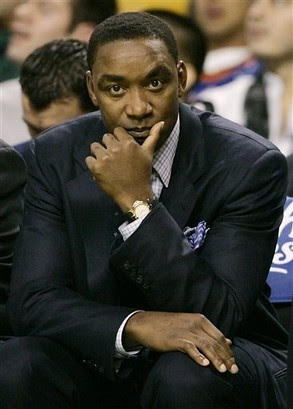 The waking nightmare continues...
Knicks / Celtics: Several hours before the tipoff of last night's game, Isiah Thomas expressed his deep and soulful feelings for the Green and White: "I have a great respect for Boston, a very healthy respect. But I don't like them. I don't like the Celtics. Because they were always good. And they're good again. So my hatred is that much more." How very Dark Lord Sauron of him.

Is there a stronger feeling than hate? Because if there is, Isiah must be feeling it today after the Celtics' pitiless butchering of his Knicks. Man, oh man. I haven't seen a beating that savage, that brutal, since the El Mozote Massacre or maybe Bambi versus Godzilla. Shouldn't there be a slaughter rule for games like this, or at least a safeword that teams can use when they've had enough? Now, I likes me a good beatdown as much as the next guy who hates the Knicks and absolutely despises Isiah Thomas. But sitting through that game was like watching the scene in Reservoir Dogs where Mr. Blond tortures that cop and then cuts his ear off. Repulsive, disturbing, and yet too sickly fascinating for me to look away.

What went wrong for the Knicks? Well, for one thing, their starting point guard had only 1 assist and three turnovers. Their "Twin Towers" of Eddy Curry and Zach Randolph combined to score 8 points on 3-21 shooting, and that was their strongest contribution. Quentin Richardson alone out-rebounded them (9 to 6) and little Freddy Jones out-blocked them (2 to zero). As a team, the Knicks shot 30 percent (23-76). Their quarter-by-quarter scoring was as follows: 16, 15, 10, 18. And they needed a 37-foot heave by Nate Robinson at the final buzzer just to reach 59 and thus avoid their lowest point total in the Shot Clock Era (which was 58 on December 15, 2000, against the Utah Jazz).

Never one to blame himself, Isiah was quick to point his wicked Finger of Judgement at his hapless team, complaining that the Knicks' first-half performance was "the most selfish" he had ever seen by a team. "I thought every single player was thinking about himself, as opposed to thinking about the team." After that inspiring halftime speech, the Knicks went out and scored 10 points in the third quarter. That's some coaching genius there, Isiah.

What's happening with the Knicks is just terrible, and I don't even like the Knicks. It's getting to the point that I'd even feel sorry for Kobe Bryant if he was a Knick. Okay, not really, but just the fact that I was able to type those words without vomiting really says something. It's just...just...gaaagh.

And here's the thing: The Celtics didn't really play all that well. I know that sounds crazy, but if you actually watched the game, you know it's true. I mean, Kevin Garnett took five shots. Brian Scalabrine played 22 minutes, and Glen "Big Baby" Davis played a team-high 30. Need I say more? Look, Fay Wray put up more of a fight when King Kong carried her to the top of the Empire State Building. Which begs the question: Have the Knicks quit on Isiah? Seriously, who freaking knows with this dysfunctional band of misfits.

Fun fact: Fred Jones has 5 blocks on the season. Zach Randolph has 1.

Raiders of the Lost Statistics: At the end of the game, Rajon Rondo chose to dribble out 24 of the final 26 seconds, committing a shot clock violation and giving the ball back to the Knicks rather than going for a 50-point win. That's a turnover, right? Well, apparently not, because every box score I checked -- ESPN, Yahoo, even the official NBA box score -- showed Rondo as having zero turnovers on the night. It makes you wonder, do the NBA's official statisticians give out mulligans for mercy plays like that? Does that ever happen when a player attempts a full or half-court heave at the end of a quarter or before halftime? Speaking of which, I've always felt there should be an official stat category for those meaningless, desperation shots so they don't count against a player's normal shooting percentages. Plus, it would be downright interesting to look at Lebron James' season stats and find out he was 3-for-25 on desperation shots. There should also be a special category of statistic that tells you how many games a team gives up at the end of the season. Like, the Spurs might win 61 games but still end the season on a 4-game losing streak because Gregg Popovich was resting Tim Duncan, Tony Parker, and Manu Ginobili. I mean, wouldn't you like to know that stuff?

Nuggets / Lakers: This game was proof of how much homecourt advantage means in the NBA. With little more than a half-hearted effort, Denver built a 12-point lead after the first quarter and yet ultimately lost by 28 points. Again, if you watched the game you could tell that the Nuggets just didn't bring it. The Lakers had way more energy; they were grabbing offensive rebounds (they had 17 on the night, six above their average), coming up with loose balls, drawing charges. In short, making all the hustle plays that win games. And Denver? They just gave up. How else do you explain them getting outscored 46-24 in the fourth quarter?

There was at least one Nugget who was fired up, though: Carmelo Anthony. He scored 23 points (11-15) and even had a couple steals before getting ejected with 6:18 remaining for giving Sasha Vujacic a chop block to the throat away from the ball. Anthony claims it wasn't intentional (but it was) and that Vujacic drew attention to the foul by flopping (which he did, laughably so). Said Vujacic: "I think I've got to give him a DVD of European soccer. Then he can really see flops. I think it was frustration on his part. He's one of the best players in the league. But we did an amazing job on defense against him by double-teaming him -- and that's why he tried to choke me. I was surprised that he grabbed me with his hand." Ha, ha, yeah, you go ahead and try to give Carmelo a soccer DVD and you'll probably get choked again. Or at the very least he'll bitchslap you from behind and then run away. Anyway, Kobe Bryant -- who totally travelled on a spectacular up-and-under in the third quarter -- didn't comment on the play, probably because of all the times he wanted to strangle Sasha.

Fun fact: I don't really have much to say about Golden State's over-the-knee spanking of Houston, except that our good buddy Austin Croshere won the Second (to the Knicks) Biggest Loser of the Night Award for posting an ultra-rare two trillion. Third Biggest Loser of the Night goes to Yao Ming, who got shut down by Al Harrington despite a 9-inch, 60-pound physical advantage.

Big Stinky Jerkface of the Night: That's right, I'm talking to you, NFL. Hey, let's put a marquee matchup between two 10-1 teams on the NFL network, which is like telling 99.9 percent of the world "Nyah, nyah, you can't watch this!" Great idea, NFL. Well, the Football Gods took their revenge for your hubris, striking down Brett Favre who -- according to your jersey sales -- is the most popular player in the league. Did you get the message? Or is it going to take a well-aimed lightning bolt to the testicles to teach you the error of your ways? Oh, and Brett's my fantasy QB, so thanks for costing me this week's game and officially eliminating me from playoff contention. [FlohtingPoint reminded me to mention this travesty.]

Unknown said...
I'd like to take a moment and thank the NFL Network for making me watch the Knicks game last night. I'd also like to thank them for my swollen tes-tes as a result of me punching myself in the junk repeatedly out of sheer boredom.
11/30/2007 10:26 AM

Basketbawful said...
floghting point -- On that subject, I'd like to thank the Football Gods for allowing Brett Favre, my fantasy QB, to get injured in the first quarter last night, ruining my bid to take down the top team in my league who, of course, has Tom Brady. If there was any justice in life, Brady would get hit by a truck or something in recompense.
11/30/2007 10:40 AM

Anonymous said...
Last night I was watching the basketball games, and afterwards, when KG, Pierce, Allen, Kobe and Odom didn't play in the fourth quarters, I thought... horrible night for TNT, great night for Basketbawful.
11/30/2007 11:47 AM

Basketbawful said...
likkyboomboomdown -- Dude, that made me laugh...and I never laugh. And it was great for content, but really, really bad for my eyes. And I swear, I was fighting to stay awake during the second half of the Celtics / Knicks game. When the sport I'm most passionate about and one of my all-time favorite teams is putting me to sleep, you know it's a bad game.
11/30/2007 12:00 PM

Anonymous said...
"Or at the very least he'll bitchslap you from behind and then run away"

Anonymous said...
For those who were still awake at the end of the Celtics/Knicks game, a little humor:

Anonymous said...
Not trying to leave a comment on that post, but there's no other place it seems to send you guys an email.

Check this out. It's manna from internet heaven.
www.dinosty.com.

Anonymous said...
About the stats thing...I remember in 2004 (my last fantasy nba team before this year) when I had Iverson. One game, they were getting blown out and when they inbounded to him with like 15 seconds left, he put the ball on the floor and walked off the court, resulting in an 8 second behind the court violation, getting charged with a TO. I remember this because, well, I got another TO from the night...I think he had 7.
12/02/2007 6:34 PM

Anonymous said...
regarding your lost turnover statistic, 5 second inbound violations, 8 second backcourt violations, and 24 second shot clock violations are team turnovers and not charged to invididuals. that would be why rondo had zero turnovers in all those box scores.
12/06/2007 8:35 PM
Post a Comment
<< Home
Subscribe
RSS Feed
Mailing List