Wednesday, February 28, 2007
Worst of the Night: Minnesota Timberwolves
By Basketbawful at 10:58 AM
1 comments 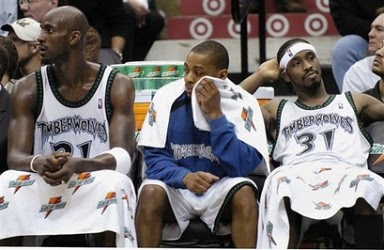 Does losing hurt? What do you think?

The Minnesota Timberwolves lost to the Dallas Mavericks last night. That, in and of itself, wasn't very surprising; Dallas is the best team in the league and riding a 13-game winning streak. What was surprising -- in that nauseous, "I'm about to projectile vomit" sort of way -- is that the Wolves only scored 65 points on 24-for-81 from the field, a brick-a-palooza that was "good" for a franchise-worst 29.6 percent shooting night. And this happened in Minnesota. Jesus, guys...the Dallas defense is good, but it's not that good...is it?!

I'd like to focus on the "franchise-worst" part for a second. I know some of you probably aren't aware of this, but the Timberwolves actually existed before Kevin Garnett (5-for-16 last night) was drafted into the league. And while the team hasn't ever been all that good with him (the 2003-04 season notwithstanding), they were even worse without him. The Pre-Garnett Era lasted six seasons, during which the team strung together win totals of 22, 29, 15, 19, 20, and 21 games. That 15-win team* featured a starting lineup of Tony Campbell, Pooh Richardson, Tyrone Corbin, Doug West, and Thurl Baily. Yup, that was their five best players.

My point? Despite the team's historical suckosity, this year's squad set an all-time franchise record for shooting ineptitude. Did I mention Kevin Garnett is widely hailed as a certain Hall-of-Famer and one of the greatest players of all time? He had only two assists last night, by the way. See, it's stuff like this that always makes me question how great K.G. really is. He has two other proven 20-point scorers on the team (Ricky Davis and Mike James). And yeah, those guys are overrated, but still, shouldn't someone of Garnett's stature be able to make those guys better instead of worse? Isn't that what the great players are supposed to do?

*During the 1991-92 season, the Timberwolves went 15-27. That was easily the worst record in the league, but the Lottery Gods chose to smite the Wolves, who recieved the third pick (behind Orlando and Charlotte) in the 1992 Draft. Thus, instead of Shaq or Alonzo Mourning, the Wolves got Christian Laettner. And that, my friends, is how the lottery can change the course of NBA history. Because you have to assume that if Minnesota had, say, drafted Shaq, their fortunes would have been drastically altered (even if Shaq still bolted for L.A. in free agency years later). It's not a stretch to say that, had that happened, K.G. never would have been drafted by Minnesota in 1995 (no way they would have been a lottery team with a young Shaq). And if he had gone elsewhere...who knows?


Runner up: "The Cancer" continues to consume the Indiana Pacers from the inside-out. Last night, they lost 103-91 to the Phoenix Suns. But Phoenix is the second-best team in the league, so there's no shame there, right? Wrong. The Pacers built an 18-point lead with five minutes to go in the third quarter, and then got outscored 44-15 the rest of the way (including 30-13 in the fourth quarter). This happened in Indianapolis. I'd like to blame all these crazy rumors about Reggie Miller possibly coming out of retirement to join the Mavericks (it'll never happen), but I'm afraid the Pacers just suck ass aren't that good.

I thought you would see it by yourself ... and I'm terribly sorry to always point my finger at your mistakes ... but the headline from this article misses an "r".

So this is not a commentary, just a friendly advice. Just delete it and produce an r ;-)