Hi everybody, and welcome to a special several centuries old Japanese poetry edition to Worst of the Night. When I was traveling around different Japanese monasteries in the early 70's, an event occurred that changed my life. It was a cloudy afternoon at the border of fall and winter and I was wandering around Lake Usorisan, deep in thought. The sun broke through the clouds and a single ray shone along the shore. I was following this light when I stumbled upon some marvelous caves. I entered into the darkness of a narrow passage and it was there that I discovered a glass jar set on a rock formation. Inside the jar were several pieces of parchment with writing on them.

I nervously brought these artifacts back with me through customs, and returning home set upon the task of translating them. To my delight, I realized that what I had found was a group of haiku, most likely written during the early 18th century, Japan's Edo period. Unfortunately, I lost most of these priceless treasures in a house fire that I started in 1983 when I shot my television during the final episode of MASH.

However, I had luckily been keeping one page in my glove compartment, so eight haiku survive. Reviewing them yesterday, I noticed an uncanny similarity between those that remain and the eight games played on Monday. I'll let you judge for yourself.

The initial part is clearly a reference to the windy city of Chicago and Derrick Rose's ACL injury. The final line, 'the grasshopper stirs', I believe refers to the victorious Celtics who share a hue with the noble insect. 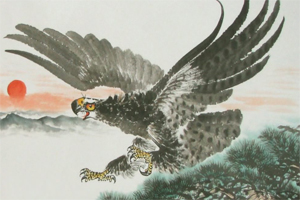 As a bird of prey, I'd think the eagle symbolizes the Raptors. The hunger mentioned is probably for a win. This game brought the Raptors to 1 and 7 on the season. The term Tsukimi, or Otsukimi refers to the Japanese tradition of moon viewing parties, held in autumn to celebrate the harvest. In the context of the game, this must signify the 3 overtimes it took for the contest to be decided. The final image of a flute playing long into the night hints at an eventual victory for the Jazz. True, flutes aren't necessarily the first instrument that comes to mind upon hearing the word "Jazz", but I don't think they had saxophones back then.


Snow on the mountain,
hardened when the sun has left,
radish for runny nose.

The snow on the mountain is likely a metaphor for Denver's mediocre start to the season, while the freezing over of the mountain after the sun has set relates to how the pain of this loss will remain for the Nuggets long after the Suns have moved on. Here, I've translated 水鼻 (wet nose) as the more familiar English idiom runny nose. This final image of a sick child represents Denver trying to find a cure for what ails them. 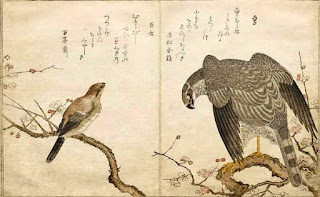 It doesn't take a forensic team to figure out who the Grey Frog Hawk is in this scenario. The autumn drizzle embodies the team from rainy Portland. "Grows cold" must mean the 36% the Blazers shot from the field, or their 6 of 23 outing from deep. I was surprised to see J.J. Hickson mentioned by name, but that is, after all, a lot of boards.

Apparently these poets of yesteryear were no stranger to bawfulness. The Broped did indeed have it's best night of the season, 51 points and 15 assists, while Ilyasova was dragged to victory, 2 points.

This is one of the more direct ones and doesn't really need an explanation.

Thunder 92, Pistons 90
Westbrook shoots a lot
they were playing the Pistons
only won by two.

It's not entirely a surprise that the global phenomenon that is LeBron James has permeated the Edo period, but I'm shocked they knew who Chandler Parsons was.

That concludes this historical journey. I hope it was enjoyable. Don't worry if it wasn't, because that fire in the '80s made sure this was a one time thing.


Jazz-Raptors: Aaron Gray immortalized a +2 suck in 4 minutes and 24 seconds. In 82 less seconds of play, his fellow Raptor Terrence Ross also went the +2 route and also bricked a shot, but they diverged when Aaron got a personal foul and Terrence got his shot blocked.

Thunder-Pistons: A turnover and two fouls sheared Jeremy Lamb, resulting in a +3 suck differential for the Thunder.

Heat-Rockets: Terrence Jones personified the ephemeral bloom of the hibiscus flower with a 31 second Mario for the Rockets.

Timberwolves-Mavericks: Greg Stiemsma fulfilled his 6:1 Voskuhl potential in the form of a brick, a turnover, and four personal fouls to a single rebound.

On a much less brilliant Bawful note, Reggie Williams calling a timeout when the Bobcats had none left, with a 2 point lead and 40 seconds to go in the game.

I thought that by-in-large I wouldn't put this win in the category of ugly in that we were in control. But the last six minutes was ugly for us. You really have to make that distinction. We came in here controlled the tempo, kept the crowd out of it and there are some ugly wins but this was the prettiest ugly woman I ever saw."
11/15/2012 5:26 AM

And this: "Unfortunately, I lost most of these priceless treasures in a house fire that I started in 1983 when I shot my television during the final episode of MASH."

made me lose my shit.

Now I have an interesting scenario for you: just like Jordan coming back to play for the Wizards, Matt McHale is going to look at the superlative quality of Glenn's posts, say "hell, I can do better than that," come out of retirement, boot all other posters from the blog, and take over. The move will cost him the torrid relationship with Scarlett Johanssen that led him to retire in the first place, but he's such a competitive psycho that he can't stand to see Glenn tearing it up.