Due to some technical issues involving my DVR, this post is coming to you a little late. However,  I was able to finally see Team USA dismantle the French National Team thanks to the power of a website that shall remain nameless. While watching the game, I took down some notes. Here for your enjoyment, are my observations. 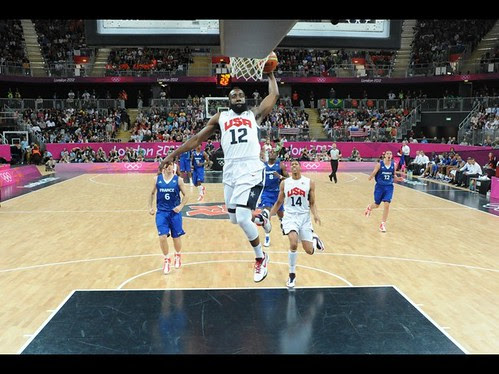 
• NBC shows us a graphic of current NBA players on the French Team. Tony Parker, Boris Diaw, Nando De Colo for the Spurs. Nick Batum for the Trailblazers, and Ronny Turiaf for the Clippers, and Kevin Seraphin for the Wizards.

• NBC does a little intro with each player. Kobe is sporting a bad ass goatee. Russell Westbrook is trying very hard to look intimidating, but it’s not working at all. Perhaps a goatee would do the trick.

• France is starting Batum, Parker, Diaw, Turiaf, and Michael Gelabale. A quick Google search showed his last role in the NBA was a practice squad member for the Lakers in 2009. I’m sure Kobe is just as clueless about his game as I am.

• We have refs from Brazil, Australia, and Slovenia. What language do they speak?

• Durant has shaved his head. Bron needs to take notes

• The announcers immediately point out Tony Parker’s Horace Grant look. Craig Sager references the nightclub incident with Drake and Chris Brown. What are the chances of Craig knowing the lyrics to “The Motto”

• France kicks things off with a turnover and foul. The next play is a Lebron to Tyson alley oop for an and 1.

• Durant with a fast break dunk off of a France turnover. Mrs. Obama is pleased.

• Lebron with a 3 quarters court bounce pass through traffic to a streaking Durant who flushes it on Batum for the and 1.

• Kobe catches at the top of the key and sizes up Gelabale. Gives a few crossover dribbles and drives drawing the foul. This is clearly the premier match up of the game.

• Nando De Colo tosses the ball to a guy sitting at the scorer’s table, this after badly bricking a wide open three. I’m calling it now: He won’t play more than 2 minutes per game for the Spurs next season.

• Deron Williams is hounding Tony Parker up the floor and suddenly gets a face full of Diaw’s tits on a hard screen.

• Carmelo takes advantage of the no goaltending rule by swatting away a bouncy Tony Parker free throw.

• Pietrus gets an offensive rebound and put back; brining the score to 20-17 USA. For the record this is Florent Pietrus, younger brother of Mickael Pietrus. He happens to look like half Mickael Pietrus, half Tony Allen.

• Yannick Bokolo buries a three at the buzzer to bring the score to 22-21 at the end on the first.


• Kobe hits a catch and shoot three on a drive and kick from CP3. On the jog back you can almost hear him cursing David Stern.

• Westbrook airballs a three. I think he’s now 0-2 from the floor for so far. I expect Westbrook to take SEVERAL more attempts throughout this game.

• Diaw makes a nice post move, yet because he has the athleticism of a toddler, he gets his shot tossed to half court by Durant

• After a lay in by Kevin Love, team USA gets hit with a tech for taunting. I’m going to assume it had to do with Parker’s goggles.

• Deron Williams throws a lob to Kevin Love which he barley rolls over the rim. Its moments like these that make me really appreciate Blake Griffin.

• Kevin Love gets posted up and scored on by Ali Traore. Love by the way is looking more and more like Justin Timberlake by the day.

• Harden delivers a bullet to Lebron for the back door slam. 50-36 USA.


• Craig Sager is courtside forced to wear a very toned down blue USA Olympic polo. He’s livid on the inside.

• Kobe tosses Batum to the ground on an inbounds play and gets called for the foul. Yet he’s genuinely surprised.

• Batum grabs an offensive rebound, falls to floor and then appears to get raped by Chandler and Chris Paul. During his flailing the ref says his toe touched the baseline. USA ball.

• Deron Williams throws a lob to Lebron. On the replay you can see several veins in Diaw’s head as he maxes out his vert at 5 inches while trying to block it. I love HD.

• With two hands Lebron flicks a laser to a cutting Carmelo for the dunk.

• And here it is. The topic of the Dream Team vs the 2012 team finally emerges. Don’t know what took so long.

• Kevin Love dive cuts and throws down a pedestrian one hand dunk. The bench rises to their feet in celebration. I’m really missing Blake now. I think I need a 15 minute break to watch some of his mixes on YouTube.

• Kevin Seraphin tries to post up Melo. He somehow shoots an airball; Melo engulfs the rebound and then screams “GET THE FUCK OUTTA HERE”. So much for sportsmanship and goodwill.

• Davis gets posted up and scored on by the much larger Ali Traeore.

• Ali tries to post on Davis again and get his shot rejected.

• De Colo drains a three. Now that the jitters are out of the way, I’m sure he’s gonna start ballin out.

• Harden leaks out on a fast break and throws down a filthy one hand tomahawk. 89-62.

• Gelabale pump fakes Westbrook, drives baseline and hit the layup. Afterwards he glares at Kobe on the bench. (I made that last part up)

• Diaw schools Davis on the block for a nice reverse layup.

• Diaw bulldozes the lane and hit another layup.

Preveen said...
you missed the repeated attempts to get Davis an Ally-oop, like some kinda All-Star game, but this is good stuff. Exactly the kinda writing I come to Baweful for. The descriptions for Diaw's screen and Parker glaring at Turiaf had me laughing at work, so good job!

senormedia said...
"Deron Williams throws a lob to Kevin Love which he barley rolls over the rim."

Yum, I love a good barley roll for breakfast...

Raymond Blitzfucker said...
Nothing on Deron William's extraordinary bawful showing in the 1st Qtr? He managed to get a shot blocked, got call for traveling twice and insulted the Queen in a 2 minute interval.
Oh, and Turiaf being forced to be the primary offensive option of the French team.
7/31/2012 10:06 AM

Anonymous said...
I didn't watch the game and I immediately knew what you mean with that Tony Parker hands on the hips thing. He does it on the Spurs as well. It doesn't get much frenchier than that.
7/31/2012 2:04 PM