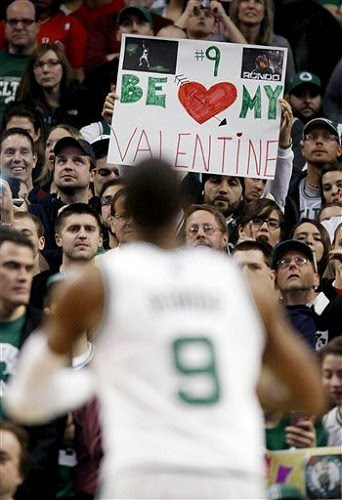 I think we found a guy who's an even bigger Rajon Rondo fan than me...

Pretty much the most bawful sentence I can remember reading: "Former Memphis guard Roburt Sallie cut from Spanish team for concealing that he was taking penis enlargement pills."

Also, Jay Caspian Kang's "Person of Interest" series continues with a nice look at Jeremy Lin. I have to say, I am fully on the Linsanity bandwagon. I watched the Lakers/Knicks game the other night while I was texting with my girlfriend who loves college ball but doesn't care at all about the NBA. It took everything I had in me to not constantly say "WOAH, you should have seen that spin move into the paint Lin just did!" He's taken one of the bawful trainwreck teams and made them fun to watch again. I don't even care so much if they win or lose. I'm just happy they're entertaining. 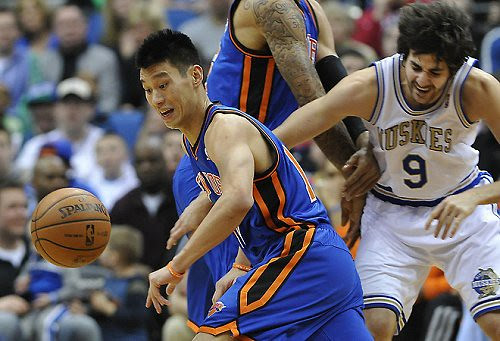 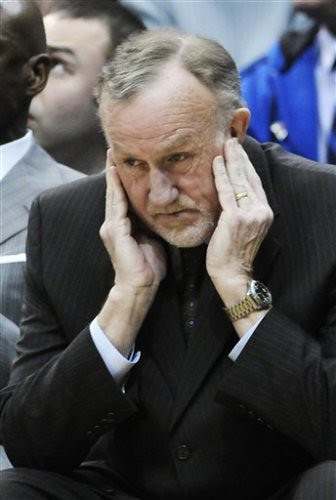 Rick Adelman tries to telepathically will the ball into the net 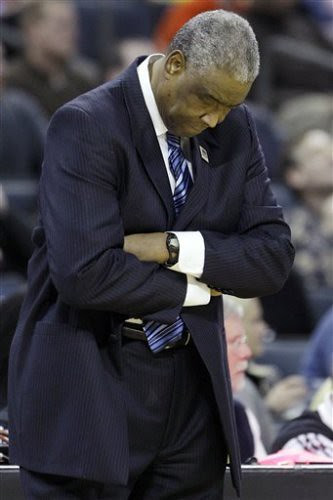 Really feeling bad for Paul Silas at this point, you guys 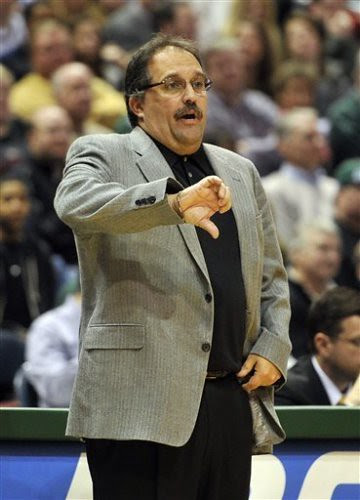 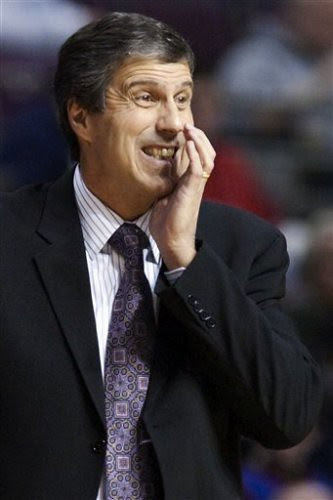 Randy Wittman's only been on the job for a few weeks, and the Generals have already driven him mad 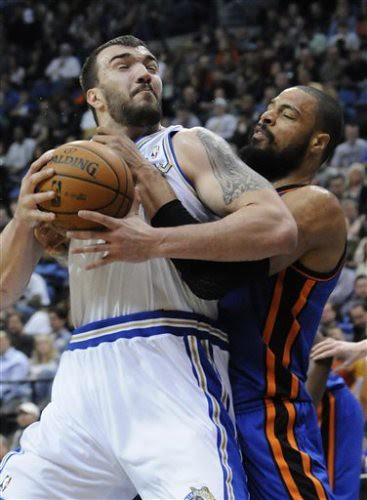 Hey, shouldn't you guys be saving this action for Valentine's Day?

Timberwolves at Magic, NBA TV, 7:00pm: Our resident documenter of all things lacktion Chris mentioned he was considering going to a restaurant called Rubio's for dinner tonight. It got me thinking... In honor of Ricky Rubio, Rubio's prices should all end in prices like $4.90, so when they give you your food and you pay with a five, they're dishing out dimes.

Meanwhile, according to ESPN's Chris Palmer: "It's waaay early but injuries will be the only thing preventing Ricky Rubio from becoming the league's all-time assist leader."

What?? I'm sorry, but what?? Methinks Chris Palmer might be jumping to conclusions just a little bit.

Suns at Warriors, NBA TV, 10:30pm: Both of these teams are actually playing quality basketball right now. Am I dreaming? Did someone slip something in my coffee this morning?

76ers at Bobcraps, 7:00pm: The Bobcraps have struggled lately, averaging just 77 points and 37 percent shooting in their last six games. And now they get to play one of the best defensive teams. I'm sure this one will be just THRILLING to watch.

Jazz at Hornets, 8:00pm: Well, if you're going to be doing a back-to-back-to-back stretch all on the road, I guess New Orleans is a pretty good place to go. An easy W if you even halfway show up AND delicious food. BRB, Googling cajun food recipes...

Heat at Bucks, 8:00pm: The Heat need to win this one to avoid a season sweep. Yes, you read that right.

Clippers at Mavericks, 8:30pm: The last time the Clippers beat the Mavericks when Dirk Nowitzki was in the game? 2003. Yes, that is nearly a decade. Just for a little refresher if you've already forgotten what the Clippers used to be like.

Czernobog said...
One of the worst things for me about being a Raps fan O(a Raps fan) is that I know that on the very rare occasion that my team beats the Celtics, Basketbawful is sure to keep mum about it. We beat them so rarely it makes Haley's comet seem like a paper route, but the most important basketball-related publication on the net simply refuses to acknowledge it when it happens. It's disheartening.
2/13/2012 7:26 PM

Silvio said...
Bobcraps are rock bottom, 3-25 W-L, since DJ Augustin went down with toe injury, 0-11 (average score in those 11 games is 80-100, in first 17, still bawful but better 91-101), losing streak is at 15 now. That's even bellow Generals' level (their road losing streaks are impressive, but at home they win every now and then) , only Nyets before Deron could match that.

Iti s exactly what one would expect with MJ running the show. Diaw was 4th/5th option in Suns, that's what Henderson, DJ Augustin would be in good or solid team (Kemba Walker too, when he develops) = NBA starters, but that's about it, not players that can carry team. Bobcraps has no player that could be 1st option, there's no Deron, Bargnani, Tyreke or Curry, no young leader like Wall, Irving or Rubio. Other players are mainly bruisers. Maggette is their go-to-guy. Uh, good luck with that. Don't tell me that they're in rebuilding mode, it's strange when rebuilding lasts for decades.

Larry Brown influenced MJ, old school defense-first coach get what he wanted: obedient, no-nonsense, defensive-minded players. MJ liked the fact that in a process franchise get rid of some - not necessarily bad - but big contracts. He's cheap, there's no other word to describe it. After LB departed, they brought in Paul Silas, offensive minded coach, what can he do with such personnel? I mean, even Mike D'Antoni couldn't squeeze any offense out of those lumberjacks ... and unlike Silas, Mike's talented. In Larry's term they sacrificed offense to improve defense. Nowadays their defense sucks, while offense remained bawful.

According to 82games.com only player on the team with positive rating is DJ Augustin ... and he's injured for some time now. That's unbelievable hard to achieve, 13-of-14 players to have negative impact on team's score - it takes special one to gather such roster.
Besides DJ, only one that statistically outproduces direct opponent is Derrick Brown. Only other player to be not total waste (statistically), is Diaw.
http://www.82games.com/1112/1112CHA.HTM
2/14/2012 5:54 AM

JJ said...
Maybe I don't understand how basketball franchise accounting works. I can understand trying not to overpay players if you're a small city franchise. But, if you keep acting cheap and your team is always performing horribly, don't your ticket sales and popularity go down so you lose money anyway? If MJ just wanted to make money by not spending money, he should not have bought the team. That would have saved him hundreds of millions.
2/14/2012 9:10 AM

Wormboy said...
@Czernobog: nicely posted. My heart goes out to you.

On another note, the Jeremy Lin phenomenon has certainly been one of the more entertaining ones of this season. I assume he will regress to the mean at least somewhat, though at least temporarily having a finisher like Amar''''e may boost his assist rate. Me, I'm betting that his numbers plummet when Carmelo "the gravitational singularity" Anthony returns. Still, fun to watch, and I'll enjoy my opinion of Anthony being vindicated: he learned to be a black hole team cancer at the knee of the best: Allen Iverson. In fact, the Denver management intentionally ruined Melo be bringing AI in to "mentor" him, only years later realizing that perhaps a team-first guy like Billups might be a better role model.

Czernobog said...
@Wormboy: I'd hesitate to dump Carmelo's character on the Shoulders of AI and the Nuggets' management, though I've never really watched him before he got to the NBA, so you may well know more than I do.
2/14/2012 5:08 PM

AK Dave said...
That noise you just heard was the internet exploding after Lin hit a game-winner against Toronto.
2/14/2012 8:40 PM

mikeyb said...
Congrats to Ben Wallace, 1055 career games played, more than any other undrafted player in NBA history. In true bawful fashion, Big Ben hit a 3 tonight (the 7th of his career, I looked it up lol). In other thoughts, Linsanity! I hope it never stops! And can we also give James Harden the nickname "Scruffy"? I think Scruffy Harden has a nice ring to it. Happy V-Day
2/14/2012 10:26 PM

mikeyb said...
Allen Iverson blows through $154 million??? Wish I had those kinda problems...

Wormboy said...
@ Czernobog: in the spirit of Basketbawful, I'm being hyperbolic. Melo had some character problems at Syracuse, and had the hanging out with gangster video thing early on. But would you really want Allen "it's just practice" Iverson as the veteran leadership influence on your young star with shaky character? Bad call with a roster with some other loose cannons as well.

Too bad a McDyess wasn't still in Denver at the time (though pre-knee destruction McDyess would not have led to a lottery team). I think with a level-headed star role model, Melo could have been a very different player than "slightly chubby Kobe 2.0"

We shouldn't underestimate the effect of such things. I remember a story early after KG landed in Boston (before he won a ring and we all realized that his psycho bit was actually transcendent dickishness). They were outside a bar, some fans heckled Pierce, who started to walk over there. KG stopped him and said, "that's not what we're about" or something to that effect. You think these things don't matter? Boston never wins a ring without that kind of leadership.

And I'll add that these are the things I watch NBA for. Male soap opera. I look for novel-like story arcs: failure, redemption, transformation, etc. This is why the Jeremy Lin thing is so awesome: who doesn't love the story of an unscouted guy all of a sudden exploding in the NBA?
2/15/2012 12:24 PM

Best blues name of all time is, of course, Muddy Waters.