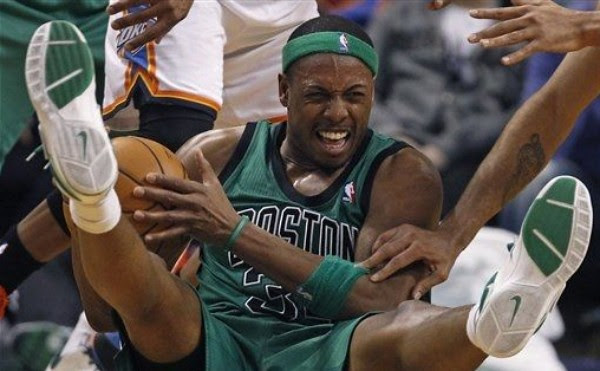 Remember: The Bulls beat the Grizzlies by 40 points on New Years Day. The Memphis players weren't going to forget that. No way. No how.

And before the game, Mike Conley made sure of it: "I said, 'Let's not forget what happened. That was the last thing I said to them: 'That was an embarrassing loss. Let's go out there and just play hard and leave it all out there on the court.' I thought guys really took that to heart, especially in the first 6-7 minutes of the game."

They sure did. And the Rose-less Bulls weren't ready for it.

The numbers are as ugly as the bugs you find under a rock.

The Bulls rank first in Opponents PPG (85.0) and second in both Points Per Shot (1.03) and Opponents Adjusted Field Goal Percentage (.443). But the Grizzlies finished with 102 points on 54 percent shooting.

The Bulls lead the league in rebounds per game (46.6) and, more importantly, rebound differential (+8.2). But Memphis won the rebounding battle 46-34. And the Grizzlies' Offensive Rebounding Rate was unbelievable 41.7.

Memphis scored 62 points in the paint and converted Chicago's 19 turnovers into 26 points going the other way.

Even worse, New York's offense is looking sadder than a shriveled testicle. New The Bricks -- playing at home by the way -- managed a meager 93 points on 41 percent shooting while going only 5-for-20 from downtown.

Said Carmelo Anthony: "We're not making no shots right now. It seems like we can't shoot the ball in the ocean right now. Everybody. We get stops and then at the other end we can't score the basketball. I don't know what is it. We've just got to get out of that shooting slump. We've got to start making shots and it makes it easy on the defensive end. We are playing defense but when you can't score the basketball it makes it hard."

Playing defense? The Magic drilled 17 threes, 'Melo. And, again, Ryan Anderson had a career-high 30 points. Plus J.J. Redick had 21. When was the last time two players that pasty combined for 50+ points?

The Milwaukee Bucks: Huh. 82 points in a double-digit road loss. Yep. Those are the Bucks I know and hate to watch on live TV. It's like a double-fisted punch to both eyes. Every second of their dreadful molasses-like offense feels like two minutes of fear and shame. They scar my heart, but I digress.

The Deer In The Headlights fell to 0-8 on the road despite Andrew Bogut's double-double (20 points and 11 rebounds).

Said Milwaukee coach Scott Skiles: "It's not hard finding a guy to play well. We've got to find multiple guys to play well."

I've seen your lineup, Scott. You don't have multiple guys who can play well.

The Washington Wizards Generals: Another double-digit home loss for the Generals, who dropped to an NBA-worst 1-12, including 1-6 at the Verizon Center. The fact that they only managed 16 assists on 39 made baskets says a lot. And so does this...

JaVale McGee: When your team is 1-12, you probably shouldn't be pulling shenanigans like this:


And McGee's coach sure didn't think so.

Said Flip Saunders: "That's unacceptable. Maybe I'm too old school. Save that for the All-Star game. We have some players that look for highlights instead of substance."

In related news, JaVale spent the last nine minutes of the game scrubbing the bench with his booty.

Said McGee: "Apparently if you get a fast break and throw it off the backboard in the third quarter and you're 1-11, you're not supposed to do stuff like that. I feel like I was trying to get the team hyped and make a good play. I felt like we did that -- and we went on a run there."

As the AP recap points out, Washington's run didn't start until the fourth quarter...when McGee was sucking down Gatorade on the sidelines.


The Charlotte Bobcats: It seems fitting that, after Michael Jordan spent his legendary career tormenting Cleveland, the Cadavers spanked MJ's Bobkitten's at their own place last night. Charlotte shot 29 percent in the second half and bricked 12 free throws on the night.

Said Gerald Henderson: "It was a tough one because we did come out with energy in the first half. You need to continue that at the start of the third quarter and we didn't have that great of a third and quarter and that led into the fourth. And we just couldn't come up with the plays."

Hey, at least Mardi Gras is only a month away. I'll be there. Anybody else? If so, I'll see you at Razzoo or Cat's Meow. Or possibly face down and unmoving in a pile of street trash.

Said Hornets coach Monty Williams: "We've hit a funk. There's no denying that. But you have to continue to compete. We get to play basketball and we get paid. ... A lot of people would love to have our problems. ... You've got to keep fighting and value your occupation and take it seriously."

Added Chris Kaman: "We've all got to look in the mirror and see where we need to step up. It's definitely tough. We've been doing a good job defensively so that's all you can ask for. We've got to get better with our offense and do a better job taking care of the basketball."

Related stats: 19 turnovers and 0-for-9 from beyond the arc. Oh, and seven missed free throws in a seven-point loss.

The New Jersey Nyets: Remember: The Nyets are on Dwight Howard's "Trade me!" wish list while the Bulls are not. Good call, Dwight. Although I wonder if that's still the case after the Clippers -- sans Chris Paul (bad hammy) -- sunk New Jersey to 3-11 on the season.

Yes, the Nyets came back from 18 down to tie it up in the fourth, but they lost. To the Clippers. Without Chris Paul.

The script has flipped. Now, even with Deron Williams, it's the Nyets who are who we thought they were.

Blake Griffin, unintentionally dirty quote machine: "We did a good job of pulling it out."

Avery Johnson, unintentionally dirty quote machine: "Blake Griffin is just a handful in so many ways."

Said Craptors coach Dwane Casey: "It sounds like a broken record, but I thought our guys competed. We're truly missing our players, but that's no excuse. There's only so much you can ask for from certain players. That's not their role."

No excuses. But, wait, excuses.

Added Jose Calderon: "I don't want to make excuses, but we're a young team and we have a new coach. Maybe we need some practice. Hopefully we can get on the same page. Sometimes we turn the ball over because we're trying to do too much."

No excuses. But, wait, more excuses.

(By the way, it's hard to make non-excuses when facing a Hawks team that's missing Al Horford and Joe Johnson.)

The Boston Celtics: The Celtics hung in and fought the good fight, but they lost at home to the Thunder anyway, dropping to 4-8 on the season and suffering their first five-game losing streak of the Allen/Garnett/Pierce era.

Adding insult to injury, this game put last season's trading away of Kendrick Perkins under the microscope again. Remember: Perk was traded for Nenad Krstic (playing overseas) and Jeff Green (off the team)...which means he was given away for absolutely nothing. Which was precisely what Danny Ainge had been trying to avoid by trading him.

Said Paul Pierce: "None of us likes to lose; that's the frustrating part. I think I like where we are headed, there are just little things that are really killing us."

The little things? Like shooting 39 percent? Committing 19 turnovers? KG looking like he aged 85 years during the lockout? Seriously, if Garnett could still jump, I'd have expect him to explode into dust on landing. Oh. Right. Maybe that's why he's not jumping anymore.

The Exremento Kings: Last night's double-digit loss to the Minnesota Timberwolves was a sign that the Kings really suck.

Said Sactown coach Keith Smart: "We've got to grow up. Our team has to grow up fast. ... I've got the simplest offense you can run. You just move it to a spot and move it to the next spot. But for whatever reason we're trying to make the play ourselves with the defense set, looking at the basketball."

Tyreke Evans nearly had a Jason Kidd Triple Double -- 10 points, 9 assists, 8 rebounds -- but committed 5 TOs and shot 3-for-11. And a few times, Ricky Rubio made him look kinda silly.

Said The Freak: "Once we got down, we just tried to take shots we don't usually take. We've got to find a better way to swing the ball a few times and take better shots."

Huh. I didn't think there as a shot Tyreke didn't usually take...

The Dallas Mavericks: They played well enough to potentially pull out this game or at least send it to overtime. But, damn it all, you cannot leave Derek Fisher open for a three. I don't care what his season averages are. Dude hits big shots, especially when left wide open. And Dirk's pathetic non-closeout was the worst. Frankly, the Mavs would have been better letting Kobe jack up a contested jumper than letting Fish get a wide open look.


The ending of the game was the definition of bawful: An ice-cold Vince Carter coming off the bench to launch a godawful three-point brick and injuring himself in the process. That ending could hardly have been more Vince Cartery.

Bulls-Grizzlies: Sam Young bricked it up once in 150 seconds and also took a rejection for a +2 suck differential.

Bucks-Sixers: Darington Hobson went on the hunt for plenty of pennies and ended up with a 2.3 trillion (139 seconds)!

Craptors-Hawks: Jason Collins cut away at a board and two assists in 13:02 with three fouls for a 3:1 Voskuhl, while fellow dirty bird Jannero Pargo fouled and bricked once each in 5:12 for a +2.

Purple Paupers-Wolves: Darko Milicic had another mild night as Minnesota's big man, marring a board with three lost rocks and a foul for a 4:1 Voskuhl in 15:11.

msk said...
My favorite part of the quintessential Vince Carter game-ending sequence was how he landed and watched the shot, and as soon as it clanged began to limp dramatically. Bawful perfection.
1/17/2012 11:15 AM

Ebb said...
Staredown after a dunk on Griffin and now a 360 teabag on Mcgee? Chandler Parsons is clearly on a quest to posterize on all of last year's Allstar Slam Dunk contestants.
1/17/2012 11:40 AM

Fishy said...
That Lakers/Mavs game was absolutely terrible.. I'm glad my team won but neither one deserved to. One probably wouldn't guess that one team won back-to-back championships within the last 3 years and the other one is the defending champs.. looked more like a Kings/Nets games but worse
1/17/2012 1:01 PM

Anonymous said...
Yeah I expected more depth in the review of that horrendous Mavs/Lakers game. That was probably the worst NBA game of the year so far and I've been forced to watch a bunch of Wizards games.

Oh well, in the NBA of 2012 there will be plenty of other games where both teams are too tired to play anything resembling basketball and will combine for 36%. That's what we have to look forward to this year.
1/17/2012 3:00 PM

I just thought the goddamn same thing about the Nyets record...