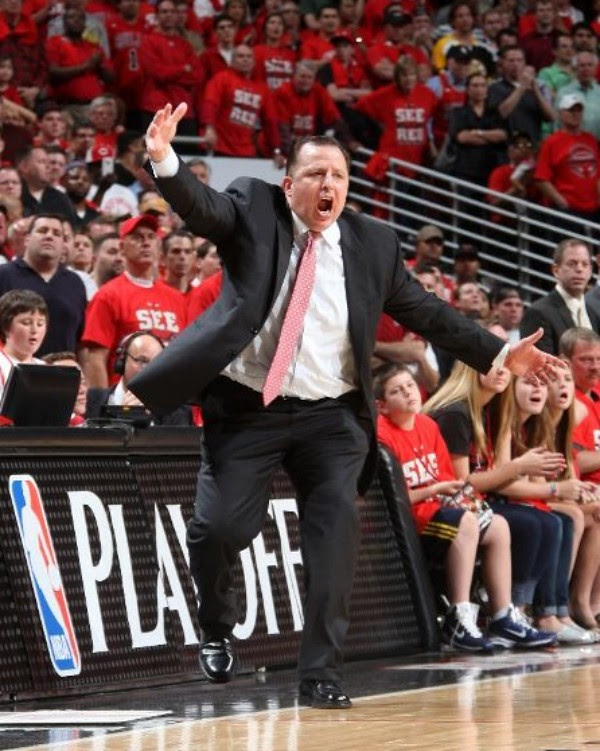 Is Thibs auditioning for the opening sequence of Zombieland 2?
The Atlanta Hawks: Well, for starters, Carlos Boozer dunked on them.


At this point, between his slump and the torn toe ligaments, getting dunked on by Boozington is like letting an 80-year-old grandmother go over the top on you in an arm wrestling match.

Chicago's defense through three quarters: For the first 36 minutes, the Hawks shot 53 percent from the field. And, actually, Chicago's D let the Atlantean's knock down 56 percent of their two-pointers (33-for-59) and convert an astonishing 15 of their 18 attempts at the rim. Good thing the Hawks were broke from three-point range (1-for-12).

Chicago's defense on Jeff Teague: Little dude flat out kept the Hawks in this game by scoring a team-high 21 points on 8-for-11 from the field and 5-for-7 at the line. He also had a team-best 7 assists and went 5-for-5 at the rim. Atlanta might have had a chance if not for the following four factors:

Factor 1 -- Joe Johnson: The 120 Million Dollar Man once again played like a third or fourth banana...assuming that banana had been half-peeled and left in the sun for a couple hours. Joe finished with 15 points on 6-for-15 shooting in 41 minutes. He was 1-for-5 from downtown and had only 3 assists and 2 rebounds. Still, Johnson wasn't half as bad as...

Factor 3 -- Atlanta's fourth quarter offense: During the final 12 minutes, the Dirty Birdies scored only 15 points on 5-for-16 shooting. They committed 5 turnovers -- including one shot clock violation -- and got 2 shots blocked. They jacked up four three-pointers and made zero of them.

Bulls coach Tom Thibodeau went with a fourth quarter lineup of D-Rose, Lu Deng, Omer Asik, Ronnie Brewer and Taj Gibson. That unit straight up shut the Hawks down. It probably didn't help that -- because Atlanta has no bench -- Hawks coach Larry Drew had to play Horford, Johnson and Teague 40+ minutes each. And Smith played 39 minutes.

Factor 4 -- Atlanta's fourth quarter defense on Taj Gibson: The fact that Derrick Rose (33 points, 9 assists, +17) torched the Hawks with 11 points and 3 assists in the fourth quarter isn't all surprising. But Gibson also lit 'em up for 11 fourth quarter points. THE RISE OF TAJ!

Luol Deng, poster boy: Uh, Lu, you don't need to get out on him. Trust me, you want Josh Smith shooting jumpers.


Not sure what that was all about, really. It sort of looked like Boozer thought Smith was going to come down on him and stuck out a protective arm...only Smith landed safely and walked right into Boozer's 'bow.

Said Smith: "I dunked the basketball and I go to turn and he just cleared me with an elbow to the jaw. Nobody is going to do that to me. I don't care who you are. I'm a man first."

Wow. That line was so macho, the woman sitting across from me on the train just grew a tuft of chest hair.

Josh Smith's shot versus Omer Asik's hand: Get out, Josh. Get out.

Benny the Bull: Hey! That's a waste of some perfectly good popcorn.

andres said...
one question are you going to make a post tommorrow?
Because the heat are going to beat the celtics and y thik this blog is a little green
5/11/2011 10:30 AM

TeamD said...
There's something KG douchy about Thibideau, not sure what is it but he makes me angry for some reason whenever i watch him.
5/11/2011 10:35 AM

Anonymous said...
"It sort of looked like Boozer thought Smith was going to come down on him and stuck out a protective arm...only Smith landed safely and walked right into Boozer's 'bow."

TransINSANO said...
You gotta do that in the visitor's section, Benny!

And without drawing attention to your illegitimate calf in the stands. Apparently popcorn isn't the only thing Benny's been recklessly throwing around.

@andres: C'mon, you can't blame Bawful for putting a full-blooded Celtics fan in charge of writing a WotN that was potentially going to be be a eulogy for their season the night after a gut-wrenching loss... Well, I guess you can, that probably wasn't the best plan.

Man, if the Heat finish off the Celtics and then dispatch the Bulls, are they going to truly supplant the Lakers as Bawful Enemy #1? I feel like we're losing more than the championship this year, but our place in the league; quick, Bynum, rip your shirt off and power slam D Wade while we're still in this thing, but watch out for his hurricane elbow finsher, only one man could survive that twister!
5/11/2011 12:30 PM

Anonymous said...
oh man boozer knew what he was doing.
it's like that guy that constantly dunks on u and you throw your elbows up knowing exactly where he's going to land and run off to (after you dunk you turn around and play defence right?)
5/11/2011 1:32 PM

Anonymous said...
...don't you hate it when you innocently have your elbow out, protecting your life from death-from-above, then someone lands nearby and walks towards your elbow, punching it with their chin? Bawful gives Tommy point to innocent, brave boozer!
5/11/2011 2:17 PM

Wormboy said...
@TeamD: "There's something KG douchy about Thibideau, not sure what is it but he makes me angry for some reason whenever i watch him."

But seriously, I don't see it; he's just another hugely tense coach committing Suicide Through Stress. I will say some things I don't like about Thibs (not necessarily in this order.)
1) He's kind of grossly fat. Some guys are just beefy, and some guys look like tubes of gravy. Thibs is the latter (I know I'm not being nice, but it is what it is.)
2) He does about a 6 inch front to back comb-over. W. T. F. Do you think that because you do this we don't notice you are bald? That is somehow makes you look better? And guys who do this don't wash their hair as much, presumably because they think they'll lose it faster. Mmm, long greasy strands! When will men learn that HIDING male pattern baldness looks far worse than the baldness itself? {Oh, and we're about 1-2 years from "Coach Spo" being in the real pattern baldness phase and not in the transition phase where his front hairline stampedes posteriorly. His "combed forward and artfully mussed" hair isn't quite disguising it now, but soon it will look spectacularly bad.}
3) Not enough ball movement in the Bulls offense. Get some good schemes and resort to Rose if they fail. Wide-open shots by medium NBA players are ALWAYS to be desired over contested shots from a star. Witness Dallas against the Lakers; how many wide open shots did Dallas get? Otherwise, we're looking at an Eastern Lakers without the length. Because, let's face it, Boozer is a spectacular disappointment. Maybe the Bulls should wait until his next contract year for a real run at the title.
5/11/2011 5:47 PM

Czernobog said...
Boozer didn't seem to be looking when the contact was made, but he was a little too cavalier with that forearm. Hard to tell.

Let's hope he stays in last night's form against the Nazgul.