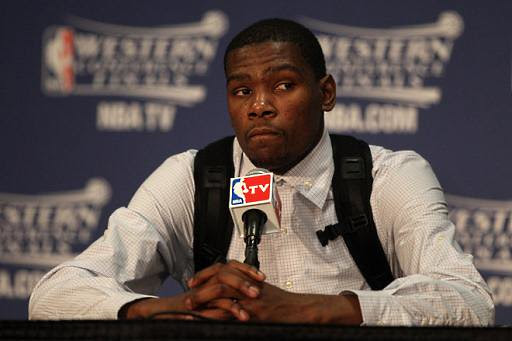 "Hmm... I wonder where I can get a sweet lunchbox to go with my backpack..."
In NBA tattoo news (that amazingly does not include Birdman Andersen), Monta Ellis got a forest tattooed on his chest. That's some serious attention to detail. You can almost expect a squirrel to come scampering out of his jersey during a game next season. 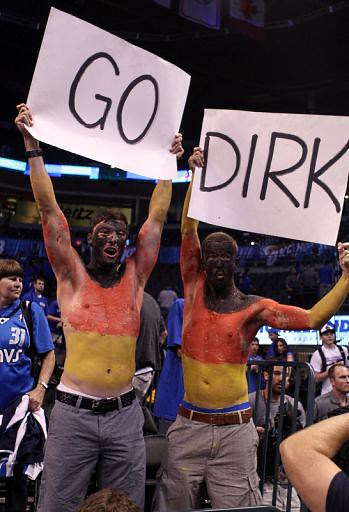 Okay, points for creativity, I guess? 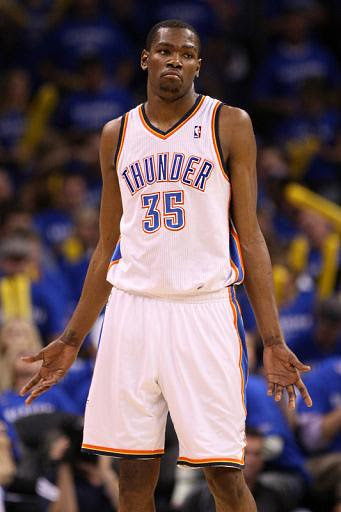 I guess Durant's less impressed by your body paint than I am. Sorry dudes. 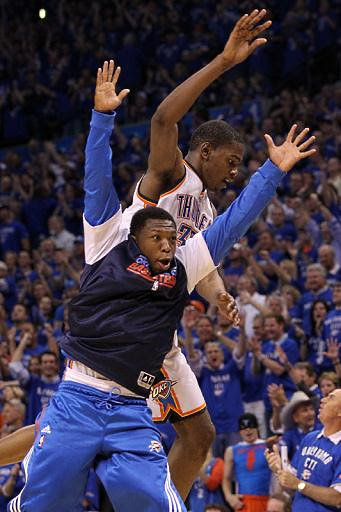 Nationally Televised Games:
Bulls at Heat, TNT, 8:30pm (Heat lead series 2-1): Can we please stop talking about Joakim Noah's anti-gay slur and subsequent fine? His new-found complete and total inability to put a basketball through a hoop is far more interesting, considering he is, after all, a professional basketball player.

kazam92 said...
I kind of hate the media is already anointing the Heat as "oh they proved us wrong. They can win." They're up 2-1 against the Bulls. And Dallas looks amazing assuming Miami does beat Chicago.
5/24/2011 4:53 PM

Batmanu said...
Why even play the rest of the conference finals? It's already set up for the DAL/MIA rematch, where Kidd finally gets a ring and LeBitch cries all summer about needing more help. It'll start by Miami going up 2-0...

Mr. Satan said...
Batmanu: I think Dallas would get homecourt advantage considering the fact that they beat the Heat twice in the regular season.
5/24/2011 6:35 PM

Eddie said...
The Heat would have homecourt advantage. Whichever team comes out of the east will have homecourt.
5/24/2011 7:23 PM

Anonymous said...
Nominee for unintentional dirty quote early in the broadcast talking about getting ready for the season following a discussion of LeBron's off-season workouts...

No DVR, so this isn't exactly quoted.

stephanie g said...
I know I'm late but in game 3 LeBron had an epic travel. They even showed the replay instead of pretending it never happened. The overhead shot was glorious. Four full steps for the King.
5/24/2011 7:51 PM

TransINSANO said...
@Kazam92: Whatever happens, wasn't everybody kind of right about the Heat this season? They had all the struggles naysayers predicted and more, they "figured it out"/became a real team blah blah blah, and ultimately maybe just nobody can beat three talents like that playing together however flawed they might otherwise be.

I think Steve Kerr summed it up well the other night, and totally depressed me: while Thibs is always having to make these offense/defense judgment calls to keep his team in the game, all the Heat's best players are their best at both ends of the floor. Maybe it's that simple.

Anonymous said...
LeBron got away with another huge travel to put the Heat up four during overtime. I really hope Dallas whoops that ass.
5/24/2011 10:33 PM

ChrisLTD said...
Here's hoping Miami loses the killer instinct after they win the championship this year. Watching LeBron James win playoff games is making me physically ill, so I may have to quit following the NBA if Miami builds a dynasty.
5/24/2011 10:40 PM

kazam92 said...
Haven't screamed that much in a whiiiile watching basketball. LeBron's defense now compared to year 3 and before is just mind boggling.
5/24/2011 10:41 PM

TransINSANO said...
Alas, seems it wasn't meant to be...

Still, going to be watching Game 5 closely, hoping the Bulls have a little magic left to send it back to Miami and at least allow a Game 7 to loom.

Mike Brown in serious talks with the Lakers. Oh my God please let this happen.

Sadly, considering some of the other names being floated this actually isn't the worst case scenario. At least he's teams had strong D, and lord knows Kobe would love to play in Brown's patented LeBroffense. Oh God.
5/24/2011 11:37 PM

stephanie g said...
The offense in the ECF is so bawful. I've seen high school girl teams with better sets. And it's not defense either. There's a difference between good defense and bad offense. Rose has been playing like garbage for most of the playoffs, shooting 40% with like 4 TOs a game, even against scrub teams like the Pacers and Hawks. He's not equipped to run a team because he's not a natural passer. And maybe it's a coaching problem too. Noah-Rose pick and roll makes no sense. Where's the Boozer-Rose pick and roll or pop? That's what him and Deron did all the time in Utah if their motion offense was failing. I know Rose isn't that good of a play maker, but still. Korver is getting outplayed by a handless Mike Miller. Deng is gonna facepalm the Bulls out of this playoffs. I swear everytime he dribbles something catastrophic happens.

Not like the Heat are much better either. Everytime LeBron catches the ball in the triple threat the Heat are in danger of a shot clock violation. I know this has been true all year but it keeps happening. And his athleticism has regressed like crazy, getting blocked by the rim and being unable to finish layups with any sort of lift. What's he gonna look like in a couple years? It's a good thing he's been working on his whack jumper.

Wade is quietly having one of the worst series of his career. He played great d and hustled and everything, but someone stole his ability to score and dribble.
5/24/2011 11:42 PM

snafu said...
I'm not a fan of either team, but holy crap that was an entertaining basketball game to watch. The intensity and athleticism on the floor was mind-boggling. And at this point I'm sort of rooting for LeBron because of how much it will annoy people if the Heat win.
5/25/2011 12:11 AM

Nightdreamer said...
This is Lebron's travel journal from tonight: http://www.youtube.com/watch?v=E5UrzaOFAJU

Other travel tales from Chi-Mia series:

Jason D said...
So Mike Brown is unofficially the head coach for the Lakers. I really don't know how to feel about this. On the one hand he's a good defensive coach but on the other he's below average offensively. But he did have to give into LeBron. But LA has Kobe...

I think I'm trying to find any valid reason for this. Was Rick Adelman not willing to commit or something? Coming from a Lakers fan's perspective, I don't know how to feel.

The first thing I think of when someone says Mike Brown is this:

Anonymous said...
I don't think I can keep watching the NBA if the cHeat win a championship this year, it would be too much. And it would just be the start of an era that I don't want to be a part of. I hate them, it is irrational and it is only sports but I can't feel any other way. I really fear it's gonna happen, the NBA won't pass up the opportunity to have their golden boys on the throne.
5/25/2011 3:19 AM

Ragib said...
"Give Dirk his props. Dude is awesome."

I thought a whole huge theme on this blog is to never give props ever to great players doing great things because this is a blog where based on basketball fail.

I'm not saying we should never give great players their props when it's earned, I'm just bringing this up because you never hear a line like that on this website when LeBron has a killer game. This blog is completely anti-heat and anti laker, which would be fine for a basketball fail blog if it wasn't also Chicago and Celtics homers. I like this blog but as a Heat fan, a huge downside to my visits here is this point.
5/25/2011 5:07 AM

andres said...
D Rose was so bawful so so bawful i guess the marketing department in the league failed when they choose to give Rose the MVP award
5/25/2011 8:46 AM


Also, I'm reading the money issue was solved, and the announcement is coming later today. Mike Brown, new head coach of the Los Angeles Lakers. This is the greatest moment of my basketball watching life (not involving a team I root for).
5/25/2011 9:08 AM

Wouter said...
If it's Miami - Dallas, the Mavs have no chance. Boston & Chicago are well equipped to keep up with the Heat (and still failing miserably). Dallas has Marion who, make no mistake about it, is a good defender. Other than that their frontcourt defense consists of Crazy Pills II, Eugene Terry and I guess you could include Kidd who by no means can stay with Wade for 30 mins a game. 2 or 3 posessions, sure, but not a whole game. Plus Dallas just doesn't have the intensity or the schemes on D to keep those guys out of the paint. I see Haywood and Chandler averaging 5 fouls a game. Should be a good series, but it's Miami's title to lose. Even with Lebron's "regressed athleticism". (I mean seriously... WTF? Do you even watch these guys play?)
5/25/2011 9:22 AM

kazam92 said...
Lighten up Ragib. I've been reading and posting here for 2 years as a heat fan and I enjoy this, even if some of the comments are irrationally bitter. Most of these guys are intelligent basketball heads

To stephanie's point, yes Wade isn't the same on offense. Makes me wonder if he expended too much on offense, but lo and behold the city on Miami shit their collective pants when Mike Miller, Mike freaking Miller, starting doing what he was paid to about 95 games past due
5/25/2011 10:05 AM

Karc said...
Looks like the move to get Mike Brown to the Lakers was Jim Buss' plan. Yeah, the new "Big Baby" of the NBA. The same guy who hired Rudy T after the awesome fail against the Pistons.

Heh, as some have already alluded to, I really want this to happen. Jeanie Buss runs basketball better than this tool, because she had the smarts to sleep with the coach with 11 rings. Lakers could not score with Phil Jackson. What makes them think they can score with Mike Brown? San Antonio and Cleveland must be going "well, that's a stupid hire."

Nightdreamer said...
This just keeps getting better and better. Kobe was reported to be surprised by the news of Mike Brown being taken into consideration for head coach:

So if Mike does end up getting the job, wouldn't he be playing the same script that he had as Lebron's coach, in which his purpose is to find strategy to revolve around Lebron's play style (or ego), and despite that he ended up unappreciated by the very superstar he's trying to please? Except with Kobe it would take even shorter for the player-coach fallout to commence?
5/25/2011 11:24 AM

TransINSANO said...
So far nobody's mentioned the most damning reason behind this "surprising" hire. The Lakers don't want to spend big money on a coach any more, yet they're still going to hire Mike Brown for around 4-5 mil for four years. I mean, Hell, what's Larry Brown doing these days? Give him a short term contract with an out every year and see what he could do with this roster next season. It's basically championship or bust year to year from now on anyway.
5/25/2011 12:24 PM
Post a Comment
<< Home
Subscribe
RSS Feed
Mailing List