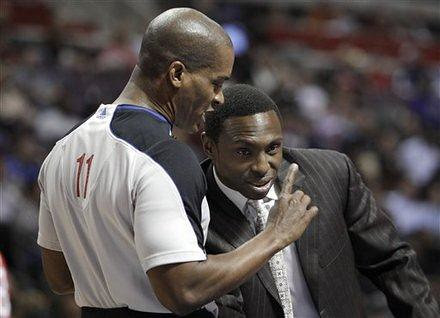 "YOU'LL HAVE TO SPEAK UP. I'VE YELLED SO MUCH I'M HALF-DEAF."
Short post tonight, kinda pressed for time. So in the meantime, you absolutely, definitely must watch this video from The Basketball Jones. It includes David Stern jacked up on 4Loko and angel dust. What else do I need to say to pique your interest?


Worst of the Night in Pictures: 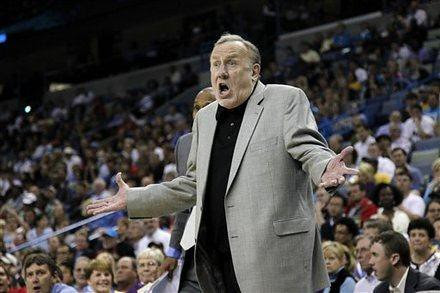 "Coach, why do you wear gray jackets with black shirts every damn night?" 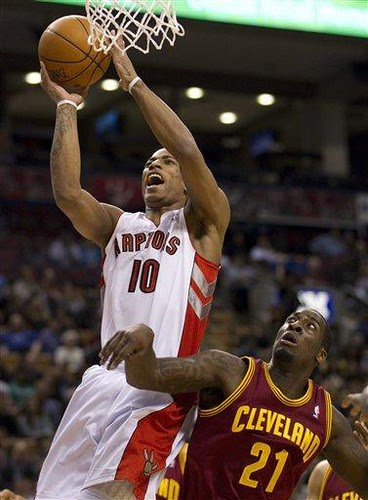 Calm down, Hickson. It's just a layup. 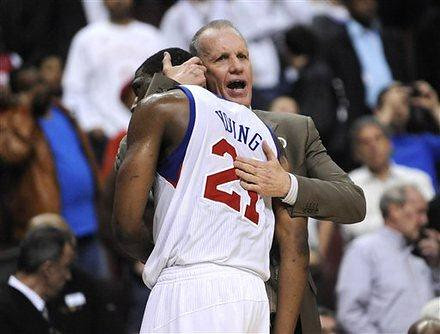 "It's okay, Thaddeus. Those mean ol' bullies are just jealous of your awesome name"
Nationally Televised Games:
Celtics at Bulls, TNT, 8pm: Do yourself a favor and go read through Hardwood Paroxysm's Twitter feed. He spent most of the early afternoon trying to get Bulls and Celtics fans to trade barbs. Highly entertaining. I even briefly got in on the action with an Antoine Walker reference. Sadly, the 140 character limit prevented me from tacking on a joke about how the Celtics would have dominated if the NBA added a four-point shot line.

Anonymous said...
So Utah gets Devin Harris back, and the Jazz promptly lose? I'm sure that's just coincidence. hahaha

Harris is going to eternally wear the no-playoffs curse around his neck like Jacob Marley forever wears those chains. Search your heart, you know it's true.
4/08/2011 12:11 AM

The Sports Hayes said...
That was the most decisive beating the Celtics have taken since Phoenix before the Perkins trade.

The Celtics had no excuses last night. Sure they were missing Shaq but they've missed him for half the year and they still were emphatically demolished by Rose.

Wild Yams was right, Ainge torpedoed the team and the ship is finally sinking. Without Perkins the C's interior defense is nonexistant and with Krstic publicly doubting his abilities...the C's are effectively screwed on the inside.

Hold your horses, partner. It was only one game, and the Bulls were at home, and Rose shot lights out, while Allen and Rondo couldn't buy a bucket.

I agree it was an ass-whuppin, but I'm not quite ready to pronounce the C's dead yet. And anyway their problem wasn't with interior D so much as letting Rose get to the cup and the line (he shot an unusually-for-him high 10 free throws and was a one-man layup drill last night.) Rondo needs to play him a little smarter and keep him in front. Like Kobe, you WANT Rose to take jumpers and keep him out of the lane.

Anyway I think what we saw last night were two pretty evenly matched teams; one of which was playing at home and hitting shots, the other of which was on the road and not hitting shots. (Boston hit under 40% of their shots and only 2-10 from 3. So... yeah. They hit a few more shots it's a different game).
4/08/2011 9:15 AM

Anonymous said...
I think it's fairly clear by now that the main loss suffered by the Celtics in the Perkins trade was chemistry. And not the Barry Bonds kind.

If we get Boston-Chicago at any stage of the playoffs, it could be another explosive series, with or without Shaq. But more likely without.
4/08/2011 11:17 AM

While I agree that it was only one game, this game wasn't atypical of Chicago Bulls basketball (anyone remember that game against the Hawks?). The Bulls have been playing great D for most of the season, especially when healthy. The Bulls have held teams from behind the arch to 32% on the season, and since December, Derrick has averaged 7.9, 7.1, 8, and 10.3 attempts per game a month from the line. This wasn't a fluke.
4/08/2011 11:36 AM
Post a Comment
<< Home
Subscribe
RSS Feed
Mailing List