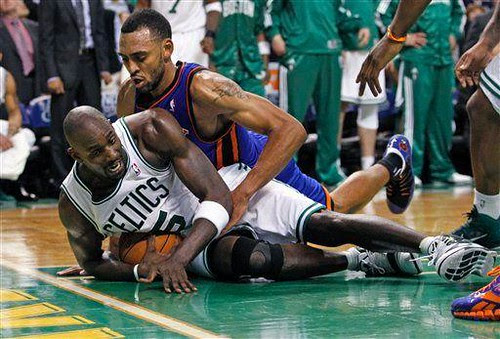 Epic playoff man-love
(via Basketbawful reader Sturla)
If you only read one thing today (aside from this blog, natch) you ought to make it this piece on the awesomeness of Kendrick Perkins. This story recaps how Perk practically adopted a couple guys who were just fans of his and started a goofy website about it, and it turns out Perk sounds like somebody you'd love to hang out with. (Of course, this also makes the Perk trade even more painful for Boston fans, but it's still worth the read.) Also, it talks about playing NBA 2K with Real Life Ricky Davis dancing every time Virtual Ricky Davis scores a basket. If that doesn't make you want to read this story, nothing will. 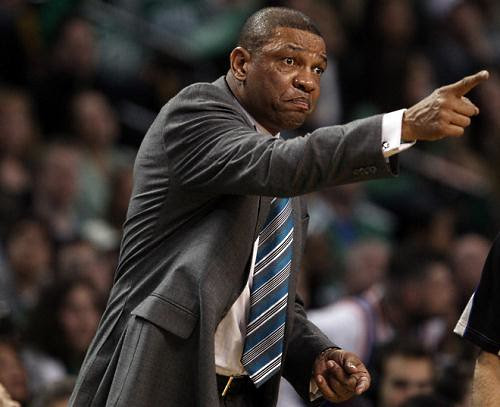 Caption This!
What's going on with Doc Rivers? 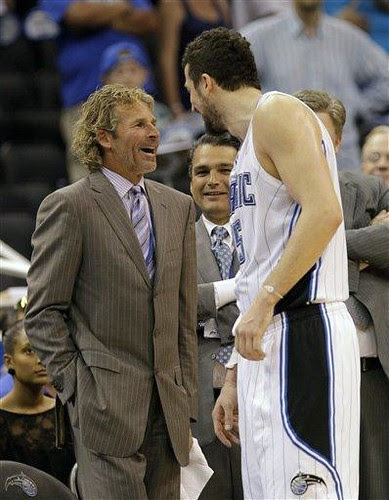 "Hedo!"
"Orlando Magic CEO Bob Vender Weide! Haha! You're one of the only people who understands me!"
"Ball." Stan Van Gundy smiling? No! That can't be! Who is this doppelganger and what has he done with the real SVG??? 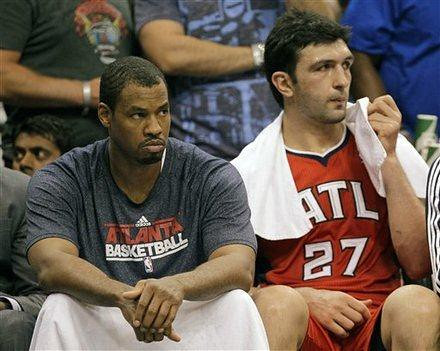 Sad Hawks Bench! Or perhaps in the case of Jason Collins, Anger That Burns with the Intensity of a Thousand Suns Hawks Bench 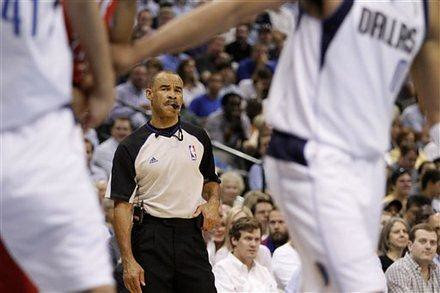 Nationally Televised Games:
Nuggets at Thunder, TNT, 8pm (Thunder lead series 1-0): Durant and Westbrook scored bucket after bucket in Game 1, even if Denver was playing relatively good defense and getting hands in faces. Sometimes the shots just fall anyway. That was George Karl's reasoning when addressing the media wondering if they needed to change their defensive strategy. "You want to overreact to that? You want to go off and double-team and give up open jump shots? I'm not there yet." OF COURSE they want to overreact. They're the media! That's what they do!

Grizzlies at Spurs, NBA TV, 8:30pm (Grizzlies lead series 1-0): You just know the Spurs are pissed about letting the Care Bears get their first ever playoff victory. Could we see an almighty revenge game? I can already feel the piercing stare Tim Duncan's going to use all night.

Hornets at Lakers, TNT, 10:30pm (Hornets lead series 1-0): According to this person on Twitter, Chris Paul's PER in Game 1 was 45.0. Forty five point zero! After extensive research (AKA one Google search that lasted two minutes), this is one of the highest individual game PERs in modern NBA playoff history. Also, according to Hollinger's Game Score metric, CP3's game was rated a 37.5, a number which he eclipsed only once during the entire regular season (and he only broke 30 three times during the regular season). It was the 48th highest Game Score rating in NBA Playoff history dating back to the '86 playoffs. So, uh, I hope Chris Paul's teammates weren't banking on him putting up three more nights like that in this series.

Basketbawful said...
I love watching Kendrick Perkins try to post up. It's so cute when his team let's him pretend to have an offensive game.
4/20/2011 8:48 PM

Karc said...
Bynum, Odom, and Artest saved the Lakers tonight. If the headline is tying up a first round series against a team that you swept in the regular season with your two "best" players going 5-20, um yeah, you're toast.

Pinto Raine said...
“There was a point in the first half, and I was thinking 'You better not cry,''' Roy said.