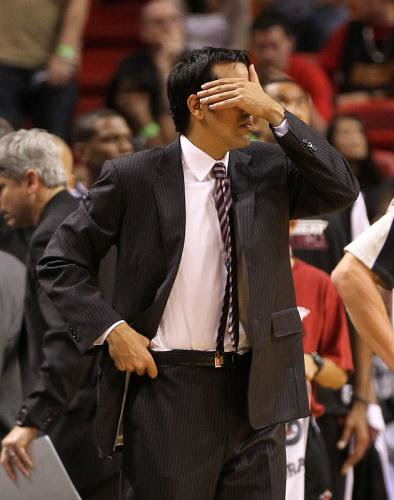 Apparently Erik Spoelstra knows where this BAD post is about to go...
With everybody having a take on the Heat right now thanks to their losing streak, I've got a metric shit-ton of links to pass along, so let's just get them out of the way in one spot (tip of the hat to Chris for a lot of these):

ESPN ponders: what would happen if LeBron James became a professional bowler? (For the record, I've seen LeBron bowl in Chris Paul's PBA Celebrity Invitational. I don't think we need to worry about him going pro any time soon.)

The URL on this one says it all: http://www.didtheheatcrylastnight.com/

The wonderful Joe Posnanski describes the joy of rooting against LeBron.

Over at The Basketball Jones, they wondered what would happen if the Miami Heat were featured on Growing Pains.

Darren Rovell brings us the latest on that bar that guaranteed free drinks after every Heat loss. They've lost $85,000 on this promotion now. 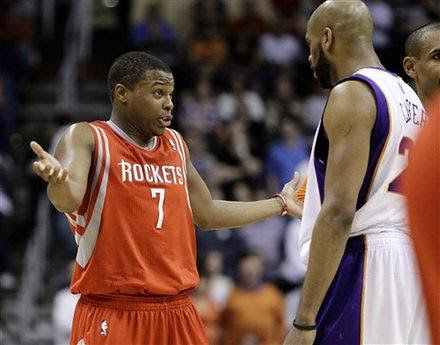 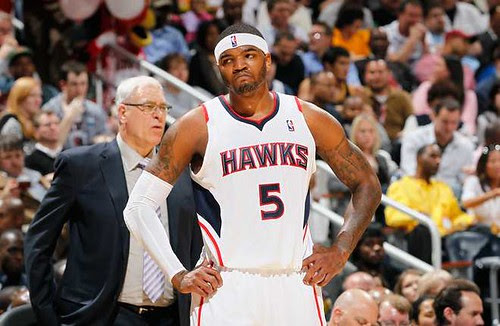 Josh Smith is. Not. Happy. A mid-air embrace? Wow. They're really happy to see each other 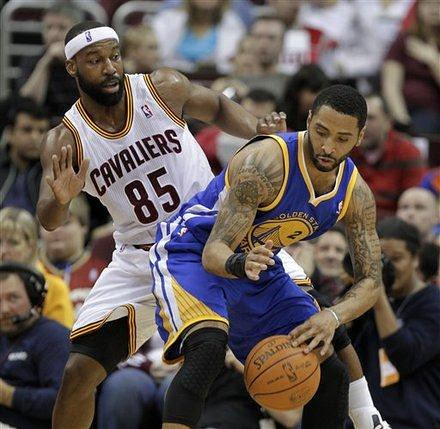 Why does Baron Davis always look surprised? Has he never seen anyone dribble a basketball before? 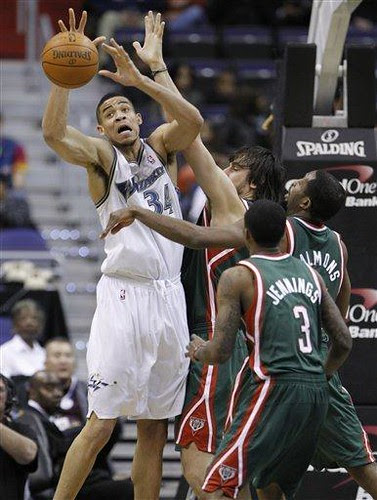 Javale McGee is just a bit excited to grab that basketball

Nationally Televised Games:
Knicks at Grizzlies, NBA TV, 8pm: Anyone else still having trouble accepting just how legitimately decent the Grizzlies are? You know, beyond the Z-Bo part even.

All The Other Games:
Warriors at Nyets, 7pm: Deron Williams is out for this game. Ruh roh. Could we see the Warriors get back-to-back road wins for only the second time this season?

Thunder at 76ers, 7pm: Something to ponder: if not for starting the year 3-13, the Sixers could have been fighting for home-court advantage in the playoffs now instead of being a half game behind the Knicks for 6th in the East. Is a team headed up by Andre Iquodala and Elton Brand really that good?

Jazz at Craptors, 7pm: The Jazz have been unable to play anything resembling defense since Jerry Sloan left town, and they'll be playing with a short bench tonight (missing Paul Millsap, AK47, Francisco Elson, and Null-Stars Kyrylo Fesenko and Ronnie Price). Perhaps the dinosaurs' mascot will not feel the pain of planting his face on the court for one night!

Bulls at Bobcraps, 7pm: The Bobcraps are the only sub-.500 team to beat the Bulls more than once this season. How the hell did that happen? Did Jordan secretly suit up to play against his old team?

Clippers at Celtics, 7:30pm: Of note: all five of the Celtics' home losses have come against Western conference opponents. Also of note: the Clippers are the Clippers. Do with this information what you will.

Mavericks at Hornets, 8pm: And the playoff hopes in New Orleans get smaller and smaller every day Chris Paul is out.

Cadavers at Bucks, 8pm: How bad is Milwaukee's offense? Let's put it this way: the Cadavers had one of the most amazing losing streaks in professional sporting history earlier this year, and yet the very first thing that came to mind when reading this match? "Oh damnit, the Bucks and their boring lack of offensive ability!"

Pacers at Timberwolves, 8pm: Pretty sure that dead coach bounce has turned into a dead coach splat.

Pistons at Spurs, 8:30pm: FYI: Antonio McDyess predicts Tim Duncan will have "a big game against Detroit because he always feels like he let the team down, not only himself." This could be fun.

Magic at Kings, 10pm: Just a reminder: the Magic managed to lose at home to the Purple Paupers just two weeks ago. Revenge game? Or just more turnovers and dumb mistakes?

“Once the games start, it’s gonna be easy,” said LeBron James on July 9, when he, Wade and Chris Bosh were feted like professional wrestlers at American Airlines Arena. LeBron also spoke of championships, saying, they intended to win “not one, not two, not three, not four, not five, not six, not seven …”

In his defence, as pointed out by my pseudo-colleague Sean McIndoe, LeBron did not actually rule out zero. Canny.
3/09/2011 5:52 PM

The Nightbringer said...
I come home to see the Clips ahead of Boston at the half by 18.

They then go on to win the game...

Karc said...
Clippers have now beaten every division leader in the league. And despite losing at home to the Clips, the Celtics have clinched a playoff spot.

Purple Paupers lose at the Arco Ar...Power Balance Pavillion despite leading late against the Magic AND DeMarcus Cousins getting Pumaman to foul out.

So frustrating to see a good effort completely go to waste (and probably make the Maloofs gleefully snicker about the supposed millions in the Orange County pot of gold they THINK they will be receiving).

Franz said...
Kevin Love plays hurt and in under 30 minutes(I think 27)he records 21 rebounds. How is this even possible?

Oh right. The Pacers shot 29% from the field.

Anonymous said...
If I may comment on the Phil Jackson quote "perspective", that crying was during the playoffs, where there is a hell of a lot more at stake than say, a game in MARCH! Funny how THAT little detail was left out huh? Crying because your overhyped team lost a game in March =/= crying because you lost a playoff series after winning 3 championships the seasons before.
3/10/2011 10:35 AM
Post a Comment
<< Home
Subscribe
RSS Feed
Mailing List