Sorry I've been a complete lazy-ass about these fantasy updates. And by 'these' I mean none at all. Things in personal life had been a-changin' and all that. The season was long, and pretty much active throughout, so I daresay it's been one of the best online leagues I've been in.

Just as a reminder, here were the original draft results, including our 11-cat scoring system with PFs and TECHs. Again, the season was awesome and it came down the the wire; down to the final categories on the final week. Let's get to the results. 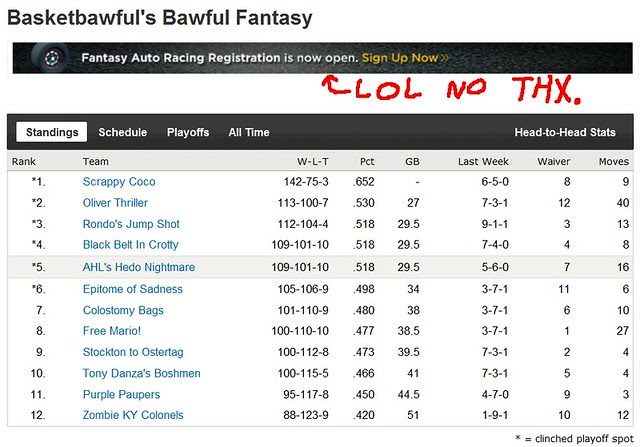 As predicted, Scrappy Coco and his mega team just dominated us in the regular season, Mavericks-style. What didn't go as planned was chris's team going from a predicted 2nd best to 2nd worst. All and all, the transactions throughout made the difference.

***WARNING: This is the section where I blabber on about my team***
At some point in the season, I had 5 simultaneous injured (and essentially non-droppable) players, and even picked up my team's namesake as predetermined by destiny, Hedo. In early December I was running a roster of Hedo, Fat Baron (before he realized Blake could save his career), Darko, Blatche, Bargs, Mayo (pre-stupid), and Salmons. Exchange a dropped Mayo for a non-rebounding Brook Lopez, a Sloan-killing Deron Williams, and Brandon Roy's tendons, my current team heading into the playoffs is a true Basketbawful masterpiece. Also as you can see, I was the ties master, with 7 of them in TECHs.
***END OF SELF FELATE SECTION***

Speaking of TECHs, that was by far the greatest addition made to this league. It really made the difference some weeks, and it was hilarious to see them happen. Of course the crazy trades shook things up too, and my plan to maximize quality games through the playoffs came to a crash.

Last note, it seemed like there were a ton more injuries this year than any other year. Pretty much every top team is dealing with some current injury issue, and the total GP of the top players has to be lower than recent years.

With that, to the playoffs we go. I invite any of our participants to share their thoughts, experiences, smack-talk, or maybe conjure ideas for a league prize. I offer my Suns Marion jersey to the winner, probably with large portions of my feces smeared on it. And hey, how did the Bawful rejects league turn out? I might just run two of these next year (with better draft planning and invites).

stephanie g said...
RE: The idea that no one saw Denver not nosediving after trading Melo and Billups:

Dan B. said...
It's amazing how bawful my Zombie Kentucky Colonels were.

Evan said...
AnacondaHL, it was fun being tied in techs with you. Have fun in the championship round while I'm in the pity consolation one!
3/15/2011 5:39 PM

Unknown said...
What the...
http://www.wikihow.com/Be-a-College-Basketball-Fan

It's too early for April Fools'. There's no way I'm following 32,000 college teams, half of them named "Wildcats" and from places I've never heard of, in spastic unrefined play while Dick Vitale broadcasts with terminal laryngitis.
3/15/2011 5:49 PM

Dan B. said...
At one point in the season I had 4 Bucks on my roster. I have no words for this.

And yet I finished lower than you. I feel turrible. Then again, at one point I had Corey Maggette, John Salmons, JR Smith, Hedo while he was in Phoenix, Boris Diaw, and Darko before his offensive outburst. (Yeah, I couldn't make it to the draft, and I got fuuuuuuuuuuuucked as a result.)
3/15/2011 10:11 PM

TeamD said...
Watching the draft Chris got with his first picks the delusions of the season, kidd, paul, collison, the other gasol, anthony randlph LOL

and he was predicted to get the 2nd seed :D

Business Time said...
@Shrugz, I envision something like this: