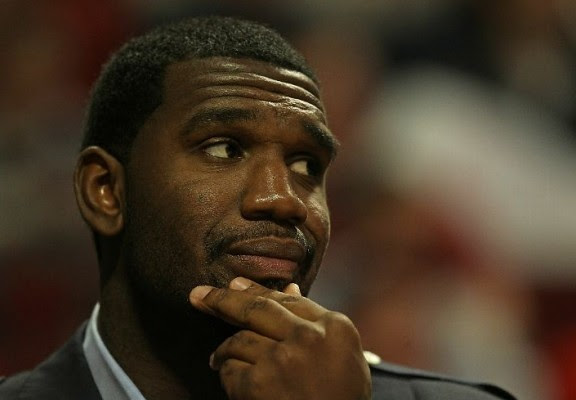 "If I sit here quietly without moving, maybe nothing will break for a change..."
The Portland Trail Blazers: Let's take a quick peek at Portland's Defensive Fail checklist:

Point 3: Give up 48 points in the paint to a team with no inside scoring threats (Carlos Boozer is still out with a busted claw).

Point 3: Allow a perennial underachiever (Luol Deng) to set a new career-high in scoring (40 points) while shooting at a blistering rate (14-for-19 from the field, 3-for-5 from downtown, 9-for-11 from the line). 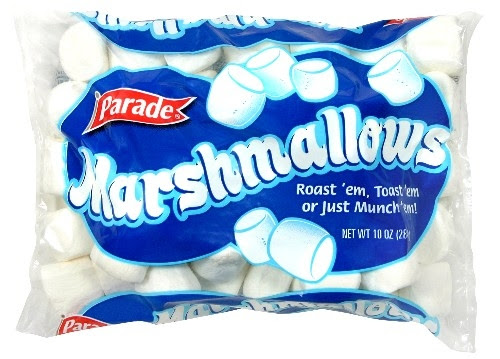 Portland's defense: Roast 'em, toast 'em, or just munch 'em!
By the way, this loss shouldn't have come as much of a surprise. Not to anybody paying attention anyway. Sure, the Frail Blazers entered the game 3-0, but two of those wins were against the Clippers and Knicks, and New York was playing on the second night of back-to-backs after a close loss in Boston the night before. And Portland had to come from behind in all three wins.

Portland's three-point shooting: This deserves its own entry: The Blazers entered the game ranked first in three-point percentage (45%) and then went 0-for-14 from beyond the arc. Memo to the Portland shooters: You're supposed to aim at the rim, guys. The rim.

Update! "We're not gonna go 82-0" Watch: From Basketbawful reader Andrei: "Good thing the Blazers lost, otherwise they might have gone 82-0 and never gotten any better." The quote:

"I think it's kind of good to get that whole 3-0 thing out of the way," Roy said. "Now we won't be playing to that, instead of playing to get better. We can put that behind us: The season has started now."

Neil Funk, unintentional dirty quote machine: From Basketbawful reader Mike G: "And Rose with some thrust!" I could actually assemble an entire archive of dirty quotes for all the times Funk and Stacey King thrill to Rose's penetration.

The Toronto Raptors: Even though they were playing in their home opener, the Purple Paupers fell behind 33-16 in the first 12 minutes. During the third quarter, they were still down 16 and Tyreke Evans was in the locker room with a timid vagina tummy ache.

However, the Kings were playing the Craptors. And against the Craptors, no deficit is ever safe. Sure enough, Evans made his Willis Reed-like return and the Sactowners came back for a win that lifted their record to 3-1.

Historical note: It's the first time the Kings have opened the season winning three of their first four games since 2003-04.

Reality check: The Sactowners have been down by double-digits in all three of their wins. And their first four opponents have been the Timberwolves, Nyets, Cavaliers and Craptors. And they lost to the Nyets. Their next game? Against the Lakers.

Sorry to be a wet blanket and all. I'm just sayin'.


Sacramento's first half defense: During the first two quarters, the Craptors shot 58 percent and scored 62 percent. Have you seen their roster? That shouldn't happen unless the opposing team has been swallowed by the earth.

Tyreke Evans, sick machine: "I drank a lot of fluids and felt a little sick, but I went out there and played." Uh, what kind of fluids were you drinking, Ty?

Paul Westphal, quote machine: "If I had my choice between the first and second half, I would take the second half."

The Los Angeles Clippers: Okay, yeah, technically speaking the Clippers lost another game and dropped to 0-4 on the season. But they lost their first three games by double digits (10, 18 and 16 points)...and last night they lost by only 9 points. And last season, the Spurs beat the Clippers by an average of 22 points in four games, and never by fewer than 16...

Or maybe not. According to the AP recap, the Clips lost 25 of their last 26 games against the Spurs, including the last 17 in a row.

By the way, Blake Griffin is finding out what so many Clippers before him already knew: No matter how well a young star may play for them, the Clippers are going to lose most of their games. That's just the way it is.

Craig Smith: Early in the second quarter, Smith undercut San Antonio's George Hill on a layup attempt, taking him down and injuring his right shoulder. Smith was hit with a flagrant 2 foul and ejected. Mind you, the whole sequence started when Hill intercepted a pass by Smith.

Said Tony Parker: "It was dirty. Just a dirty play. That was dangerous. There's no need to do that." Remember: Parker is French. He knows dirty.

Hill was too hurt to shoot his free throws, which made him ineligible for the rest of the game. And it sounds like Hill has some whiplash.

Said Spurs coach Gregg Popovich: "It's his [trapezius] muscle. It's not like his shoulder's out of joint or out of place, I don't think. He's just stiff and he can't turn his head or his neck. It could take a while, but it could be a whole lot worse."

Vinny Del Negro, boring quote machine: "I liked Eric Gordon's aggressiveness tonight. He has the ability to be aggressive as a point guard. Eric Bledsoe worked hard and made some steals."

Baron Davis: Missed the game due to a sore left knee. Well, that didn't take long. 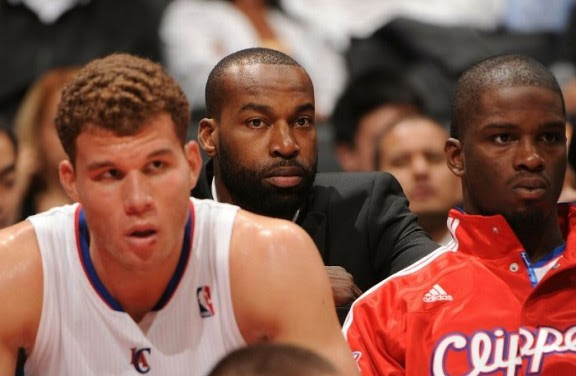 Sad trombone.
Worst Player of the Night: The Clippers bench. The Other L.A. Team's pine riders were outscored 32-7 by San Antonio's reserves. In fact, they were outscored 16-7 by Gary Neal. I know this may seem like a cop out, but when six players manage only 7 points on 3-for-13 shooting in a combined 56 minutes of lacktion...they're earning WPotN dishonors.

Lacktion Report: Chris somehow overcame the dizzying joy of watching his Paupers get to 3-1 to deliver our daily dose of lacktion:

Frail Blazers-Bulls: Fabricio Oberto found himself back in lacktion tonight with a 4:1 Voskuhl in 10:20, countering a rebound with three fouls and a giveaway.

Raptors-Kings: Antoine Wright celebrated a close Purple Pauper victory with one brick in 2;46 for a +1 suck differential!

Spurs-Clippers: DeJuan Blair barely made it into the mark of mediocrity as starting big man, turning out 5 rebounds in 19:45 but also fouling four times and losing the rock thricely for a 7:5 Voskuhl.

For the Clippers, DeAndre Jordan was deflated in 14:40 by five fouls and two giveaways eating at two rebounds, leading to a 7:2 Voskuhl. Meanwhile, Craig Smith and his foul/giveaway pair in 1:20 earned a +2.

Halloween Bonus Picture: Because you demanded it -- okay, because Wild Yams demanded it -- here's a picture of the Spartan Warrior costume I put together for Halloween. It's hard (if not impossible) to tell from this picture, but that's real leather armor, a steel helmet with a real horse hair plume, and brass vambraces. And that's Evil Ted as the Larry Bird circa 1986. 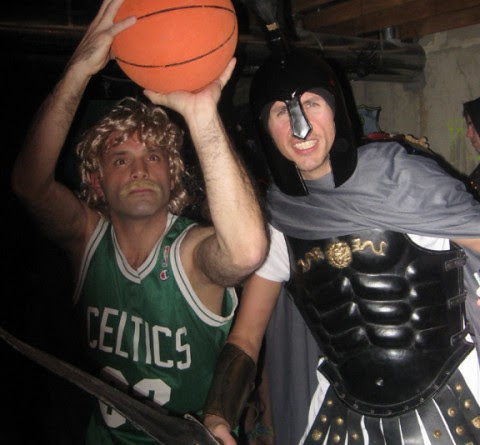 Heretic said...
When asked about his performance:

Dan B. said...
Bawful, as great as your costume is, I gotta give Evil Ted some props. That is an uncanny resemblance to Larry Bird. He needs to wear that in whatever video you have planned for the next Birdmas post.
11/02/2010 10:17 AM

Small sample size alert! Toronto was actually one of the teams this year on pace to break that arbitrary 96 DRtg on the year, prior to last night. Orlando, Dallas, and Miami have a chance to be grouped with a bunch of pre-3pt-line chuck it up teams, the shortened season Spurs, and the pre-handcheck Spurs/Pistons!

AnacondaHL said...
BTW, Greg Oden participated in Blazers practice, according to the feed on one of my fantasy teams. So now the watch on young players is on Blake Griffin's knees every time he lands, Greg Oden's feet every time he goes up for the block, and John Wall's mental health as the season progresses. NBA!
11/02/2010 10:43 AM

The Other Chris said...
@AnacondaHL I'm reposting my superbly witty comment from the After Dark thread because, basically, it's another chance to bash Hedo, and who could pass that up?

Still avoiding looking at the number of guaranteed years remaining on Hedo's contract.

Phoenix, I can't thank you enough for taking our garbage. Really swell. You made our favourite son a two-time MVP, a superstar, the greatest Canadian NBA player of all time, and now this. You guys just love Canada, eh?

Unknown said...
So, we can now take four steps instead of two, Reke. I'm waiting for the days when all dribbling will be eliminated from basketball and it turns into a weird variation of football or rugby.
11/02/2010 10:56 AM

Anonymous said...
A dangerous and overly physical play with the intent of injuring a player...against the Spurs?
Could it be this 'Karma' thing I've been hearing about?
11/02/2010 11:04 AM

Basketbawful said...
Bawful, as great as your costume is, I gotta give Evil Ted some props. That is an uncanny resemblance to Larry Bird. He needs to wear that in whatever video you have planned for the next Birdmas post.

chris said...
So Evil Ted as Larry Legend...is he going to don a suit and pretend to be Pacers Coach at some point?

Sorbo: This means that Tyreke The Freak is becoming a CERTIFIED SUPERSTAR!

The Other Chris said...
After reading that twitter feed for a while, I hopped over to ESPN. Their article on the signing contains the magnificent, amazing, possibly most hilarious sentence ever:

"The Grizzlies' decision to lock up Conley as their point guard of the future was sparked by his excellent play in the preseason and over the regular season's first three games."

E.J. 'Trey' Alverson said...
Big Al also got a contract extension last night, which is a good move for the Squawks...

I really didn't think that Al would get paid, especially after we matched Memphis' offer for Josh Smith, let J-Chill walk to Greece and terribly overpaid JJ... but suddenly, to my surprise, we have JJ, Al and Smoove locked up long term. We might not be competing for a title, but this sure beats the hell out of our prospects in the early 2000's.

While we're on the Hawks, anyone catch Etan Thomas' "25 QUESTIONS" blog over on Hoopshype? There's some good stuff in there.

Mr. Bawful - Another incredible costume effort, well done. Care to share any details on how you put this one together? After spending months building your own proton pack last year, I'm imagining you either doing the leatherwork or blacksmithery yourself.

Wormboy said...
Matt, I love you as much as possible without being a Village People fan, but you are seriously One Obsessed Dude. OOD.