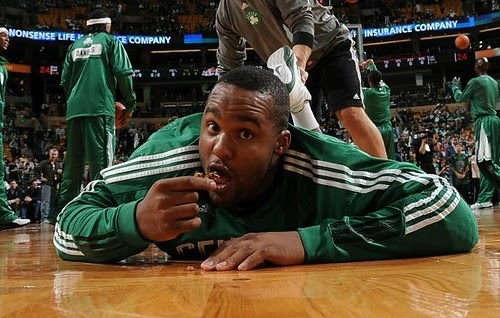 Doesn't get much more bawful than this, folks
There is one thing that I absolutely, positively must share with you today. Bawful e-mailed me a video that has recently gone viral, even though it actually was apparently from a couple years ago. I don't care when it was filmed -- it is still friggin' awesome and required viewing for anybody who reads this blog. (Note: technically not really required viewing. We won't somehow ban you from reading our blog or something. We may, however, force you to watch an endless loop of the terrible Sixers-Cavaliers game that BadDave so awesomely described earlier today)

This guy is livin' on a prayer, and perhaps large quantities of illegal drugs
Hard to top that, but we'll press onward. To pretty much nobody's surprise, Wade Phillips has been fired after the Dallas Cowboys spent the first half of the NFL season defining "footbawful." The best part of it? Wade Phillips didn't get the news until long after it had already been posted on Twitter. I can absolutely envision a befuddled Wade Phillips staring awkwardly at his computer screen for twenty minutes before Jerry Jones called him to reiterate the point. You know, kind of like this. (Thank you Deadspin for posting this and saving me the trouble of hitting up Google Image Search as I had initially planned when I began writing this section!) 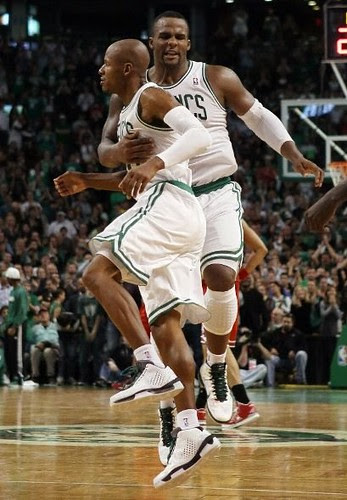 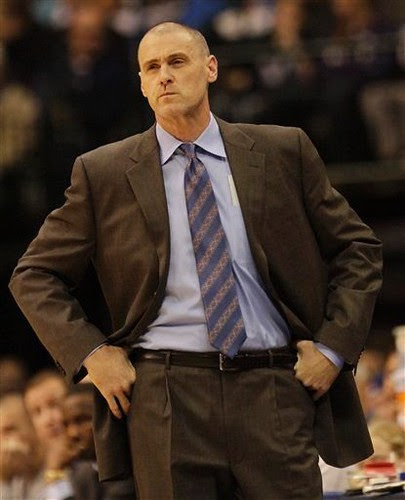 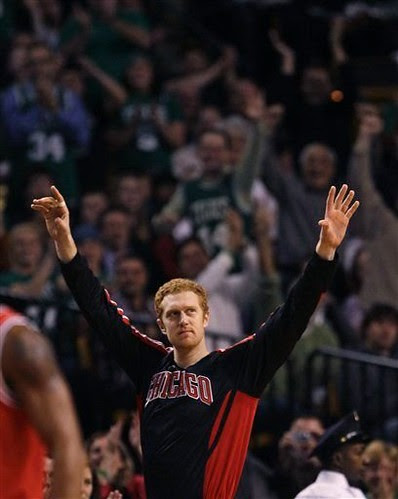 Scalabrine FTW! Why did Boston ever trade him again??? 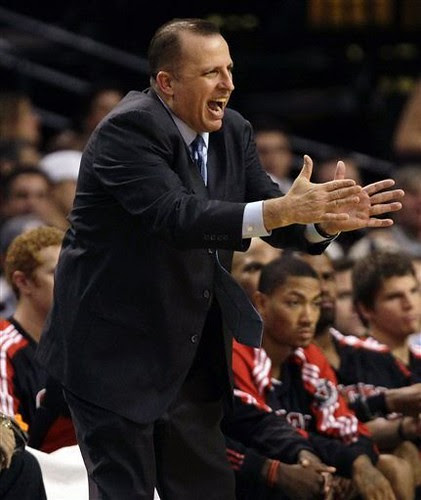 Okay, Subway's subliminal advertising is getting out of hand 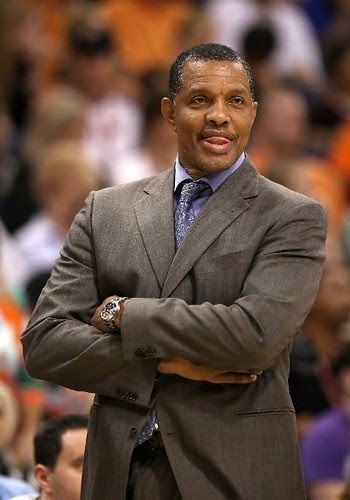 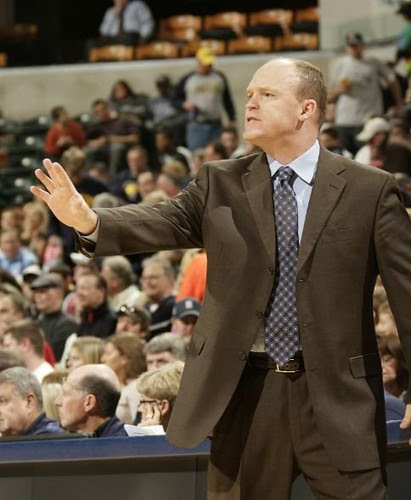 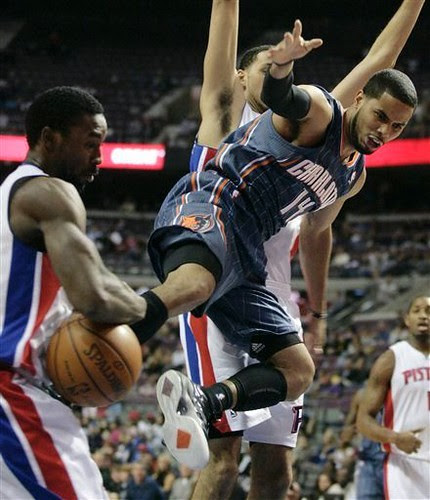 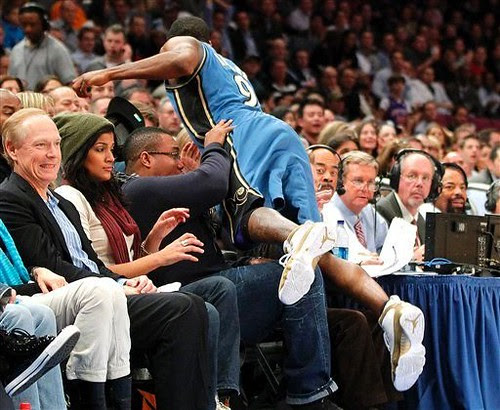 "I told the vendor I wanted peanuts, not Arenas' nuts!"

Nationally Televised Games:
Warriors at Craptors, NBA TV, 7pm: Funny how Don Nelson leaves, and suddenly the Warriors becomes infinitely less sucky. Well, actually I guess it's not so much funny as it is predictable. Meanwhile, why in the hell is this game on NBA TV? Who is watching this game, honestly? People who have lost their remote controls and don't want to stand up to turn off the television?

All The Other Games:
Hawks at Magic, 7pm: If the Hawks by some minor miracle manage to beat the superior Magic, it would be nice revenge for last season's playoff exit, but it would also be the first time the Hawks opened a season 5-0 on the road since 1967. You know, when they were based in St. Louis. That's pretty amazing. Good thing we don't have to dwell on that much longer since the Magic will probably roll over them.

Spurs at Bobcats, 7pm: In the dozen games that the Bobcats have played against the Spurs, they have averaged 82 points per game. Eighty two. I think it's safe to say the Spurs own the Bobcats. They probably have a sweet certificate of ownership and everything.

Nuggets at Bulls, 8pm: The Nuggets have been forced to play some serious small ball lately thanks to injuries, and they've responded with two straight victories. That being said, don't get too excited. One of those wins was against the Clippers, and the other was an abberration game where they hit 13 of 21 treys, kinda like the Knicks did to the Bulls the other night. So guess who they get to play now? The Bulls! I'm sure this will end well.

By the way Bulls fans, I have good news: A Brian Scalabrine statue is not in the works.

Suns at Grizzlies, 8pm: This is the second time in four days that the Care Bears get a dose of the Phoenix Suns, and that last game went to double OT. How do you top that? We better see at least triple overtime, and at least one interview where Turkoglu merely utters "Ball." (In reality, Suns are on the second night of a back to back and on the road, complete with Turkoglu becoming Turkododo as always. This does not bode well, friends.)

Celtics at Mavericks, 8:30pm: I'd just like to point out that Rajon Rondo's averaging nearly 15 assists and 3 steals per game at this point to go with his 11ppg. Damn. That is all.

AK Dave said...
In defense of Brian Scalibrine (what?):

The other day he really did a nice job defensively on Glen Davis and Paul Pierce.

For instance: on the first possession after Scal entered the game, Doc went straight at him with Davis in the post. Scal forced him into a tough fadeaway that clanked- Bulls rebound.

Next possession: Paul Pierce Iso'd on Scal at about the right side free throw line extended. Scal switched his stance to force him to his left (and toward the middle), and as Pierce drove and spun to free up a shot, Scal was all over his shit, and kept his hand in Pierce's face on a tough fadeaway shot that clanked- Bulls rebound.

Look, I make fun of this guy a LOT, but if there is one thing he has going for him, he KNOWS that Celtic team backwards and forwards. He knows what kind of toothpaste KG uses. He can tell you how many dozen Hostess fruit pies Glen Davis eats on a daily basis. He knows whether Paul Pierce crumples or folds when he takes a SHIT.

Dan B. said...
AK Dave -- Scal not only knows the Celtics players, but beyond that, he already knows Tom Thibodeau's defensive system as well, making him a very useful bench player even playing against other teams. I'm still going to make fun of him, because he is an incredibly easy target, but yes, it's a sneaky good acquisition, especially if Chicago does meet up with Boston in the playoffs.
11/08/2010 6:12 PM

AnacondaHL said...
In another fantasy draft, I was drafting 7th and the guy before me took Dwight Howard. So on the way back around, I took Rajon Rondo just to spite him, despite already having a PG.

Sorbo said...
That video: That's just a natural reaction to the song. As a person who sings "Livin' on a Prayer" (on "g" necessary) at any Karaoke session, I know of its power. The amazing thing is that the entire Celtics crowd didn't get up and dance.
11/08/2010 7:43 PM

DKH said...
So I've previously noted my opinion that LeBron's "What Should I Do?" video and the Cleveland "response" don't reflect negatively on Cleveland. But apparently there was another video, released by some local comedian prior to the generally accepted "response" video. And he wants his recognition. More details at http://www.waitingfornextyear.com/?p=35985 .

I agree with the commenters there that this video is much dumber. At any rate, the video definitely deserves to be part of basketbawful history, I think.
11/08/2010 9:00 PM

kazam92 said...
Gill played with the Heat for a year I forgot about that. 01-02 was the year Zo came back the first time after he thought he cured his ailment. He made the all-star team that year but he wasn't himself. I find that funny he was so confident. I wonder if Hakeem, or Dikembe ever said something like that
11/09/2010 12:31 AM

Arouet said...
Apparently Zach Randolph on Sportscenter following the Griz victory tonight: "We just finished the whole game, we played the whole 42 minutes." Have fun with that.
11/09/2010 1:22 AM