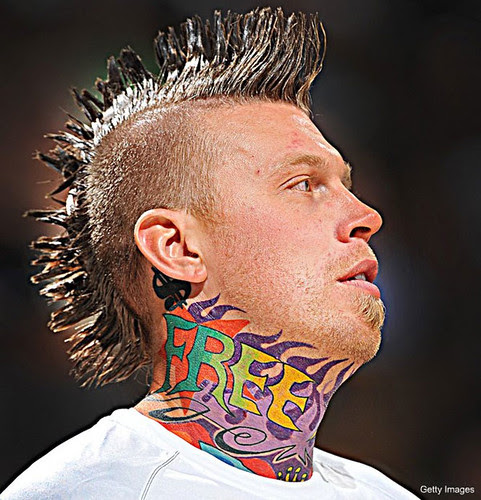 I can't stop staring...
Chris "Birdman" Andersen continues to amaze. Behold the latest alterations to his ever-growing collections of tattoos. When passing along the link, RT said "Looks like the Birdman wanted to pry the "League Award for Worst Tattoo in the above-shoulder category" away from Necklips." That's certainly possible. However, I have another theory.

The tattoo ink that now covers 97.543% of Birdman's body is actually the well-disguised form of a sentient alien being that has slowly poisoned his central nervous system and become one with his mind, kind of like a slightly less evil Venom. It is gradually turning Birdman into its slave, but it also has a great sense of ironic humor, as displayed in the "FREE BIRD" tattoo. Birdman merely thinks he is free. However, once the tattoo spreads and completely covers his whole damn head and face... I shudder to think what a completely tattoo-controlled Birdman Andersen is capable of. (Hint: it involves mediocre basketball)

As further proof of my revelation that Birdman's tattoos are Venom's little brother, consider this note from that Wikipedia entry: "The Symbiote, even without a host, has shown shapeshifting abilities like forming spikes and expanding its size." We finally have an explanation for Birdman's crazy ass spiky mohawk! It's all coming together!

RT also added: "Maybe in NBA 2K12 he'll just be a rainbow-colored polygon stuffed in an NBA jersey." Since the 2K series is so concerned with being realistic in every way... yes. This is exactly what will happen.

Wormboy said...
Yeah, my first gut reaction before reading your text was, "huh, Kenyon Martin's tattoos must have actually been contagious. Now I was speculating fungus, but your alien life form hypothesis is pretty good.
10/11/2010 3:56 PM

Unknown said...
Birdman's tattoos have more self-awareness than ESPN, which has just launched a fucking Miami Heat special coverage site. What a bunch of masturbators.
10/11/2010 10:29 PM

No Ring King said...
I think the finger mustache more than makes up for the neck: