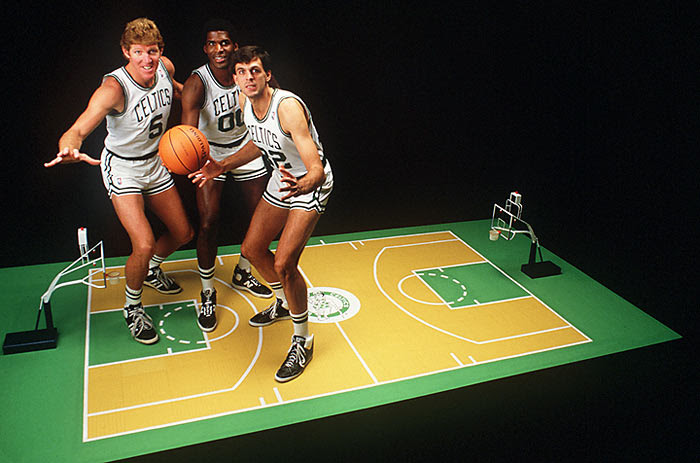 I can't believe I was alive when this picture was taken.

It's Friday! Since the powers that be at ABC decided to no longer celebrate this with Family Matters or Boy Meets World, I guess we're stuck watching basketball. Darn. Hopefully talking about it in the comments of this post will help you feel better about the lack of Urkel in your life.

(And tying this back to yesterday's BAD post, the last time the Jazz won in San Antonio before last night? Boy Meets World was still cranking out new episodes. Jesus.)

Since it's the weekend, we can't just use the standard Bawful After Dark title, right? Throwing this one out there since we didn't have time to deliberate and pick anything better. What do you guys think?
Anyhow, onto the previews!

Nationally televised games tonight:
Magic at Celtics - Expect the Celtics to slow it down and try to control the game with their defense. Well, you know, at least until Sheed just says "screw it" and starts jacking up bad three pointers. It's only a matter of time, people.

Nuggets at Clippers - It's always great when a team like the Nuggets go to LA to take on the Lakers -- wait, it's the Clippers? We have to watch the Clippers play on national television

Well, at least when this game is a 25 point blowout, we'll get to see someone trotted out as a human victory cigar.

All the other games:
Crabs at Pacers - LeBron effectively owns the Pacers (two triple-doubles and a 47 point performance in his past four games at Indiana). However, he's also banged up at the moment, because the rim apparently plays better defense than half of the teams in the NBA this year. So, hey, this game might actually be close! That doesn't mean it will be good per se, it just means it will be close. A basketball game between two teams of midgets that have been drinking heavily would probably also be close, though it wouldn't be good. (It would, however, be awesome.)

Grizzlies at 76ers - Elton Brand might actually decide to show up for a game for a change! Playing against the Grizzlies' defense will do that to a player. That being said, there is still almost no reason to watch or care about this game.

Heat at Raptors - Dwyane Wade has been in a shooting slump the past couple games, but the Raptors have (unsurprisingly) been good for his shooting touch in the past. Either D-Wade's going to drop a ton of points on the Dinos, or he'll jack up a lot of bricks trying. Either way, he'll be the most prominent thing about this game. Mark it down.

Rockets at Hawks - Oh, is this game going to be good for the comments section. How many bad shots will Trevor Ariza jack up while trying to prove himself as a starter? Are the Hawks legitimately that good? Will anybody really care?

Wizards at Thunder - The Thunder are quietly a decent team. The Wizards General are very blatantly a poor team. But good news everyone! Antawn Jamison's back in the lineup, so the Wizards Generals will have one less excuse for why they keep losing. This could be fun. Or terrible. I get the two confused all the time. Sorry everyone.
Kings at Mavericks - Well, so much for the Kings finally being at .500. Hope you enjoyed it while it lasted, Sacramento! (Sorry, Chris.)

Bobcats at Bucks - The league-worst team in turnovers versus... Milwaukee. Ugh. I had a discussion with a fellow NBA fan the other week, and he proclaimed that the two worst places for an NBA player to be sent in a trade were Toronto and Milwaukee, because "nobody's going to see you or care about you there." Hard to disagree, especially if you're in Milwaukee playing the Bobcats. I need a word stronger than "irrelevant." Anybody?

Sos said...
Irrevelant? How about Marbury?

Dan B. said...
(Sorry if anyone's posting comments that haven't been approved yet -- looks like I'm the only one around at the moment, but Bawful hasn't gotten me set up with the right permissions to approve comments yet. My apologies.)

Jeff Van Gundy just went on a nice jag about how the team on the second night of a back-to-back should not be allowed to have the game on national TV because it's always a blowout. Hmm, that sounds vaguely familiar to some points I've heard somewhere...
11/20/2009 7:45 PM

Nick Flynt said...
I pray to Mike Dunleavy Sr. that we may win tonight to silence the bawful, if only for a few moments. I remember....when the Clippers were good. It was the year 2005, and Sam Cassell was the starting point guard. Shaun Livingston hadn't blown out his knee yet. Elton Brand was having his best season (apparently the best of his career). Those were....the daaaays.
11/20/2009 9:08 PM

AnacondaHL said...
Okay, I guess my sarcasm didn't come through in e-mails, because I was completely joking when I suggested the "Bawful Doin' Work" title. Like, I was literally trying to think of the worst possible thing it could be, aside from Kobe Masturbatory Appreciation Thread.

AnacondaHL said...
BN: Did you catch the graphics around 11pm EST?

Wild Yams said...
I know it's pretty early to be asking this kind of question, but here goes: are the Celtics in trouble? They're now 3-4 in their last 7 games (after starting 6-0), and that now includes home losses to big East rivals the Hawks and Magic (who are missing Jameer Nelson, btw). In fact, the Celtics haven't really had a good win since they annihilated the 76ers back on Nov. 3rd.

Like I said, it's early, and if I was a Celtics fan I might not be pressing the panic button yet, but at the very least I might be scratching my head and saying "Hmmmm..." a lot these days. I'm not really sure what to point to there, cause they're basically healthy, and shouldn't be having any big chemistry issues due to new personnel I wouldn't think. I'm beginning to wonder if the Celtics, much like San Antonio, are maybe just a little too old, and that their window, while still open, has closed a bit from where it once was. Something to keep an eye on.

Upset City tonight in the NBA, with the Clippers beating Denver (huh?) and the Warriors trouncing the Blazers. The Rockets and Kings almost pulled off shockers against Atlanta and Dallas, but instead lost by a bucket apiece; and the Thunder put an end to all the happy thoughts the Wizards had accumulated after destroying the Crabs the other night.

But the big story tonight was Boston, who last led when the score was 6-5 in their favor. They kept it close throughout, but there's warning signs all over the place in this one. Rajon Rondo arguably got outplayed tonight by Jason Williams. Let that sink in for a second. Dwight Howard took only four field goal attempts and scored only 9 points. And of course, Jameer Nelson didn't play. Maybe Boston's just slumping and they'll round into form, but there's some troubling early season warning signs there I think. We'll see how serious they are as the season rolls along.
11/21/2009 3:11 AM

Anonymous said...
Ariza, as predicted, continued his streak of shotjackuppery by shooting 7/18 from the field. Fun Fact: Ariza has yet to shoot .500 from the field in any game in Nov, and is averaging .360 from the field, .306 from 3PT land. But you know, I'm sure that's exactly what the Rockets wanted. Someone to replace Knee Mac while shooting worse than him.

I didn't think it was impossible, but after all the close games losses, I figured they were ready to give up on the season like usual. I really like Smith and (surprisingly) Telfair. They give a great effort every time. When Griffin gets back, they may be good enough to give me hope for the future. Maybe. No jinx.
11/21/2009 11:08 AM

superstrongjohn said...
basketbawful, long time reader, first time commenter. this is kinda late but i always wanted to bring this to your attention. lebron james' growth in his "parotid gland."
i actually have the exact same thing and so it really got my attention because lebron is the first person i'd heard of that had the same growth.

i just wanted to say that i'm glad the media didn't make a big deal out of it. i've lived with the growth my whole life and it hardly bothers me. theres always a constant pressure below my ear and it hurts when people hit it in basketball, but other than that i forget about it.

anyways, i wrote about it on my blog www.superstrongjohn.com. the link to that particular entry is "http://superstrongjohn.blogspot.com/2009/10/before-i-start-i-noticed-that-i-had.html"

Clifton said...
Speaking of the Clippers: Their TV play-by-play team was suspended one game for apparently mispronouncing "Iranian" several times and saying that Hamed Haddadi looks like Borat:

Wild Yams said...
Did anyone notice that after Doc Rivers came out the other day and said he told Rasheed Wallace to take fewer three pointers, Sheed went out and shot eight of them last night?! Maybe that wouldn't be so bad except that he didn't hit one of them. Here's a tip: going 0-8 from distance in the first game after your coach went to the press to say he'd told you to take fewer threes probably won't win you many brownie points. I'm just sayin.
11/21/2009 4:08 PM
Post a Comment
<< Home
Subscribe
RSS Feed
Mailing List