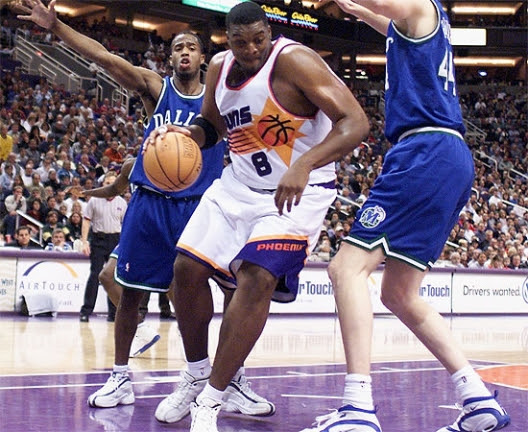 First it was Greg Ostertag, and now this: Oliver Miller wants to make a comeback. In an article that was appropriately titled "Fat chance? Humbled Oliver Miller eyes the NBA again," Miller admitted that he has a burning desire...only this time, it has nothing to do with cheese fries or random foodstuffs covered in delicious frosting and/or gravy. Well, mostly nothing.

Said Miller: "I miss [playing in the NBA] a lot. But I hate watching. I can't watch it. The first thing you hear them talk about is the lack of a big man. Here I am a big man and I'm unemployed."

Yeah, well, there are reasons for that. Miller -- who's weight had ballooned to 415 pounds before he started watching what he eats and acting as (don't laugh...actually go ahead and laugh) his own personal trainer -- is 39 years old and a slim 330 pounds. Oh, and he hasn't set foot on an NBA court since May 31, 2004, when he submitted a 5-minute, 4-foul performance against the Lakers. (He also had 1 block, 1 turnover and 1 missed shot.)

This is the same guy who was released by the Harlem Globtrotters for having "no appreciation for what it takes mentally and physically to be a Harlem Globetrotter." If Miller isn't qualified to spin a basketball on his finger or maybe headbutt it into a hoop, he's probably not ready for NBA action. (Even if he did win an ABA title with the Arkansas RimRockers in 2005.) But don't tell him that.

"I am better than ever," Miller said. "I am in better shape than I was when I was last in the league. I am moving around quicker. I feel a lot better. I can give you 25 good minutes and a double-double. And I am a whole lot better mentally, maturity wise. ... What motivates me is that people don’t believe me," Miller said. "I love challenges. My challenge right now is to lose more weight and get back in. I ain't trying to look like Dwight Howard. I know what I need to do. I would just like to get back in the game."

Good luck with that, guy.

DocZeus said...
Is that the incomparable Damon Jones and the immortal Shawn Bradley in that photo as well?

Nick Flynt said...
Nice one Will.

'Man, I bet if I got veteran's minimum I could buy my own Popeye's franchise. They wouldn't care if I skimmed a lil' spicy chicken for ma-self...I need to make a call to the Clippers...'

chris said...
If I'm looking at that correctly, Oliver Miller's last appearance was a 5:1 Voskuhl!!!!

The Dude Abides said...
My favorite quote of Barkley from his playing days:

During a Suns practice, Oliver Miller yelled at the backup point guard for not throwing him an alley-oop. Barkley chimed in with "Shut up, kid. You can't even touch the rim unless they put a Big Mac on it."
6/22/2009 9:00 PM

Raymond Blitzfucker said...
Maybe he just wants to hang out with Stag and his cakes.
And maybe NBA teams hsould consider hiring full-time necromancers on their teams from now on. The Spurs definitely need one.
6/23/2009 2:05 AM