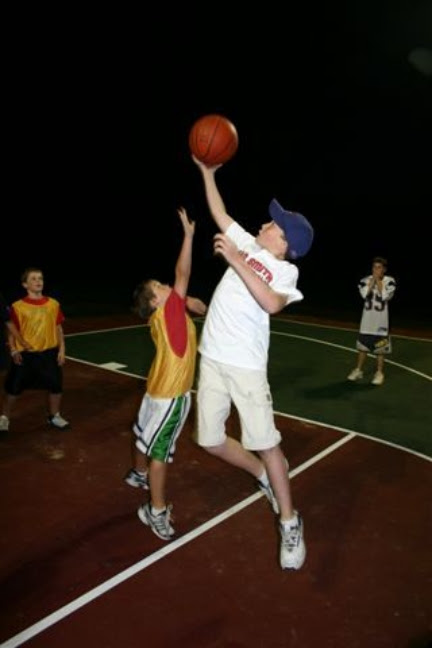 A layup from the free throw line?! That kid's a SWAC in the making.
SWAC (swak) abbreviation. Shooter without a conscience.

Usage example: Did you see that shot? A left-handed scoop from 23 feet? Man, that guy's a real SWAC.

Word history: The term was coined by my buddy Mark while we (along with Evil Ted) were discussing the previous night's pickup basketball games. As you know, we like to nickname the people we play with rather than learning their actual names. (Why make a personal connection? That could cause feelings of guilt and shame when making an embarrassment call.) We were trying to come up with an alias for a guy who's rather nondescript when one of us (I forget who) pointed out that his only defining characteristic was the fact that he attempts countless ill-adviced shots -- mostly from downtown -- without conscience or care, regardless of the fact that he cannot, in fact, shoot a basketball. All of a sudden, Mark blurted out: "SWAC! Shooter without a conscience."

A new word was born.

There are some ground rules that must be used when determining whether someone is a SWAC. A normally good shooter/scorer who starts out slowly or cools off late but continues to shoot is not a true SWAC. A SWAC must be someone who cannot shoot (though, by the law of averages, he will occasionally hit a shot or two) but insists on shooting nearly every time he touches the ball. He thinks "passing" is something that happens to kidney stones. In fact, it won't matter if he's several feet behind the three-point line or if he can't even see the basket. (I once saw one particular SWAC catch the ball at the foul line and then immediately chuck it up despite the fact that he was facing AWAY from the basket.) However, the SWAC must be blissfully unaware of his own limitations. He must believe that he is taking good shots, that he is justified finger-rolling from 17 feet out or maybe attempting a three-point hook shot. He must never feel bound by feelings of shame or the fear that his teammates will come to hate him for his pitiful shot selection. Only then will he be a true SWAC.

C.J. said...
In my pickup experience, there are two types of SWACs. One is sorta forgivable. That's player who has clearly never played organized basketball and has no idea what they're doing out there, and they chuck it up there because they don't know any better. I can't bring myself to yell at that type of player.

The SWAC that I hate is the guy who thinks he's Kobe Bryant circa 2005. He knows how to play, he knows exactly what he's doing, and yet continues to chuck it up at every opportunity. I hate that guy. It gets to the point where even when he takes a good shot, it's unbelievably frustrating. Players like that should be forced to watch clips of John Stockton over and over like like Alex in "A Clockwork Orange."

Nick said...
I live in Rome, and our high school team is filled with Italian kids who aren't good enough to play soccer, and an occasional American kid (i.e. me). Just about everyone of them is a SWAC, including flat footed fall away 3's, fast break 3's, and turn around jumpers that consistently fall comically short of the rim. Its kind of a nightmare out here, don't let the Bargnanis and the Gallinari's of the world fool you, Italians suck at basketball.
3/06/2009 12:06 PM

Anonymous said...
Here's how to get a handle on my Blazers: Youngest rotation in the league. Most of what they are missing comes from youth an inexperience. Games last night are , sadly, exactly what this team needs to go through to get where they need to be.
3/06/2009 12:15 PM

I just want to let you know i very much enjoy your blog. I think all of your posts and videos are extremely hilarious and represent the exact same perspectives my friends and I have on the game. And the fact that you actually play pickup and make these observations gives u that much more credibility.

I looked thru ur "ppl you meet playing pickup" post, it was great, but I think you may have left one out: quick asian with no control guy (maybe you were just being PC). My friends and I depict this group in this video we made for school. Let me know if youve experienced this kind of player, lol.

Basketbawful said...
Just so everyone knows, there is plenty more pickup talk to come. There are several stories I'm saving -- such as "I was a pickup Kobe" -- for the brutal nothing-is-going-on offseason.
3/06/2009 4:31 PM

This is the off season, but today you have plenty of ammo for a Footbawful post.

61 athletes cheat and all FSU loses is some lame victories accrued because they're in a pathetic ACC and a loss of 6 scholarships over 3 years.

If Roger Goodell is considered apeshit for his punishments in the NFL, the NCAA is the direct opposite in the way they handle laying down the law. Last time I checked, Reggie Bush still had a Heisman trophy too which should have been rescinded from him, along with USC victories...
3/06/2009 4:58 PM

Anonymous said...
If you were really serious about pickup basketball, you should twitter a game WHILE you play. Suck on that Shaq.
3/06/2009 5:17 PM

Anonymous said...
Would you say that a SWAC is likely to rag on his teammates when he thinks they take poorly selected shots? Or, would it merit (or, DID it merit) a separate WOTD if a SWAC also complains about every move his teammates make?

I shoot around a lot at these great outdoor courts by my house; but, 98% of the time, I'm the only there. I played ONE actual pick-up game in the last year or two.

One of the guys there was a SWAC; however, he was also relentlessly critical of his teammates. He would dribble into the lane with his head down, arms flailing; then, he would jump straight into the thick of everybody and throw the ball as high as he could in the direction of the hoop. A few times, he threw completely unexpected passes at teammates who were looking in the other direction; then, he got in their faces for not catching the ball. He even yelled at one of the 50+ year-olds for taking a WIDE OPEN three. This guy wasn't just a SWAC; he was a complete ASS, too.

Do you consider that commonplace for the SWAC? I feel like it falls a little closer to one of the previous WOTDs; but, I can't remember which.

However, I would - generally - consider Ron Artest to be a bit of a SWAC (or, at least, capable of morphing into one at any moment a la Bruce Banner "...you wouldn't like me when I'm shooting..."). But, he doesn't quite fit in your description of a SWAC, or your description of SWAC-like players who are not offical SWACs. Maybe, just maybe, he's his own man - uncategorizable. After all, he is completely insane.
3/06/2009 11:01 PM

Anonymous said...
Hey guys does this qualify as a SWAC???

Friday, Saturday, and Sunday games are all usually summed up on the following Monday in a "Worst of the Weekend."

The Cavs also seemed to lean on James and Delonte West (who has been awesome recently), as they each played 43 minutes. The J.J. Hickson Disappearing Act (initiated by the Joe Smith signing?) continued as he had 1 missed field goal and 2 TOs in 5 minutes.
3/08/2009 4:08 AM

LeBron didn't have as much of an effect as the box score would indicate, he actually played a fairly lackadaisical game. Mo Williams was and always has been the thorn in Miami's side. From killing them with the Bucks, to fooling them into thinking he'd sign with them in the summer of 2007 just to get more money, to killing them as a Cav now.
3/08/2009 1:43 PM

chris said...
Hey, remember AnacondaHL's epic "What I expected" montage from a WOTN? Turns out some random overseas website has mirrored it!