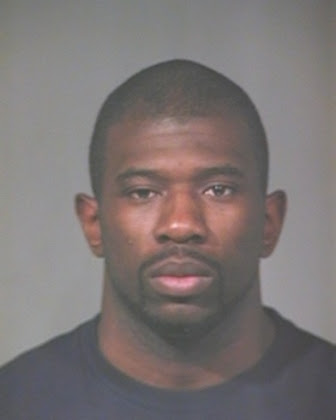 The Suns' Jason Richardson was
charged with unspeakable evil.
Jason Richardson of the Phoenix Suns did some hard time on Sunday night for driving 90 in a 35-mph zone in Scottsdale, Arizona, as his three-year-old son was rolled around "unrestrained" in the back seat, presumably while bound in barbed wire and covered in crawling insects. The official charges include: Endangerment, reckless driving, failure to use a child seat, excessive speed, and "being way more evil than Hitler ever was, even after his living brain was transplanted into that nuclear-powered robot body."

Parent groups are calling for an immediate execution by lethal ass-kicking, or at the very least permanent exile to some ghastly hell dimension where he will be transformed into a shapeless blob of flesh that can neither cry out in pain nor die, after which he will be beaten forever with a club made out of rusty metal and Jean-Claude Van Damme. Also, Doogie Howser, M.D. will be playing endlessly in the background. Some are calling the proposed punishment "too humane," while others believe "it's a good start."

Speaking of punishments, the Suns -- who absolutely WILL NOT TOLERATE such intolerable behavior -- have suspended Richardson without pay for Tuesday night's home game against the Los Angeles Clippers. Said Suns President of Basketball Operations and General Manager Steve Kerr: "This is about sending a message that our organization will not abide by such reprehensible behavior, even if it means severely handicapping ourselves during a game in our home arena against a bitter division rival like the Clippers. Seriously! They once took us to seven games in the 2006 NBA playoffs! And I assure you, this is only the first measure. We're also looking into docking his $30 per diem money when we play the Clippers in L.A. on Wednesday, and maybe even limiting him to one massage per day...indefinitely." Kerr then placed a pinky finger to his lips before reaching down with the other hand to depress a "Destroy The Phoenix Suns Forever" button, after which he erupted in mirthless laughter.

A remoseful Richardson is taking his medicine without the usual spoonful of sugar, but he can't understand why people are questioning his daddy skillz: "I just want to apologize to everybody, teammates, my family, especially my fiancee. This is a tough time for me. I've been questioned as a basketball player, questioned as a person, but my fatherhood in question is tough, because I try to be the best father I can be and try to keep my kids out of harm's way." This statement was issued shortly after Richardson finished throwing his children through flaming hoops but just before he used a bow and arrow to shoot various pieces of fruit off of the top of their angelic heads.

chris said...
Maybe Richardson just wanted to have his son experience the perfect analogy for Terry Porter's coaching tenure...what's SOOO wrong about that!?
2/17/2009 11:21 AM

AnacondaHL said...
Maybe I should have read the article earlier, I sorta just dismissed it as more Suns drama bull.

J-Rich was/is probably just not used to Phoenix driving, which is to drive at much higher speeds than average. But you only do this on the highways and main roads and outskirts of the valley, not on 64th street, and he probably doesn't have the speed trap/camera locations memorized yet. He just fell victim to the same trap many-a-bored rice boys fall into in Phoenix.

In his defence, ever since Pecos Rd was turned into 202 there hasn't been a definative street racing location in the valley. Of course, since 64th is a one lane road, and unless someone was pulling some dumbass Paul Walker Vin Diesel crap, I'm pretty sure he was just Phoenix speeding, not drag racing.

There's no defence of having a kid in the back while doing this though. Unless he was being chased by velociraptors. On hoverboards.
2/17/2009 12:16 PM

Anonymous said...
Hey, Bawful, nice reference to SF classic "I have no Mouth and I Must Scream". But methinks that simply sending him to the Clippers would be the most delicately evil of all conceivable punishments.
2/17/2009 1:14 PM

skr said...
Why doesn’t J-Rich have to take a 2 month leave of absence like Chuck did when he was pulled over in Scottsdale? Richardson had a DUI like 3 months ago too…maybe he should get Eddy Curry's old driver to take care of driving duties from now on.
2/17/2009 1:56 PM

The Filthy Logician said...
As a South Scottsdale resident, I can say with full authority that if you're not going 40 over the speed limit, people will yell at you in Arizona.