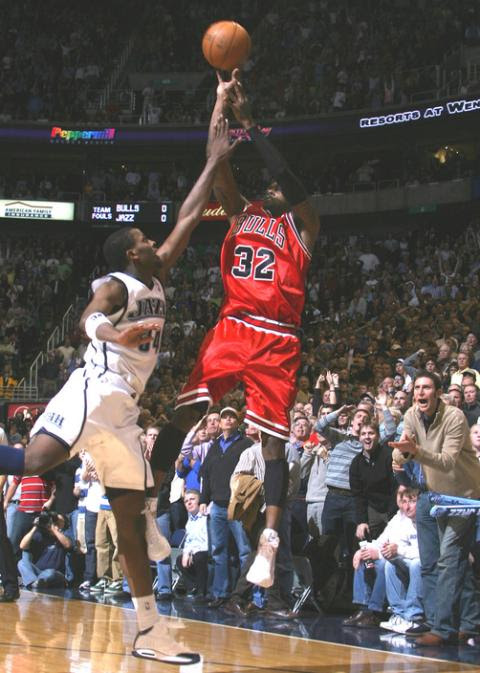 Congratulations, C.J. You've been dotted...by Larry Hughes.
dot (daht) verb. Describes those situations in which a players attempts and converts a jump shot over the outstretched arm of his defender.

"We named ourselves 'Club Trillion' because as athletically limited white folk, we found ourselves riding the bench for the Buckeyes. When the time came for us to get in, there would usually only be 1 minute remaining in the game and after sitting down for 39 minutes, we really had no interest in trying to be all that productive. So we devised the plan of trying to get the 'trillion' which occurs when we play 1 minute and do absolutely nothing that would appear in the box score, thus making our stat line say 1 minute played followed by a bunch of zeroes."

That's right. Not only are local NBA broadcasters all over the country now mentioning the trillion during games, there are college basketball players -- bench jockeys, but still -- who have dedicated their very existence to earning one. I would like to think that my exhaustive attempts to promote the trillion these last few years is partly (or even mostly) responsible for this and many other cool things, like toasted subs and the techno privacy scarf.

But I digress. One of the blog authors, who has plenty of time at the end of the Buckeye bench to devise side projects, came up with a "People To Dot" list. Here's how he explained it:

"We have a saying around the program that when someone shoots a jumper over a defender's outstretched arms, said defender just got 'dotted.' This phrase comes from the notion that the defender makes up the long part of the letter 'i' and the ball serves as the dot. We would call it 'dotting the i,' but apparently some other group at Ohio State came up with that phrase just a few days before we did. I suggested calling it 'tittling the i,' but the coaches refused to believe that the dot of an 'i' is actually called a tittle. Plus, that sounds incredibly inappropriate to say out loud. So we stuck with 'dotting.'"

There are a handful of hard and fast rules to the dotting process. They are as follows (note that I revised the author's original list):

1. The defender has to be making an attempt to challenge/block the shot.

3. The dot must occur in a live game situation.

4. (Optional) The defender must be informed that he was "dotted."

This not only provides something new to watch for when you're chilling out with NBA League Pass, but it provides new trash talk fodder for your pickup games. Of course, since most pickup ballers think "defense" is just "waiting to get back on offense," it might be a while to before you encounter an outstretched arm to shoot over.

AnacondaHL said...
Why can't I take this post seriously?

Anonymous said...
Give C.J. some credit. That there's a good hand in the face. And y'know, with Larry Hughes that is usually sufficient to result in a relatively low percentage shot.
11/25/2008 12:09 PM

eljpeman said...
Speaking of dots and the letter i, I've always thought that when someone gets hit on top of the head (inadvertently, I might add) with the ball while just shooting around, the one who got hit with the ball became a "dotted i".

And while we're in the topic of getting hit with the ball, when someone gets hit in the mug with the it, a friend of mine usually says that person just had a Spalding burger.

Said Redick: "I'm starting to feel more comfortable. I missed some shots [against Houston]. ... If my shot starts going in, I'm going to go from playing solid to playing great."

Anonymous said...
Those crowd reactions are great and so ambiguous.

That evil vampire woman(?), that guy with his mouth open probably shouting "COME ON!", the one throwing his hands in the air in disgust...not a demographic profile of the general NBA viewer (I don't see many vampire women) but fascinating nontheless.
11/26/2008 5:57 AM
Post a Comment
<< Home
Subscribe
RSS Feed
Mailing List