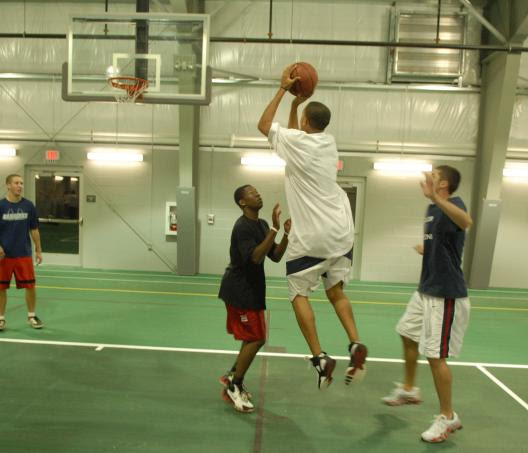 Got one? Seriously?! Buddha does not approve, my friend.
karma call (kahr'-muh kahl) noun. Describes those occasions during a pickup basketball game in which someone makes an iffy call simply because they feel it is owed to them due to one or more "bad" calls made previously by a player (or players) on the opposing team. This is the pickup equivalent of the makeup call.

Usage example: I know I didn't travel, but that guy was making a karma call.

Word trivia: Most veteran pickup ballers are intimately familiar with indignant rants like this: "Aw, come on, man. That call was bullsh*t. Well, fine. We get the next one, then." And make no mistake, when somebody makes a statement like that, they mean it, and a cheesy call will usually follow within the next five minutes.

Take last night, for instance. Someone on my team seemingly knocked the ball out of bounds. However, he called a foul, claiming his defender had whacked his hand. Now, that's where things should have ended, because -- in a perfect pickup world -- people are supposed to respect the call that was made. But the other team didn't respect it, not one bit, and the guy I was matched up against said, "Oh yeah? We got next call." About three or four possessions later, somebody partially deflected a pass to me and I had to battle for possession with a couple opposing players before finally gaining control of the ball. My guy immediately called traveling on me and made a determined beeline to the other end of the court. It was obviously a bogus call, but he wouldn't back down. I walked up to him and said, "You know that was a crap call, right?" He just said, "You guys got your call. That's ours."

What made the situation even more pathetic than it already would have been was that this guy's team was already up by double-digits -- yeah, it was just one of those nights -- and he was still getting all pissy about a call he didn't agree with...which wasn't even made against him and had no impact whatsoever on the game, by the way. And he used to play NCAA Division I ball for a major university. I figured he'd have a little more class than that.

Anyway, it's your standard "two wrongs make a right" logical fallacy. And I just don't get it. If you're against bad calls, then making a bad call in your own defense isn't going to change anything. It only perpetuates the "bad call" system by actually encouraging calls that are made out of spite and a sense of entitlement. Here's a lesson everybody should take to heart, no matter what level they play at: You earn a call. They aren't owed to you.

Cortez said...
"And I just don't get it. If you're against bad calls, then making a bad call in your own defense isn't going to change anything."

These are the same type of people who would find themselves in a gay club joining in on the fun just because everyone else was doing it.

"However, he called a foul, claiming his defender had whacked his hand."

Lord Kerrance said...
I hate that stuff and I don't do it, but I know how frusterating it can be when people make bad calls. Any suggestions on how to deal with that?

@ Cortez: I haven't been getting my daily recommended dosage of WTF? lately, but you've helped me out with your last couple of comments. Please unprivate your profile so I can read any and all of your blogs.
10/23/2008 12:25 PM

Cortez said...
"I haven't been getting my daily recommended dosage of WTF? lately, but you've helped me out with your last couple of comments."

Im curious, what caused you to say WTF in my last comments?

"Please unprivate your profile so I can read any and all of your blogs."

B-Will said...
Wow, the Karma Call, I love the Alliteration.

One interesting thing that happens in pickup is when questionable calls go to the team that is "DUE". When you win a pickup game the reward is you get to stay on the court for another game with the same group of guys. Another perk of winning is that you get first possession (I have yet to see a pickup game where they do a jump ball;).

I know this is kind of petty of me, but when a questionable call occurs (And don't they always) they default to the team that didn't start with the ball. FAIR? I don't know... maybe... but that is another thing to add to the Karma Call.

P.S. your word verification gave me the following letters: BICHCO is that what you call a possey's female counterpart?
10/23/2008 12:52 PM

Anonymous said...
read your magic preview
don't mean to be picky (maybe i do actually who knows)
but O'neal wears a headband (during preseason) and I definitely remember mo pete wearing one since the highlight made play of the day once
10/23/2008 1:52 PM

Lord Kerrance said...
"These are the same type of people who would find themselves in a gay club joining in on the fun just because everyone else was doing it."

No idea what's happening there. I was also interested in yesterday's comments claiming a metaphysical kinship to Bawful while calling him a self-absorbed egomaniac (and if enough people are "misinterpreting" you, could it be that you're not explaining yourself well?).
10/23/2008 2:05 PM

As if your personal honor and integrity is subject to events, that you would normally object to, happening around you.

It makes just as much sense as being in the gay club and joining in just because it's happening around you.

"...Bawful while calling him a self-absorbed egomaniac"

That was a joke (and I would guess B'awful got it).

There is some history here.

A few posts ago I referenced some basketball drills I run although I am not a professional basketball player.

It turns out B'awful does some similar things despite being a 'pick-up player'.

I don't think he is an ego-maniac and I'm sure he smashed that idiot who challenged him just because he was white.

The metaphysical comment was in relation to his descriptions of likes and dislike in the sports world (they align with mine almost perfectly!)

For example...
Celtics
Larry Bird > [Fill in the blank]
Hard play on the court

"and if enough people are "misinterpreting" you, could it be that you're not explaining yourself well"

That's very possible as I am not a professional writer, and I considered that.

But when I go back and reexamine the back and forth, I am going to go with the theory that most people are mildly retarded.

You would have to start at the last WNBA post to piece this nonsense together.

XForce23 said...
I've actually never had this phenomenon happen at the gym where I play. If people don't agree over the call and a decision cannot be reached, we simply let the guy shoot for it from 3. The ball don't lie.
10/23/2008 4:55 PM

the differential said...
Yeah. I hate that crap. But you need to find a term for passive-agressive bullshit. that one's good. When you make a call, and they adamantly refuse to give up the ball, and then suddenly give it up and insist that you take the ball...

Anonymous said...
Cortez,
why must you so deeply analyze every post?

Drake said...
I usually never argue, and go by the 'respect the call' rule in hopes that everyone will ref the game honestly. But it's not necessarily what my teammates or my opponents are thinking, especially on egregiously bad calls.

But on heavily disputed calls, we do what Kevin suggested: shoot for ball at the top of the key. I'm a little murky on who actually does the shooting: is it the person calling the disputed foul, or is it the person who disputes the foul? Sometimes, when there are multiple disputes during a game, each team takes turns shooting the three.
10/23/2008 9:23 PM

Paraphrase a one sentence question? Right.

I suppose I could make some reference to the question in my comment, however, since this a comment section you have no idea of the order, or number of comments, that will be added before you respond I find it help for anyone reading this, ultimately irrelavent nonsense, to be able to follow the orginal path, hence...the quotes.

My first comment was two sentences (quotes notwithstanding!), directly related, and in agrement, with the topic.

The second was in response to a direct question.

As a side note, I wonder, did you bother to ask yourself why B'awful himself must "deeply analyze" minor nuiances and quirks in pickup games that have ZERO meaning to life?

Anonymous said...
Well, you could argue that everything you (or anyone else) do (does) has zero meaning to life.

Anonymous said...
"Karma calls" in pickup is why I changed my recreational sports to triathlon.

Anonymous said...
Seems perfectly legit to me. The someone on your team making a bogus call needs to know he will be called on it, whatever the score or situation. It is this type of in-game policing that keeps guys like that something vaguely close to honest.
10/25/2008 1:13 AM

Anonymous said...
The Very Worst of Professional Philosophy? I can see it now!

Tuesday Afternoon Marx Love, Fan Submissions by Locke and Descartes....you might be on to something baddave.
10/25/2008 6:58 AM