I just read (via TrueHoop) that the Celtics have waived Darius Miles. Thus ends one of those strange paradoxes of the NBA offseason: Contradictory expectations. To wit: It was generally conceded that Miles was, at best, a longshot to make the team. However, it was also believed (by more than a few people) that -- if his services actually were retained -- that Miles could help fill the gaping hole in the team left by the departure of James Posey.

So he was either going to get cut or replace a guy who, during the club's championship run last season, was utterly irreplaceable? Really?

No, not really. Miles never had a chance. But the Celtics have faced those kinds of false hopes before. Like when they thought Bill Walton would be ready for the 1987 NBA playoffs or, at worst, the next season. Or when they thought Derek Smith could be the elusive missing piece in 1990-91. Or when they thought Xavier McDaniel and then later a washed-up Dominique Wilkins could cover for the retired Larry Bird. So on and so forth.

Anyway, the following picture ran with the article I linked to above. It was accompanied by the caption "Darius Miles' return to the NBA will not be with the Celtics." For some reason the picture/caption combination cracked me up. 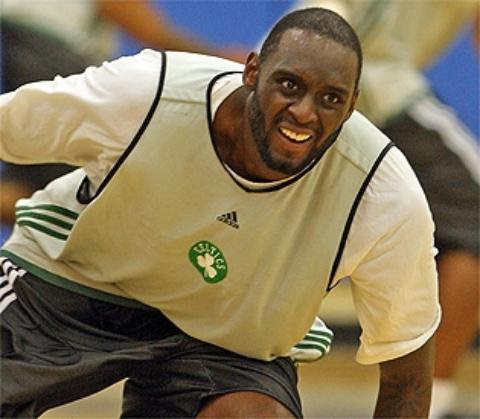 I don't remember him looking like such a spaz. Do you?

B-Will said...
Portland is probably super happy about this.

Unknown said...
Also some kind of space-time singularity has been avoided here. Beause Miles was once tauted as 'a skinny Kevin Garnett'.
So can't have both of them on the floor at the same time without causing major disruptions in the continuum.
10/20/2008 4:22 PM

Anonymous said...
I'm pretty sure that picture combined with any caption would make me chuckle...

Anonymous said...
Thats just mean! Nobody cares about this boy´s hopes and dreams... he could have been a HUGE star in the NBA, he could have made millions of bucks and you guys are mocking him?!?

Anonymous said...
This actually makes me very sad. The Clips at the beginning of the decade had SO MUCH potential, and now both Odom AND Miles are now league laughingstocks.

Anonymous said...
The Celtics were just teasing him.

Anonymous said...
doesn't he kind of look like KG in that pic though? a ferocious "i'm going to eat your children" defensive face. just shave his head and bear (leave a goatee).

Anonymous said...
Miles would have had a chance if Boston didn't sign Testicle Dance Cassell to guaranteed money, bringing the amount of guaranteed contracts on the team to 15. Ditto Scalabrine, if they cut BS in favor of Miles that would mean they were essentially spending ~$7 million for the next two years on Miles, with no guarantee of any production.