You know how ESPN.com provides current headlines and links on their NBA player pages? Well, take a peek at what recently popped up on Bill Walker's player profile... 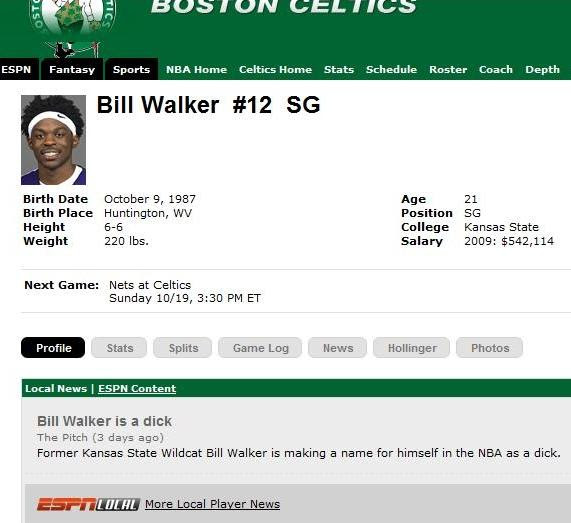 Somebody better adjust that automated headline retrieval application...
This wasn't some amazing feat of computer hackery, either: It was a link to a real article:

"Former Kansas State Wildcat Bill Walker is making a name for himself in the NBA as a dick. The Boston Celtics rookie acts like a punk throughout this three-minute video. He tangles with all-stars Tracy McGrady and Yao Ming of the Houston Rockets, and McGrady knocks Walker on his ass. Walker apparently didn't learn his lesson. Later in the video, he starts pushing Ming, and riot-starter Ron Artest actually plays peacemaker. Nice, Walker. You actually made Artest appear angelic."

And in case you haven't seen the video being referenced, here it is:


Thanks to Basketbawful reader Mark for the head's up and the screen shot.

Anonymous said...
hands-down, best part of that video: eddie house talking shit and throwing a little shove then jumping back like a kitten that just got sprayed with water when mcgrady charged, starting to take a few steps forward once he saw that t-mac was getting restrained, and then backing down again.

Dunpizzle said...
You should upload the video from the Boston commentators. If you wasn't watching the game and didn't know basketball, you would think T-Mac is a combination of Charles Oakley and Anthony Mason after listening to Heihnson.

Drake said...
T-Mac definitely shoved Walker in the first play. And from the far angle, it looked like Walker was doing Ginobili-style flopping of his own because T-Mac didn't look like he shoved him that hard.

As for Walker's scuffle with Yao Ming: it depends on whether you're violently opposed to moving screens or not. And from the looks of his hissy fit, it appears that Walker was highly offended. Also, there's nothing subtle about the biggest player in the league moving on a pick, and moving clumsily at that.
10/22/2008 2:18 PM

Anonymous said...
Oh come on. You shouldn't let people walk over you but it's a freaking preseason game and you are a freaking rookie. Give him a dirty look or stand above it, or something. And behave a little more mature. However, that seems to be difficult for a lot of players in the NBA, even some vets.
10/22/2008 2:32 PM

Anonymous said...
the usual classless actions of the Celtics, the only thing that was missing was Pierce on the floor crying, waiting to be carried off the court.
10/22/2008 5:26 PM

Anonymous said...
That is awesome. I'm glad that "dick" is becoming a bigger part of the American lexicon. Just imagine the possible headlines we'll read in the near future."President tells Congress, "Stop acting like a bunch of dicks"" and "David Stern;"Mark Cuban's a dick" and so on and so forth.
10/22/2008 5:56 PM

Drake said...
Whoops! I meant to say that that Walker definitely shoved T-Mac, thus the retribution shove from T-Mac that sent Walker into a Ginobili-an sprawl.
10/22/2008 6:35 PM

Anonymous said...
Do you guys realize that Dic... I mean, Walker, is making more than a million dollars to do that?!?

Anonymous said...
"hands-down, best part of that video: eddie house talking shit and throwing a little shove then jumping back like a kitten that just got sprayed with water when mcgrady charged, starting to take a few steps forward once he saw that t-mac was getting restrained, and then backing down again.

impressive, eddie. acting tough when you know you won't get hit and recoiling like a bitch when you think you are."

- I think it was Artest himself who invented this tactic, or at least popularised it, during the riot at Auburn Hills. When he was squaring up to short, overweight fans it was all good but as soon as a Detroit player gets involved he's like "hold me back!"
10/23/2008 7:25 AM

Anonymous said...
@ Will C: Don't be an idiot, Ron Artest would've dropped Bill Walker's b!tch@ss. Don't bring him into this. Bill Walker is a piece of sh!t who will be taught a lesson one day by the real ball players who deserve to be in the NBA. As for Eddie House, well, I bet Starbury will kick his @ss this season sometime. On the court or off of it...
10/23/2008 8:30 PM

Anonymous said...
This walker guy needs to cool it. Its good for rookies to show intensity and a fearless attitude on the court, but theres a time and a place for fights! I heard he has a reputation of being a pretty respectful, mature, and polite fella. Thats not really what the video shows. Looks to me like he just knows how to talk to the media. Besides, I read a rumor that as soon as he was signed to the celtics, he dumped his girlfriend in a very rude fashion. Claiming that he was too rich now and busy entertaining all the new females he was getting in boston. Some guy.
10/23/2008 11:43 PM
Post a Comment
<< Home
Subscribe
RSS Feed
Mailing List