Wednesday, September 10, 2008
Word of the Day: Dunning-Kruger effect
By Basketbawful at 3:28 PM
18 comments 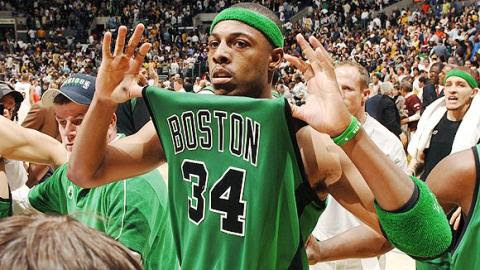 Dunning-Kruger effect (dun'-eng kroo'-guhr e-fekt') noun. The phenomenon wherein people who have little knowledge or skill tend to think they know more or have more skill than they do, while simultaneously overlooking or underestimating the knowledge and skills of others.

Usage example: There's this guy in my pickup league who couldn't hit a shot if a genie gave him three wishes and he used all three to do it...but he always chucks it up without conscience. He must be suffering from Dunning-Kruger effect.

Word history: The term is based on a series experiments performed by Justin Kruger and David Dunning, both of Cornell University, the results of which were published in the Journal of Personality and Social Psychology in December 1999. Here's an explanation from the abstract:

People tend to hold overly favorable views of their abilities in many social and intellectual domains. The authors suggest that this overestimation occurs, in part, because people who are unskilled in these domains suffer a dual burden: Not only do these people reach erroneous conclusions and make unfortunate choices, but their incompetence robs them of the metacognitive ability to realize it. Across four studies, The authors found that participants scoring in the bottom quartile on tests of humor, grammar, and logic grossly overestimated their test performance and ability. Although their test scores put them in the 12th percentile, they estimated themselves to be in the 62nd. Several analyses linked this miscalibration to deficits in metacognitive skill, or the capacity to distinguish accuracy from error.

Incompetent individuals will be less able than their more competent peers to gain insight into their true level of performance by means of social comparison information. In particular, because of their difficulty recognizing competence in others, incompetent individuals will be unable to use information about the choices and performances of others to form more accurate impressions of their own ability.

I know. There were a lot of big words in there, so let me break that down for you: Most people think they're better than they really are, but they're too stupid to realize it. And that same stupidity makes it difficult (and sometimes impossible) for them to recognize skills and competence in the non-stupids, which perpetuates their cycle of idiocy and megalomania.

Boy, that explains a lot, doesn't it? You see this in every area of life, including basketball. Pickup leagues are filled with suffering from the Dunning-Kruger effect. You know, the guys who insist on shooting the ball without regard to how pitifully low their success rate is. There's this one guy I've played with for years, and to my knowledge he's never hit a three-pointer, and yet he fires up two or three of them a night. I've always wondered why those people never "get it"...and now I know.

This condition is not limited to amateur athletes, of course. The NBA if chock full of players who are trapped in the strangling nets of the Dunning-Kruger effect. Take Stephon Marbury, who once said: "Don't get me wrong, I love Jason Kidd, he is a great point guard. (But) how am I comparing myself to him when I think I'm the best point guard to play basketball? That makes no sense. I can't compare myself to somebody when I already think I'm the best. I'm telling you what it is. I know I'm the best point guard in the NBA" Starbury said this during the period of his career when, as Statbuster once put it, he was always good for 20 points, 10 assists and 50 losses.

Then there's Paul Pierce, who this summer was asked if Kobe Bryant -- the reigning MVP of the league -- was the best player in the world. Paul, fresh off an NBA championship and Finals MVP award, responded as follows: "I don't think Kobe is the best player. I'm the best player. There's a line that separates having confidence and being conceited. I don't cross that line but I have a lot of confidence in myself."

Paul took a beating in the media and across the blogosphere for that comment. But he didn't retract it or try to claim he was misquoted or that his words were taken out of context. He emphatically underscored his original statement when he said: "That's what I said. I am a confident player and a lot of people might look at it like 'Oh, another cocky attitude,' but I don't look at it that way. I have an opinion, I have a right to have one and that’s the way I feel. I felt I’ve played against the best over the years and felt right now that I'm the best player in the world."

With all due respect to Paul, because he is a fantastic and versatile player, he's not the best in the world. By, like, quite a bit (although probably not as much as some of his critics would claim). Now, the typical justification given for statements like this is that professional athletes need to be confident, lest they be chewed up and spit out by a system in which only the strong -- both physically and mentally -- survive. But isn't a certain amount of self-awareness also important? Especially as skills diminish and circumstances change.

Take Shaq for example. Based on some of the things he said last year, he thinks he's just as good as he ever was. Such as when, at the beginning of the season, The Big Geritol claimed he was going to return to his old dominating ways. "As a tamed tiger now, you always go back to what you know, a la Siegfried and Roy. I've been tame the last couple years, but here’s a chance for me to go wild again." Of course, the new version of Shaq "going wild" featured him nearly fouling out of every game he played before going down with a bum hip. Shaq's inability to recognize his diminishing skills hurt his team. The same thing happened when Michael Jordan was playing for the Wizards.

Anyway, now that I'm aware of it, I'm going to be on the lookout for ongoing examples of the Dunning-Kruger effect.

[Many thanks to AnacondaHL for bringing this disorder to my attention.]

Dima said...
You know what really annoys me, Basketbawful?...It's when "Scientists" spend years and money on studies that "prove"(more like correlation) something so we already knew and my 12 year old brother could have told us. Thank you Kruger and Dunning- how enlightening!
9/11/2008 11:19 AM

DDC said...
....I've been tame the last couple years, but here’s a chance for me to go wild again." Of course, the new version of Shaq "going wild" featured him nearly fouling out of every game he played before going down with a bum hip.

That sentence alone is why I visit www.basketbawful.blogspot.com everyday. The amount of awesome in that sentence can not be quantified.
9/11/2008 1:47 PM

Roger Federer is the best Tennis player in the world, or has been for a long time. Do you think Nadal ever thought that way?

These aren't people who don't have the ability to correctly assess their level of skill, they're simply people with the confidence that allows them to be great.
9/12/2008 2:51 AM

Lord Kerrance said...
There's a difference between saying "I'm going to outplay so-and-so" to pump yourself up for a game and telling a reporter that you think you're the best player in the world during the off-season.

There are so many guys who you could name this after. Ruben Patterson comes to mind. I think the man who deserves it most is Zach Randolph: not for his career per se, but for THAT possesion against the Raptors that made the Worsties. I haven't stopped laughing at that yet.
9/12/2008 9:45 AM

Five Pound Bag said...
I also think the D-K Effect is misapplied to Paul Pierce. It's about incompetent people who think they're good despite evidence to the contrary, as opposed to phenomenal players who think they're the phenomenalest because they can get to the rack on anybody and outplay LeBron and Kobe in the same postseason.

eeen said...
the corollary of this effect is that people who really know stuff have an analytic ability most people can't see. what I thought, watching the finals, was that Pierce in no way had many of the obvious natural talents of Kobe, but on a millisecond by millisecond basis made much better instant decisions that really counted towards the final result differential. And Pierce, as the decision maker, would be able to see this difference
9/12/2008 12:40 PM

Anonymous said...
Why do people have to say that Kobe is the best? So what if he's the reg. season MVP? There are many reg. season MVP's that didn't get to be called the best in the world. (eg. Barkley, Karl Malone, and recently Dirk). Since Kobe didn't help the Lakers win, shouldn't he be in that category until he wins a Playoffs MVP? DWade was called the best player on 2006, why can't P-Double? Just Saying...
9/12/2008 12:42 PM

Unknown said...
Paul Pierce was asked if he thought Kobe was the best and I can see why he doesn't. He is roughly the same age and size as Kobe and they do roughly the same things on the court (their career per game averages are very similar). He has outplayed Kobe head to head in both the regular season and the finals (basketballreference.com). He has reason to think he is better than Kobe. I don't think he would have said he was the best 5-6 years ago when shaq was in his prime.
9/12/2008 9:21 PM