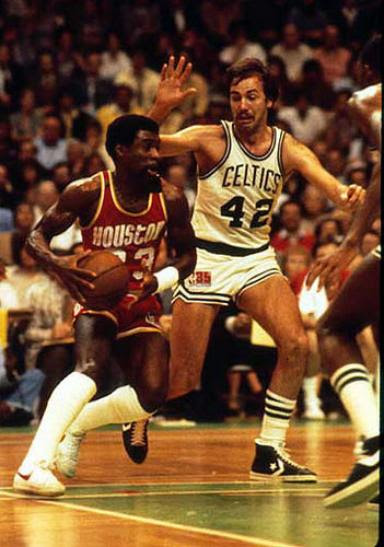 Calvin Murphy (kal'-vin mur'fe) noun. Denotes those occasions when a player finishes with 14 points and either 9 rebounds or 9 assists.

Usage example: I had a Calvin Murphy in a church league game last night: 14 points and 9 boards.

Word history: The term was coined by Ryan of Loudvillain, who created it "in honor of Calvin Murphy, who is thought to have had 14 children with nine different women. Not to be confused with a 'Kemp Dozen.'" It has been officially inducted into the Basketbawful Hall of Statistical Anomalies, along with the one trillion, the Mario, and whatever else you wanna name...

DDC said...
I remember hearing about this a few years back and I can't state enough how astounding this is to me. I just know really thought about how profilic Mr. Murphy was. 14 kids!!!! 9 women!!! That is some serious fucking right there!
6/23/2008 4:01 PM

Little off-topic here, but I was perusing your words of the day (noted above) and I noticed you failed to address Mr. Bill S. Preston's formal title:

Me. Friend of Bamboo. said...
It doesn't get much better than this.