Some days you just wake up and hit the jackpot. For me, today was one of those days. And in this case, the "jackpot" arrived in the form of the following e-mail from a reader named Martin.

"I recently completed a trip to China. The Chinese are famous for their use of unauthorized images of Western celebrities on billboards and other ads. I stumbled across this excellent example walking down the streets of Yonkan. It was a small billboard in front of a sex shop. An Angry looking Dwyane Wade will have a hard time to convince me to buy this sex pill. However, an angry Dwyane Wade who's on this pill, which is 'effective for man only,' might do the trick in a prison shower scene." 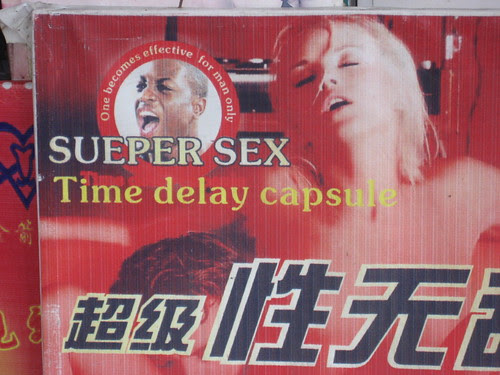 That look on Wade's face is pure pricelessness. It's the perfect (and somewhat bizarre) mixture of shock, rage and unsurpassed joy. It's like the pill just caused his penis to spontaneously grow ten feet and then explode. (My guess? That's the expression he made when the the Miami's 2007-08 season finally came to an end.)

Bad news for the erectionally-challenged: Based on my own experiments with Chinese penis supplements -- done solely for the sake of scientific curiosity of course - I can tell you that the "time delay" lasts roughly forever. So do yourself and your genitals a favor and buy your fake Viagra from Canada or Mexico like everybody else.

Update! Basketbawful reader DavidD had this to add: "That looks like the NBA Live 06 (?) cover shot of Wade. Or that could be his reaction to Star Jones naked...." Now, personally, I thought it was the latter. Turns out it was actually the former. That is, indeed, Wade's cover shot from the Xbox 360 version of NBA Live 06. And I'm guessing that the makers of the Sueper Sex time delay capsules did not get permission from D-Wade or EA Sports ("It's in the game!").

Hersey said...
Why does making these covers seem like the funnest job EVAH!

Wild Yams said...
When you update the Basketbawful banner at the top of the page to reflect that it's the offseason (and not the playoffs), that picture better be in it :)
6/26/2008 4:19 PM