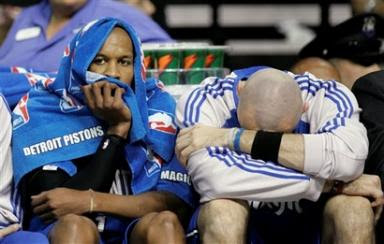 The Orlando Magic: They had every opportunity to steal Game 5. Detroit's starting point guard -- All-Star Chauncey Billups -- missed the game with a hamstring injury. (Or am I supposed to just call it "a hamstring" these days?) The Pistons shot only 36 percent from the field and 3-for-14 from distance. And still the Magic lost.

Orlando managed to miss 12 freethrows and commit 21 turnovers...which led to 34 points for the Pistons. So basically -- MATH ALERT!! -- the Magic gave Detroit 46 free points, which is a lot to give away in a 5-point loss.

It's also worth noting that the Magic forced only 3 turnovers -- and none after the first quarter -- despite the fact that the Pistons had to play a rookie, backup point guard for 33 minutes.

Dwight Howard: He dominated the boards (17), but he shot 6-for-15 from the line and threw the ball away 4 times. It might be time to change his nickname from "Superman" to "Shaq Jr." And that is not a compliment.

The Big Three Butterfingers: Dwight, Hedo and Rashard combined to commit 15 of Orlando's 21 turnovers. So if I was Hubie Brown, I'd be rasping out that "You cannot win on the road in the playoffs when your top three scorers are turning the ball over."

Hedo Turkoglu: Okay, this was more of a great play by Tayshaun Prince than it was a boned play by Hedo, but it's still a bigtime shutdown in an elimination game. Ego-ectomy, anybody?


For the record, the Magic accumulated 76 assists and 76 turnovers over the course of this five-game series. So I'll go Hubie on you again and say, "That is not a good ratio, okay?"

Rip Hamilton: He scored 31 points and was 16-for-16 from the line. But that's not the performance that bugged me. It was another performance that happened in the third quarter that got on my nerves. Hamilton lost the ball on a drive, then flailed around to try and get the call. He didn't, and Orlando ran downcourt and hit a three. I immediately thought to myself, "He's going to get a make-up call next time downcourt." Sure enough, Rip got the ball, ran around a screen, drew contact and got the whistle. There was only one problem: The contact was clearly initiated by...Tayshaun Prince! And since the Magic were in the penalty, Rip got two freethrows. I really hate officiating sometimes...

Detroit's bench: Rodney Stuckey started due to Billups' injury, and he played great (15 points, 5-for-10, 6 assists, zero turnovers). Without Stuckey to lead them, the Pistons reserves sucked a fatty: 4 points on 1-for-11 shooting, 7 rebounds, 2 assists in almost 45 minutes of lack-tion.

Arron Afflalo: He had a mario last night: 1 second worth of PT.

Tim Duncan: Has Timmy been hitting the Hurricanes down in the Big Easy? Because he's been shooting with some blurry vision in New Orleans. Duncan shot a combined 7-for-20 in Games 1 and 2, and he was 5-for-18 last night. He tried to make up for it by grabbing 23 rebounds -- which is the single-game high for this year's playoffs -- but the Spurs rely on three players to carry the bulk of their scoring load...and Tim's one of those three players.

Manu the Starter: Starting Manu over Michael Finley was exactly what the Spurs needed in Games 3 and 4, but it backfired last night. Manu scored 20, but he was only 5-for-15 from the field. Moreover, Finley scored only 2 points (1-for-6) in 15 minutes. I think it's pretty clear that Finley's effectiveness is reduced almost to nil when his minutes are drastically reduced.

Anybody who guarded David West: Holy Moses. West was so hot last night that I got first degree burns from just watching him destroy any and every Spur who dared to defend him. Tim Duncan included. West finished with 38 points, 14 rebounds, 5 assists and 5 blocked shots. If you thought Fabricio Oberto was ugly before, imagine what he looks like now that West scorched his eyebrows off.

Bonzi Wells and Mike James: Remember how the Hornets brought these guys in to give them a little extra punch off the bench. Well, that punch has turned out to be a nutshot, but not to the Hornets' opponents. Bonzi scored zero points (0-for-1) and committed 3 fouls in 6 minutes, and James -- a classic Catch-and-Shoot-22 guy -- scored 3 points in a little less than two minutes of garbage time.

Robert Horry: Okay. Now that he finally surpassed Kareem Abdul-Jabbar for the most playoff games in NBA history (238), it's time for Ben Gay Bob to hang up his sneakers. He played 7:22 last night, and he finished with more fouls (4) than points, rebounds and assists (3). He's officially gone from "Can't measure his contributions on a stat sheet" to "Can't measure his contributions in any way, shape or form."

Gregg Popovich: His Hack-a-Whoever strategy combined with his stall ball tactics make me hate basketball. Scratch that. They make me hate watching the Spurs play basketball. I guess that's what Pop would call "championship basketball," but I call it unwatchable bullshit. Excuse my French, Tony.

(Why oh why is there no YouTube of Gregg's little tete-a-tete with Joey Crawford?)

Random fun: Ah, Sir Charles. You continue to be my man crush. Last night, Chuck "mistook" Stan Van Gundy for Ron Jeremy. I really hope that's only because of the mustache. (From Odenized.)


NBA.com: Did you know LeBron James is white? Me neither. Thanks to Rhian from Brazil for the amusing find.

I think he caught his mistake but wasn't sure how to fix it. Until Marv Albert finally pronounced it correctly. Talk about awkward.

Anonymous said...
Funny think about how Chuck "mistook" Stan Van Gundy for Ron Jeremy is that if you look at Stan's shirt it actually has a picture of Ron Jeremy on it.
5/14/2008 10:37 AM

Anonymous said...
How the fuck do you even record a single second of playing time? You come in for the first free throw and out for the second?

"After straining his back, David West is doing his best to stretch out and get loosed up. He's just tryin to get loosed."

HAHAHAHA he said it twice.

Anonymous said...
Hedo has missed 3 game winners/tiers in this series at the end of games. SVG even addressed this after game 4, WHY did Hedo/SVG not come up with something new?
5/14/2008 4:37 PM

Anonymous said...
Arron Afflalo actually qualified for a SUPER Mario... Give him the respect he DESERVES!..