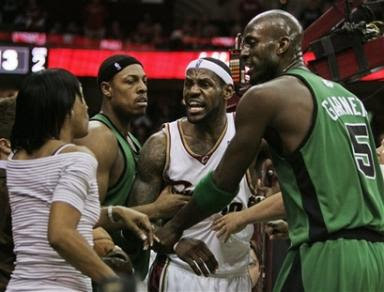 The Boston offense: The Celtics shot 38 percent from the field and 3-for-14 from beyond the arc. Now, without doubt, this was in large part due to the Cleveland defense. But...it's also because Doc Rivers' offensive schemes are slow, plodding and predictable. And, as Charles Barkley pointed out after the game, the Celtics walk it up the court -- slowly -- and their main players are all jump shooters, so they rarely get easy baskets. Especially in the late stages of hard-nosed, defensive games.

Another big problem is actually a function of Boston's unselfish share-the-ball philosophy. Since they never run the offense primarily through any one player, none of their money shooters ever get on a big roll. When was the last time, for instance, that Paul Pierce went off for 40 points? If Doc senses one of his big guns is slumping, he'll run a handful of plays to try and get that player going, but it rarely lasts beyond one quarter. As a result, there's no real continuity and all of Boston's end-of-game possessions feel awkward and forced. Which, again, is in part attributable to the opposing defense. But it's also because the Celtics don't have an offense that creates easy, open shots for their players...and their players can't create them on their own.

The Big Three: Kevin Garnett, Paul Pierce and Ray Allen all got shut down last night. KG scored only 2 points in the second half...and zero points in the fourth. Ray Allen shot 4-for-10 and once again struggled mightily to even get open, especially during his scoreless fourth quarter. Paul Pierce dropped 6 points in the final period, but he finished the game with 13 points on 17 shots. As Sir Charles -- and Evil Ted -- noted, it's probably past time to stop referring to these guys as The Big Three. Larry, Kevin and Robert earned that title, so let's make the new kids on the block earn it before we give it back to them.

LeBron James' shooting: King James had a strong game -- 21 points, 6 rebounds, 13 assists, 3 steals, 2 blocked shots -- and he took over in the fourth quarter, dropping dimes, hitting a dagger three and dropping a dunkbomb on KG (more on that below). But his shooting is awful, even by our ultra-low standards. Let me put it this way: He was 7-for-20 last night, and he actually improved his shooting average for the series (to 26 percent). If I was LeBron's teammate, I'd be afraid to touch the ball after him; there's no telling whether his shooting disease is contagious.

Kevin Garnett's potty mouth: The Big Ticket had some not-so-nice words for the Cavaliers and their fans. And TNT was nice enough to let us read his lips in slo-mo. (From Odenized.)


Gloria James: Ah, moms. They will do the craziest things -- and I do mean craziest -- to stand up for their sons. Even going so far as to go crazy on professional athletes during a nationally televised broadcast. Which is kind of embarrassing for LeBron, but great for this site. (Also from Odenized.)


LeBron James' potty mouth: Okay, yes: His mom got a little spaztastic, but did LeBron really need to dress her down in such a strong fasion? I mean does he kiss his mom with that mouth?


Said LeBron: "I told her to sit down, in some language I shouldn't have used. Thank God today wasn't Mother's Day. All I could think about is her. I know my mother. It's fine, we're good." Maybe. But I'm guessing Gloria is going to get a couple dozen boquets of roses delivered to her today...

LeBron the Monster: This is from Basketbawful reader Jin."I was watching the top plays over at NBA.com, and on number number one they naturally have LeBron dunking over KG toward the end of Game 4. I'm not sure which TNT announcer it was (maybe Doug Collins?), but someone suddenly blurts out 'LEBRON JAMES WITH NO REGARD FOR HUMAN LIFE!!!' I don't know if that's the best or the worst call I've ever heard, but I laughed for about 10 minutes straight." I'm pretty sure that was Kevin Harlan. But yes, the call redefined awesome. Go ahead and listen for yourself.


Update! Jin had a little something to add to this: "My apologies. Apparently it was Kevin Harlan, and after doing a little research, apparently he coined the phrase in fun back when the Timberwolves sucked. I don't know if this is common knowledge or not, but I had never heard it before until now. Quite ironic that it ends up being used for Lebron, against KG though." Indeed it is. It's like 10,000 spoons when all you need is knife...or maybe a song about irony that has nothing to do with actual irony.

The Boston bench: The "Green Team" got outscored 36-17 their Cleveland counterparts, and it would have been even worse without P.J. Brown and his 8 points (4-for-4). The non-Browns scored 9 points on 0-for-10 shooting. I wonder if they accidentally drank some Gatorade after LeBron or something.

ESPN.com: According to The Letters, Boston should have been eliminated from the postseason already. I mean, they just suffered their fifth straight playoff loss. Thanks to Scott B for the head's up.

The Associated Press: This little nugget came from the AP recap of last night's game: "The Cavaliers were awed by James' stuff." Thank you for that, Mr. Tom Withers, AP Sports Writer.

Crazy commentary: There were a couple of items that were unintentionally omitted from Worst of the Weekend because my buddy Statbuster was filling in for me (and he did a kickass job, if I must fluff him myself). The first is the latest Reggie-ism, courtesy of Lipsome123. "I'm sure you just heard him say that 'You don't put Robbert Horry in as a flower dressing.' I love that man." I love him too, but he is no man. He is a god.

The second is from Jimmy P. "During the 4th quarter (I think) of the Lakers/Jazz game on Sunday, as Hubie was talking about the contributions of Matt Harpring and Paul Millsap, he said that both guys help the Jazz greatly by 'banging it on both ends,' which was TMI for me." Personally, I think it was just enough information, but maybe that's just me.

2-Man Weave said...
On the foul that led to LeBron's yo mamma joke, anyone catch Doug Collins talking about how dangerous a play like a wrap-up foul is? What would Doug prefer--that the defender just do the forearm shake and throw the guy into the front row? Pierce did the right thing: fouled, and made sure LeBron didn't get a shot off, even holding him to make sure he didn't fall and get injured.

Anonymous said...
Good for you Gloria.

The Big Three (and really, the whole Celtics team) is now "Gang Green". They are just slower and out of place on offense and defense.

Anonymous said...
Come on, Basketbawful, aren't you going to talk some junk about how terrible Wally Szczerbiak was in this game? I thought he was the crappiest player ever and the Cavs would be better off having kept Larry Hughes?

As for Ray Allen, just remember: "NOBODY fawks with the Jesus (Shuttleworth)..." 4-10 isn't that bad for somebody shooting 3's and getting fouled (5-5fts). In fact, you can't say that somebody had a "bad shooting night" if they score as many or more points as they have shot attempts- that means that they are hitting 3's or getting to the line- I.E. doing their job even if the jumper is off or they're getting flogged in the lane.

I would honestly like to hear your opinion on this: if you score as many or more points as you have field goal attempts, not including FTs, you have had a good shooting night.

LBJ took 20 shots and scored 21- not GREAT, but quite a good game overall.

Truehoop's article aside, don't you think this picture would be good for Man Love? I mean, as much as I hate that people call him King James, KG is all up in his royal jewels.
5/13/2008 12:44 PM

Basketbawful said...
2-man weave -- I think Doug is still sticking up for Michael Jordan circan 1989 against the Bad Boy Pistons. It will never be too late for Doug to kiss Jordan's ass.

hoffman -- I wish my mom had been around this morning to protect me from the little old lady who cut in front of me in the line to the train...

anonymous -- I pick on Wally when he plays badly. He was decent last night. But seriousl, are going to try and tell me that one or two good games makes up for all the crap games he's had since coming to Cleveland? Seriously? It's not like Larry Hughes never scored 15 points for the Cavs...

As for Ray-Ray, I have two things to say. The first of which is that I do NOT consider 4-for-10 a good or efficient night for an all-star-caliber player in a crucial playoff road game. I mean, Allen is making near-max money. He was brought it to come through in big games. And what he did doesn't cut it.

Secondly, part of feeling out a bad night is watching a game. Ray is struggling to even get open shots these days. And considering he's pretty much a shooter and nothing else, it he can't get open looks his usefullness is extremely limited. The best he could do in the fourth quarter was take one leaning, off-balance three-pointer. And he scored zero points in the fourth. That's a $15 million player?
5/13/2008 12:47 PM

Anonymous said...
The level of panic in Celtics fans, and the media regarding the Celtics, is amazing. The home teams are 13-1 in this round, with the only loss being by 1 point. No one is playing well on the round.

LA and Utah is more reminiscent of the Celtics/Cavs. The Lakers blew out the Jazz at home, then lost two close games on the road. I would argue that because Utah barely beat LA at home, but LA blew them out that LA is better.

Detroit and Orlando saw a blowout by Detroit, a close game won by Detroit (both home), a blow out by Orlando at home, and a close win by Detroit on the road. It'll be damn near impossible for the Magic to win three in a row against Detroit, but against, they're playing them better at home than on the road.

And lastly, Cleveland and Boston. The Celtics won a close game (home), then blew them out (home), then got blown out (road), and then lost a close game (it was a 4 point game with like, 2 minutes to go before the Cavs sank the three 3s in a row, road). So who really is better here? We don't know.

Anonymous said...
what do you mean "When the Timberwolves sucked"????

Are we currently in some alternative universe where the Timberwolves no longer suck? I cant remember the last time they didn't suck....
5/13/2008 9:47 PM

Anonymous said...
kevin harlan is good for a lot of lines

RIGHT BETWEEN THE EYES, HE's A FLAME THROWER

found the link for the buckle up for kobe bryant

it gets even better as he says

"KOBE BRYANT JUST SUCKED THE GRAVITY OUT OF THE TARGET CENTER"

apparently kobe bryant is a blackhole according to kevin harlan as that's the only thing I can imagine that sucks gravity
5/14/2008 4:36 AM