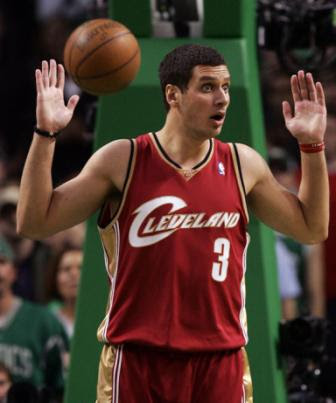 Catch-and-Shoot-22 (kach'-and-shoot'-twen'-te-too') noun. The impossible situation in which a basketball player -- usually a reserve who sees limited action -- requires a certain number of scoring opportunities to establish an offensive rhythm but rarely (if ever) receives them. It's a classic dilemma that can be best described by the following statement: "Player X can't score unless he gets enough shot attempts, but he won't get enough shot attempts if he can't score."

Usage example: Sasha Pavlovic still isn't getting much time off the Cleveland bench, probably because he's stuck in a Catch-and-Shoot-22.

Word history: The term was coined by Phoenix Suns assistant coach Phil Weber, as noted in Jack McCallum's book :07 Seconds or Less: "Further, as with all shooters, [Eddie] House is in a Catch-22. (Or, as Weber observes, it is a Catch-and-Shoot-22 with House.) [House] needs shots to get going, but, if he can't get it going, it's difficult for D'Antoni to leave him in."

Of course, this is a play on the term Catch-22, which was created by Joseph Heller in his novel Catch-22 and describes a false dilemma for which no real choice exists. According to Wikipedia: "The prototypical Catch-22, as formulated by Heller, involves the case of a U.S. Army Air Forces bombardier Yossarian who wishes to be excused from combat flight duty. In order to be excused, he must submit an official medical diagnosis from his squadron's flight surgeon, demonstrating that he is unfit to fly because he is insane. In fact, according to regulations, any sane person would naturally not want to fly combat missions because they are so dangerous. However, by requesting to have one's sanity evaluated, the airman demonstrates that he is in fact sane and therefore is fit to fly because one has to be sane to recognize one's own insanity."

Players like Pavlovic and House get stuck in Catch-and-Shoot-22s all the time. The same thing happened to former journeyman Jim Jackson. Jimmy proved he could score 20 points on any given night. However, although a lot of teams liked his "instant offense" -- 12 teams in total, to be exact -- his employers became increasingly reluctant to give him the shots necessary for that to happen. And eventually, Jackson was Catch-and-Shoot-22'ed out of the league.