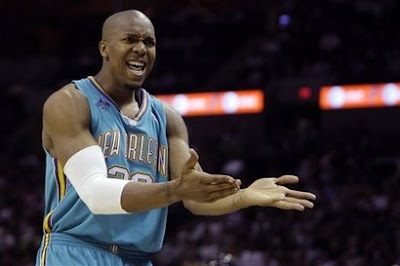 Los Angeles Lakers - missed their opportunity to kick Utah in the Jazz and go up 3-0 on Friday, losing 99-104. Kobe held up his share of the bargain (34 pts, 6 boards, 7 assists), but the rest of the purple people choked up 14 turnovers on 7 assists. Horse blinders or Vaseline hands? I hope it was the blinders.

Dwight Howard - found a way to lose at home to a de-Billupsed Pistons squad on Saturday. The Magic were falling back on their heels and were outscored 46-34 in the second half, losing 89-90. No coincidence that Superman went 3 for 12 and was outscored by the Wonder Twins (aka Jameer Nelson and Maurice Evans, 15 each).

Boston's backcourt - The Celtics inexplicable road stinkage continued Saturday, losing to the Cavs 84-108 on Saturday. Ray Allen and Rajon Rondo suddenly turned into Ron Mercer and Sebastian Telfair. Shuttlesworth went 4-12, and Rajon Rondo had zero assists in 24 minutes. Sam Cassell went 0 for 6 and Tony Allen almost had himself a 4 trillion. And they were collectively destroyed by Wally Szczerbiak and Delonte West (combined 37 pts, 8 asts, 11-21 shooting).

Ben Wallace - complete with ear infection, had his best postseason game Saturday with 9 pts, 9 rebounds, 2 blocks and a made free throw. Who woulda thought Ben's key to success would be an infectious disease? I'm sending that monkey from Outbreak to borrow his toothbrush and cough on his pillow.

James Posey - No frustrating Celtics loss would be complete without a heaping spoonful of unprovoked James Posey thuggery. Where have I seen this before?

Kobe Bryant - The Lakers played the Jazz tough for 48 minutes on Sunday. Unfortunately, the game went into overtime, so the Lakers lost 115-123. Kobe literally hurt his back from carrying his team all night, and scored 33 points on 33 shots. As the old adage goes: the worst shot in the game is the one you let your teammate take. Or something like that.

Ronny Turiaf - I expected an "E-C-Dub! E-C-Dub!" chant to break out after Ronny gave Utah backup Ronnie Price a swinging neckbreaker on Sunday. Unlike Posey, Turiaf had the decency to at least pretend it was a defensive play (albeit after the whistle). Oh my...GAWD!

David West - shot a sickening 4 of 15 from the floor as the Hornets were (insert bee-related pun here) by the Spurs on Sunday 80-100, tying the series 2-2. I wonder if Tim Duncan mockingly tapped him on the cheek, or if Fabricio Oberto applauded his ineptitude? The Spurs have stolen the momentum from the Hornets, which is a bad thing. The Spurs are the Jason Voorhees of the postseason (except slightly whinier and Duncan Face-ier), never consider them dead until you see them die. And never make the mistake of killing their mother.

Labels: Worst of the Weekend

Anonymous said...
please tell me you're ragging on turiaf because of his proximity to kobe... turiaf is so far from the likes of haywood and posey

yeah, i suppose he could have let price walk in for a layup after the foul was called about a second before (on vujacic), and then they could've been facing an and-one situation. if offensive players are allowed continuation, defensive players are allowed to play d on the play in question. the fact that he did indeed foul price 'after' the whistle isn't being disputed. turiaf clearly swipes down AT the ball, the rest of it is simply a playoff foul. sympathy calls are awesome.
5/13/2008 12:05 AM

check the newest lebron james-diss track on youtube from, believe it or not ... our favorite basketball teacher - brian scalabrine

Wild Yams said...
Agree with Tuna. I don't get at all why that call on Turiaf was made. It was just a hard foul and that's it. I would have thought it was questionable if they'd given him a Flagrant 1, but a Flagrant 2? That's BS. He swiped at the ball to try to prevent continuation, he wasn't trying to hurt the guy. I understand the refs having the initial reaction that it must have been extremely severe since Price came up bleeding after hitting his head, but the refs got to examine the video of the play before making their decision so they have no excuse for deciding a Flagrant 2 was the correct decision. I'm so sick of the refs calling these Flagrant fouls on people just because one person happens to land awkwardly. Just because a guy lands weirdly doesn't change how the person fouled him. I think clearly the rumor that refs get intimidated by the Utah crowd is true.

Also, just curious what the people who were claiming "conspiracy" after Games 1 & 2 of the Lakers-Jazz series thought about the huge Utah advantage at the line in Game 4. How does that figure in to the theories that the league is rigging everything for the Lakers?
5/13/2008 10:20 AM

Anonymous said...
Exactly, I was expecting to see the worst of the night Utah Jazz freethrow attempts. You can pencil in the lakers for 45 attempts in games 5 and 7 though. It'd be nice if David Stern actually let the players decide and not prescript this series like the WWE.
5/13/2008 11:46 AM
Post a Comment
<< Home
Subscribe
RSS Feed
Mailing List