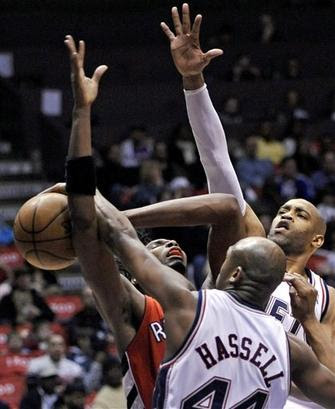 triple-threat negative (trip'-uhl thret neg'-uh-tiv) noun. A three-fold series of problems or obstacles that can (and probably will) cause a team to lose a game.

Word History: The term was coined by Vince Carter after a 104-83 loss to the Cleveland Cavaliers that shattered the New Jersey Net's fragile playoff hopes. "It's tough when you're not hitting shots, not making layups and calls we felt we should have gotten, we weren't getting. It was a triple-threat negative."

Actually, it's entirely apropos that Vinsanity invented this word. I mean, when Vince was with the Raptors, he signed a girmormous contract, sandbagged until Toronto was forced to trade him, and then caught on fire (at the time, anyway) for his new team. If that's not a triple-threat negative, I don't know what is.

Jim in KFalls said...
Off Topic:

My suggestion for "Thursday afternoon Man Love" - is the caption from the Clay Bennet e-mails directed to David Stern, that Henry Abbott quotes on True Hoop:

I am concerned that you may feel I have betrayed your trust. David you know how I feel about our relationship both personally and professionally. You are among a very few, notwithstanding our relative brief actual physical time together that have significantly affected my life. I view you as a role model as an extraordinarily gifted executive, a deep and compassionate thinker, and a person with a rare and unique charisma that brings out the best in everyone you touch. You are just one of my favorite people on earth and I so cherish our relationship Sonics business aside. I would never breach your trust.
4/10/2008 12:25 PM

Tonewise said...
wow.
You know its tough for me, being a raps fan on how i really feel about VC (half man half bandage)

The ACC will forever be the house that Vince built, thats cool. And in a lot of ways I sometimes wonder if basketball in canada would still be around if he hadn't stepped up and signed that contract with the raps when he did. Now to be fair to MLSE and raps management they have taken the brand well beyond VC and I think its clear that TO will be around in the NBA for a long long time... but I still always wonder what would of happened if he didn't stick around for that contract... or if he pulled a Stevie Franchise and stuck his lip out and boycotted the team...

so in some ways I cant help but have a lot of respect for what VC did for "my" team... but then when the reality of what happens comes crashing back upon me...

I don't care if he is the greatest dunker of all time... 82 games a year, one dunk contest a year... HE FLAT OUT QUIT ON A TEAM, maybe the worst flop on a team of all time? I know others have flat out quit on a team, but who else came back with another team in the same season so dominant? (franchise shouldn't count somehow since he warned everyone what would happen... even if that makes it worse i don't know...)

I guess Ill stop my rant now, I normally dont try to write a novel in the comment section on other ppls pages... but well when it comes to VC clearly I have mixed feelings.

The guy was amazing, built TO hoops to a viable enterprise in the NBA and for that I will forever be thankful...