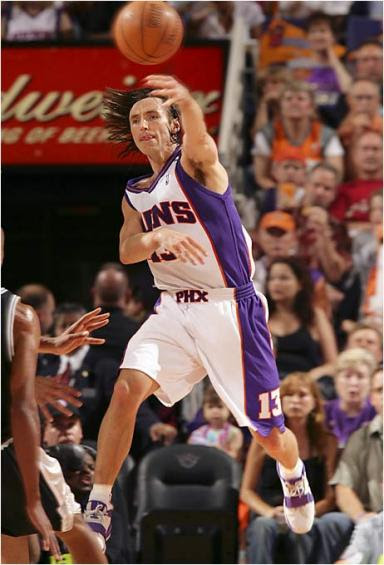 satellite (sat'-uh-lit') verb, -lited, -liting. To very quickly pass the ball inbounds or downcourt in order to initiate a fast break. This is a move that, in many cases, catches the opposing team by surprise.

Usage example: You can bet the Jazz will be ready next time a team satellites the ball against them in an end-of-game situation. Or Jerry Sloan will kill them all.

Word history: The term was coined by Kyle Korver after Utah's 97-94 loss to the Dallas Mavericks. Brief end-of-game recap: Deron Williams had just banked in a three-pointer to tie the score with about six seconds left. Utah expected Dallas to call timeout...only the Mavs didn't have one. So Jason Kidd immediately inbounded the ball, catching the Jazz totally off guard. Dallas ran the ball downcourt, Dirk Nowitzki popped a clutch three, and Utah lost.

After the game, Korver was still trying to make sense of what had happened. "They were kind of yelling at first. I think, maybe, I don't know if they were yelling for a timeout or not. But then Jason (Kidd) satellited it, and we weren't back, and we should have been, and they got a good look, and he made it."

And that, kids, is how a new Word of the Day is born. Many thanks to Basketbawful reader Brad for the find.

Random sitenote: This isn't the first time Deron Williams hit a big shot in the closing seconds only to be satellited by a pass that won the game. Seriously. It once happened against the Knicks, of all teams. Thanks to Scrumtrulescent for the history lesson. And thanks to Sturla, who provided the video.

stephanie g said...
Correct me if I'm wrong but I'm pretty sure the Mavs had 0 time outs. They had to do what they did, which made the Jazz's defensive bewilderment all the more confusing. Maybe it was the effect where someone hits a big shot and everyone else on the team stands around feeling good and celebrating while the other team casually goes and dunks it.

Speaking of basketbawfulness there's a huge game tonight: LA vs. New Orleans. Mamba vs. CP3. Whoever wins will probably end up with the MVP. They're fighting for the first seed. Yet ESPN, in their collective winsdom, will be showing us...Chicago and Cavs for the 18th time. Is there one or two people I can fantasize about stabbing in the face? I don't feel satisfied just hating a faceless, monolithic organization. Gives me some names.
4/11/2008 1:10 PM

Anonymous said...
I might be wrong, but I'm almost positive "satellite" was already a term before Korver used it. But not in the way he means. It is an outlet pass, but one that is lobbed and subsequently hangs up there "like a satellite". Its most often used when a long pass is picked off. Kidd's, on the other hand, was more of a bullet pass as that shit was flying down the damn court. It is unique that he made it into a verb though.
4/11/2008 3:44 PM

Did you just say Dirk hit a clutch three? Nooo...not you! Aren't you the one who wrote just a few weeks ago about "Dirk Nowitzki's Unclutchness"?

Anonymous said...
I think the Mavs learned this play from the Warriors:

Anonymous said...
As a Carolina fan I hate to say this but I believe this has been orginated by Coach K's Duke teams. It has driven me crazy for years that more teams don't do it but apparently it's catching on.
4/12/2008 1:57 AM

Anonymous said...
It should be noted that D-Will himself satellited the Cavs earlier this season, and it's a tactic the Jazz have been known to use when the situation arises.

I know this would seem to mean that the Jazz should have been more ready for it, but I bet it's a lot harder to defend against in last-shot situations than people think.
4/12/2008 10:44 AM

I never even thought about my initials being the same as LeBron's! Let me be quick to assure you I have no illusions of Bron-Bron grandeur when it comes to my "skilz." In fact, I'm pretty sure LeBron could block my shot by simply standing in front of me - I wouldn't even be able to see the rim!

As for Matt picking on Dirk, well... Look, I know he's right about Dirk's *past*, I'm just out here keeping hope alive!

~LJ (aka Not LeBron)

Anonymous said...
Oh - I like your new pic at top!

Anonymous said...
I prefer to think that Kyle Korver birthed the verb other than on previous occasions and I suggest that this maybe a "satelite", but to take a leaf out of the Velvet Underground's book and push this envelop a slight bit further and crown it a "satellite of love" when this play works with only the inbounder and the receiver touching the ball and scoring to win the game? Either that or when and alleyop pass happens to win the game and works? Do I ask too much to ask? I'm from Australia and our national basketball league is shutting down and going so badly we wish we had David Stern, and our biggest latest export is Jawai who went to the Craptors and, I assume due to the shock of how bad they are has developed heart issues and hasn't played a game after being a MVP rookie last year here.