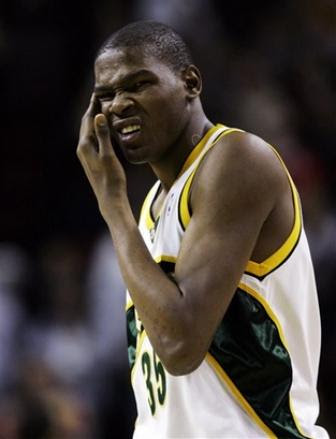 With the NBA regular season nearing it's end, we're down to our last couple of chances to provide you with another round or two of our nearly meaningless reverse power rankings. First one to suck worst wins! This week I'm taking the "ultra-competitive" Western Conference while the Hardwooders get the "slightly less competitive" Eastern Conference.

1. Seattle: Hmm. It looks like this team is going to end up with the worst record in franchise history and its longest playoff drought in over 30 years. And they might not even be the "SuperSonics" much longer. I'm not sure how things could get much worse, short of the ground opening up and swallowing Kevin Durant mid-jumper. Uh, somebody better check the ground around Kevin Durant, and fast.

Hardwood Paroxysm says: Hey, look! Kevin Durant's playing better! That should make up for the abysmal season, the team dysfunction, the firesale of talent, and the inescapable move of the franchise from it's storied home to the Midwest. Yup. Yay, Kevin Durant! Whoops.

2. L.A. Clippers: They might be ranked "only" second here, but the Clippers are still the number one team…for me to go number two on!

Hardwood Paroxysm says: That dark shape you see moving under the water is the Clippers restocking their roster, freeing up cap space and getting ready to unleash a very pissed off Elton Brand on the world. If they manage to do well in the lottery...watch out. Hold on, haven't we been saying that about the Clippers for the last decade?

3. Memphis: Here is a real and unedited quote from the Grizzlies' team report: "Memphis continues to give admirable effort every night is because it has players, coaches and a general manager that realize building for the future starts now." That's the same GM who traded Pau Gasol for Kwame Brown, right? Just checking. And no, I'm not giving them a reprieve just because they won a one-on-five game against Kobe Bryant last weekend.

Hardwood Paroxysm says: What? Complete rebuilding plan? Laughingstock of the league? Need the draft pick more than anything? Let's win some games, fellas! The Memphis Grizzlies. A legacy of excellence...in something.

4. Minnesota: Don't look now, but the Timberwolves have won four of their last seven games. You didn't look, did you? Good. Then you don't know that those wins came against the Clippers, Grizzlies, Knicks, and the "can't play on the road" Jazz. Oops.

Hardwood Paroxysm says: That's funny. I didn't know Kevin McHale was so much of a Kansas State fan. What? He's not? Then why is he wearing that jersey? Oooooooooooh...

5. Sacramento: They recently ended a three-game losing streak with a one-point overtime win over the Memphis Grizzlies. Need I say more? And if you want to know how dispirited this team really is, think about this: When was the last time you read about Ron Artest doing and/or saying something crazy? Exactly. Update: Basketbawful reader Carlo just informed me that Ron-Ron recently said: "You take away Mikki, and we're not winning. Not at all." Okay. I'll admit that's a little crazy. But it wasn't not full-blown Artestean explosion. You know? To me, it's not Ron-Ron if he hasn't demanded a trade for no reason or maybe eaten somebody.

Hardwood Paroxysm says: I really hope the elevators at Arco play "Stuck In The Middle With You" over and over again.

6. Portland: All hail the Vanilla Godzilla and his amazing 26-rebound game! If you're done hailing now, here's a painful reality check: Brandon Roy is likely out for the season and their next four games are against the Lakers, Rockets, Spurs, and the Lakers again. In other words, they're going to need a miracle to finish the season with a winning record. Which means it might be time for the farting preacher.

Hardwood Paroxysm says: The real reason they're pissed off about Oden in 24 Hour Fitness? He outplayed his team this week.

7. Dallas: Danger Will Robinson! Danger! Danger! From 67-wins last season to out of the playoffs this season? It sure looks it's going to end up that way. And to add insult to injury, Mark Cuban has officially lost his one-billionaire war against the blogging menace. I never realized it could suck so much to be so rich.

Hardwood Paroxysm says: (Warning! Obligatory "Where X Happens" joke incoming!) The Dallas Mavericks: Where "That Didn't Work Out Exactly As We Planned" Happens.

8. Denver: Memo to the Nuggets: It's not gonna happen, guys. Sorry. (Note to self: If it does happen, come back and edit this entry to say it's totally gonna happen.)

Hardwood Paroxysm says: Look, it's fine, they can make the playoffs with Dirk hurt. That's all well and good. But they're a broom magnet. You know it. I know it. The guy that owns firegeorgekarl.com knows it.

9. Golden State: There's a pretty rough scrum on the bottom rung of the Western Conference playoff ladder. As of this moment, the Warriors are on the outside looking in. On the bright side, they get another shot at Dallas and Denver in their final nine games. So basically, the West's final playoff spot is theirs to lose, and so long as Captain Jack doesn't lose his mind, they won't. Unless they do. Crap. This Western Conference race is driving me nuts.

Hardwood Paroxysm says: They should change their names to the Golden State "You Don't Want To Play Us In The First Round And You Know It"s.

10. Houston: From first to sixth in a couple weeks. Anybody else smell burning brakes? I almost dropped these guys even further after T-Mac's "I imposed my will on the Minnesota Timberwolves" speech.

Hardwood Paroxysm says: Anybody remember them winning 22 in a row? Anybody? No, Mrs. Alston, you don't count.

11. Utah: They're the Hulk at home and Dr. David Banner on the road. And I'm betting that means their season ends with them walking down the road to that sad piano music...

Hardwood Paroxysm says: The Jazz recently hired a team of mathematical experts to figure out how many games they need to win to play every game in the playoffs at home. All of them. Results are not yet clear.

12. Phoenix: I refuse to read too much into those back-to-back losses against Detroit and Boston last week. Mostly because I love the Suns and, of course, I can't read. Seriously. I just dictate all this stuff.

Hardwood Paroxysm says: Uh-oh. We made it angry.

13. L.A. Lakers: Just when you start to think they can’t be beat with or without Gasol, Jason Richardson uses Kobe like a prop and the Lakers drop a homecourt "gimmie" to the Charlotte Bobcats, then Kobe decides to go 1-on-5 and they lose to Memphis.

Hardwood Paroxysm says: The deafening silence across Laker Nation after back to back losses to the Bobcats and Grizzlies created a small rift in the space-time continuum. Lost into the vacuum of nothingness was Luke Walton's swagger and Sasha Vujacic's developing manhood.

14. San Antonio: Just like that old man who sits on his porch all day screaming at those damn kids to get the hell off his lawn, these guys just won't go away. Ever.

15. New Orleans: In honor of the fact that the Hornets currently have the best record in an unbelievably competitive Western Conference – and let's face it, nobody saw that one coming – I'm rearranging the alphabet to begin C-P-M-V-P.

slyguy183 said...
Word, I agree 100% with your ranking. Some bright spots in the worst ofs: Kevin Durant is clicking right now. In the beginning of the season I thought he should be shooting even more because he's the only one on the team with any real potential. 40 shots a night for him would have been OK with me.

Also, Al Thornton looks like he might be for real. He has balls and can score like a beast for a rookie. I was shocked to see he dropped 39 on Memphis.

And who would have thought someone named Gay would be so good. If he keeps this up, the word gay may og from being a vulgar insult to major props.

"Damn that test was mad gay!"

"Yea I know, it had mad skills and really owned us."

Somehow, I think I'd rather be any of those bottom 5 teams than Dallas at this point. They're a team stuck in basketball purgatory right now, not good enough to make an impact in the playoffs but not bad enough that their fans expect losing. Can they rebuild with all that money on their roster? Can they contend for a title with Kidd, Dampier, Terry - all overpaid pseudostars? I dunno...
3/31/2008 9:49 AM

Hi my name is Mr. Paul, I own ppl in tight races down the stretch.

Somebody tell Ron to switch his name, he's fucking up my google stats, I'm trying to be MVP of the world(USA) - Kobe can have basketball.

Anonymous said...
when I heard KD was playing SG I thought....WHAT THE HELL???
whats wrong with this coach/gm??
and I still think that
but that gives him no excuse to shoot 40 I'm not fine with that if you want him to develop a proper overall offensive game you'll need him to be able to pass too lol and playing sg doesn't help develop a proper rebounding game either he has the length to do a lot of putbacks just needs to strength

he needs the chris bosh rookie year treatment
just throw him in PF role and let him fend for himself no need to baby him
3/31/2008 10:43 AM

Wild Yams said...
Dallas is definitely screwed. I don't know if they really had a championship window prior to the Kidd trade (I didn't see them as serious contenders), but whatever window they had was slammed shut when they traded for Kidd. Now if they don't win right away, their future entails a few more failed championship attempts followed by a period of rebuilding. If they don't make the playoffs this year they need to blow it up down there in Dallas and start over, cause otherwise it's just gonna take them a couple years before they get to that point anyway, and it's a virtual certainty they're not going to win with the pieces they have.
3/31/2008 10:50 AM

"You take away Mikki, and we're not winning. Not at all."

That's not crazy to you?