This is the cover of the January 15, 1975 edition of Sports Illustrated, featuring none other than Paul Douglas Collins, who at the time was considered one of the best college basketball players in the country. His speed and ball-handling abilities earned him nicknames like The Torpedo Man, The Benton Blur (he played high school ball in Benton, Illinois), and Doug the Jet, and his scoring prowess caused SI to say that "...he may turn out to be Jerry West all over again...."

Doug's pro career didn't quite match that of The Logo's -- okay, it never even came close -- and he eventually went on to become a head coach who cried a lot and, as Wikipedia puts it, "is best known as being the coach who could not win an NBA title with Michael Jordan in his prime." But thanks to Sports Illustrated picture editor George J. Bloodgood, Doug gave the world enough dead sexy to fuel our national libido forever. 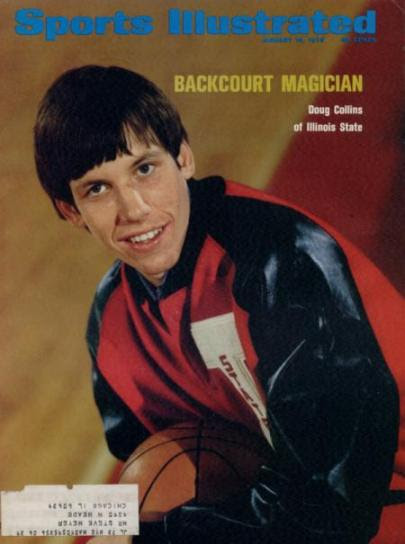 80's NBA said...
The first time I knew Collins was a pansy was during the 1987 Eastern Conference Finals. Yes, I'd always seen clips of him complaining and had read about it, but this is when I first heard it myself.

He was the color man for TBS (they showed most of the playoff games back then). At the end of Game 5 (the Bird Steal), he kept saying "What a horrible mistake by Detroit!" (which it was), but you could tell he was disappointed. There were other various comments throughout that game I can't remember off-hand. Not once did he say "great play by Bird." This was probably because his Bulls got there asses handed to them for the second year in a row by the Celtics in the first round. But he couldn't just do the game with objective announcing.

This showed up again in 2000 when he was blatently cheering for the Lakers. If any of you remember those broadcasts, you'll recall he had a serious double case of Man Love for both Shaq and Show-Be Bryant. Does anyone else remember that? It was even worse than when Billy Packer cheers for "Duke University" every year in the NCAA Tourney.

Anyway, I'm just glad ol' Dougie boy was on the worst team ever - the '73 Sixers team that won only 9 games. Good.

Anonymous said...
Haha.. Doug Collins is going to be the replacement for the Bucks GM...