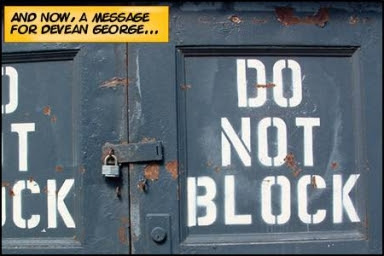 Devean George: Well, nobody saw that one coming, huh? The Mavericks pull off a blockbuster trade for prodigal son Jason Kidd, only to have the deal blocked by one Devean Jamar George. George has a "virtual no-trade clause" that allowed him to reject the trade because he's on a one-year contract and would lose his "Early Bird" rights. That's a stipulation that would allow Dallas -- and only Dallas -- to go over the salary cap to sign him. Basically, it would maximize his money should Mark Cuban decide, after the season, that he wants to go balls out to sign George to another, more lucrative contract.

Yeah. That wasn't going to happen anyway, and it sure as hell isn't going to happen now. Captain Cockblock has played in only 27 of the Mavs' 52 games, partly due to injury, and partly due to the fact that he's not any good. He's averaging 3.6 PPG, 2.6 RPG, and he's shooting 36.5 percent from the field. He has a PER of 8.9, which -- according to John Hollinger's reference guide -- falls somewhere between "definitely renting" and "on the next plane to Yakima."

Well, he may suck -- and he really, really does -- but HEEEEEE HAAAAAS THE POWEEEEERRRR!!! At least, the power to crush the hopes and dreams of Jason Kidd, the Mavericks, and everybody who was totally juiced to see how this trade was going affect the battle of powers in the Western Conference.

My gut tells me this isn't over. It can't be. To provide you with a point of reference for George's relative importance in this deal, he's making $2,369,111 this season. Kidd is making $19,728,000. In a trade this size, there has to be a way around $2 million. Doesn't there? And surely somebody is going to talk sense into George, because those "Early Bird" rights aren't going to do a damn thing for him when Dallas cuts him loose after the season.

As a sidebar to this story, Avery Johnson was forced -- due to an injury to Josh Howard -- to start George last night against the Trailblazers, and George responded to all the angry catcalls from the Dallas crowd by scoring zero points on 0-for-11 shooting in 33 minutes. Way to silence your critics, Devean.

Atlanta Hawks: Memo to the Hawks: Losing to the Charlotte Bobcats will not improve your chances of making the playoffs. And here's another reality check for the dirty birds: You have 21 wins, and the 'Cats have 19.

Othella Harrington: Did you know that Harrington was one of the greatest rebounders in the history of prep basketball? It's true. Harrington was a top 5 player his senior year, and was MVP of the Dapper Dan and McDonald's all-star game (where he had over 20 rebounds). But last night's four trillion is a sure sign that his glory days are far, far behind him.

Maurice Evans: If there's a wink link in the Magic's daisy chain, it's their backcourt. And that weakness was on display last night, as Evans scored 2 points on 1-for-8 shooting. You know, starting 2-guards are supposed to score. That's what they do. But Evans is averaging 7.6 PPG. And it's not like he's much of a playmaker, either (1.1. APG).

Damon Stoudamire: Quite a boost he's given the Spurs, eh? In 18 minutes against the Cavs, Mighty Mouse scored zero points (0-for-4) to go along with 3 rebounds and 3 assists. You know he must be pretty bad if he can't unseat starting point guard...

Ira Newble: It's not his fault. He was forced into the starter's role for the Cavs due mainly to a variety of injuries to guys like Boobie Gibson and Sasha Pavlowhatever. But I bet his zero-point, 1 assist performance against San Antonio made Lebron want to strangle him.

Lawrence Frank: Before he could find out about Devean George's historic cock block, Frank said of the Kidd trade, "The bottom line is that it was time for both parties to move on." Stat curse! How's Frank gonna spin that one if Kidd ends up back in New Jersey?

Vince Carter: The 79 Million Dollar Man's season of sleepwalking continued, as he notched a soporific 15 points on 5-for-15 shooting. But the best part was his postgame comment: "You would think that we were already on vacation in the first half." That's some straight up Vinsanity. But not the good kind.

Darrick Martin: It's nice the kid got some PT in a blowout, but it's not so nice that he scored a three trillion.

New York Knicks: The Celtics were already without Kevin Garnett and Kendrick Perkins, and then they lost Brian Scalabrine (pulled groin) and Big Baby Davis (twisted knee). That left Boston with, what, five or six healthy players? Fortunately for the Green and White, the Knicks suck.

Marquis Daniels: Indiana's new starting point guard scored 3 points (1-for-9) and had 1 lonely assist in 32 minutes of whatever the opposite of "action" is.

The Pacers' shooting: Daniels wasn't the only Pacer whose gun was jammed. The team shot 31 percent for the game, and almost everybody was guilty: Danny Granger (3-for-9), Jeff Foster (0-for-1), Mike Dunleavy Jr. (3-for-9), Troy Murphy (3-for-9), Andre Owens (3-for-9), Kareem Rush (3-for-7), and Shawne Williams (1-for-10). It's like they were shooting on one of those outdoor hoops where the rim is bent sideways and pointing upward.

Luke Walton: Our boy Luke is the odd man out in the Lakers resurgence. Last night he scored 1 point (0-for-3) in a game in which his team scored 117. And I'm sure you'll agree with me when I say that's terrrrrrrrible!

John Salmons: You know, it wasn't very long ago that he was scoring 18 a game, but it sure seems like a long time ago. Last night's line: zero point (0-for-4) and zero everything else in 20 minutes.

Bonzi Wells: His role on the Rockets is defined as "scorer." Last night, he played the role of "loser" with zero points on 0-for-4 shooting.

Suns and Warriors defense: Last night, neither team played any. The Suns scored 118 points on 52 percent shooting and lost. That's because the Golden Staters hit for 120 on 54 percent shooting. Well, that and...

Steve Nash: He had 20 points and 12 assists, but he also had a case of the butter fingers (7 turnovers). Turns out that whole "taking care of the ball" thing is pretty important.

Jarron Collins and C.J. Miles: Utah's 11th and 12th men had identical numbers last night: 49 seconds and zero-for-everything. Did they decided to have a suck-off and not tell anybody?

Quinton Ross: The Clippers' guard-forward out of Southern Methodist falls into our newest category of "Guys Who Play Less Than A Minute." He got 30 seconds of PT against the Wizards and, of course, did nothing.

More, more, more!! You know you want more of me...so go get some! I promise plenty of Superbad references...

It seems like that should somehow be a staple term in the everyday world bawfulball.

Anonymous said...
that devean george 0-11 was some sweet basketbawful karma!

Babyshoes said...
I'd like to thank Deavan George for being a big enough douche that my Blazers can get flattened by 20 in Dallas and the only thing Basketbawful mentions about the game is George's "performance." It is a charmed season in Portland in more ways than one.
2/14/2008 1:08 PM

Basketbawful said...
optimus - Dude, I did not see that game. I wish I had. I honestly thought there was no way George was playing last night. I didn't even bother to TiVo it.

B-Will said...
I know this isn't the case, but it would be hella funny if Devean George was really blocking the trade because he thinks the trade sucks. That would be an ultimate taking one for the team.
2/14/2008 4:50 PM

Anonymous said...
Can we start the conspiracy theorizing about the Devean George situation?

I mean, these are the basic explanations for Devean the Cockblocker:

1- That ludicrous "early Bird" stuff about him getting more money in the free agent market.

2- Devean trying to screw the Dallas management out of spite.

None of this seems to gel. Here's my Grassy Knol theory:

3- Devean's agent is telling him to hold still because he has a quid-pro-quo with some other team.

Meaning, Mark Bartelstein is blocking this as a favor to another team's front office. Who'd be behind this?

I say either LA or San Antonio. Those teams would stand to lose most from the Kidd-powered Mavs(and Phoenix - but I don't think Steve Kerr's as devious yet as the Lakers management or Darth Popovitch).

Word of the Day
Previous Posts
Worst of the Night: February 12, 2008
T-Mac's Guide to All-Star Game Hooky
Powerless Rankings: Eastern Conference
Defensive stancing with Michael Jordan
If a trade is demanded in New Jersey, does it make...
The Phone Call (and Worst of the Night)
Worst of the Night, and more thoughts on Shaq to P...
Mark my words: Shaq will be the right move
Worst of the Ni...Shaq to Phoenix?!
While you were busy dreading a Lakers 39-game win ...