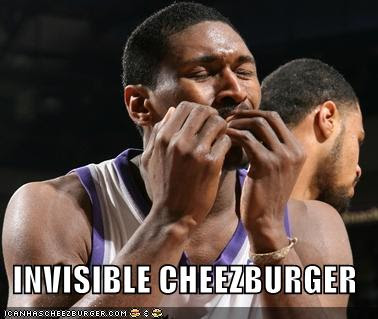 Grizzlies owner Michael Heisley has basically blamed the Pau Gasol giveaway on the Chicago Bulls. The beef is that cheapskate GM John Paxson refused to make a highball offer on Pau to help inflate his value. The Nets had a similar problem when they dealt Jason Collins.

Timberwolves insiders are concerned that Kevin Garnett may no-show his coming appearance on Friday. In the meantime, Kevin incarnate Al Jefferson drops 29 and 15 over the last 5 games but still gets the Fake Shemp treatment.

Ron Artest made an underhanded trade request by insisting that the Kings are better without him. This is in no way related to Brad Miller being mortally wounded by a sink full of dirty dishes.

The fine folks at RedsArmy.com believe that Ben Wallace would have been a better fit for the Lakers than Pau Gasol. While watching LA spend $15 million a year for a backup to Ronny Turiaf would have pleased me to no end, the cost of that is seeing Kwame Brown in a Bulls jersey. Ugh.

Jesse said...
I'm going to bed right now, but I want two things when I wake up BB.

1. I want this Shaq for Marion nonsense to all be some elaborate hoax.

2. I want someone to explain WTF anyone was thinking.

Anonymous said...
SHAAQ OMG argh *cut off his throat in disbelief that the Suns might actually be trading for a giant dead body (which doesn't even fit in the Mike D-system which in turn overloads starters with big minutes are you kidding me Shaq is going to play 35 min every night oh god bless James Joyce and his stream of consciousness) what the hell is passing through Steve Kerr's head WTH*
2/06/2008 5:36 AM

Unknown said...
Jess, thats not D'Antoni doing this. Mike is WAY too smart try to grab The Big Geriatric and incorporate him into the run'n'gun. This trade has Sarver written all over it... Sarver has been trying to dump Shawn ever since he got there anyway.
2/06/2008 9:18 AM

Anonymous said...
shrugz, at least the webber deal was for the vet minimum and prorated at that. jerry buss wouldn't shell out for a 3 year, 90 mill extension that shaq wanted with la - 20 mill per for the next two makes no sense whatsoever, other than a making a middle-finger statement to dallas