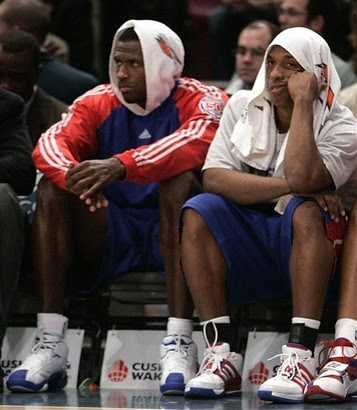 For the rest of the regular season, Basketbawful and Hardwood Paroxysm will be teaming up to give you a weekly ranking of which teams are doing their level best to be the absolute worst in the league. This week, we're taking the East, while the Hardwood Boys are taking the West.

1. Miami: They've lost 10 games in a row. Shaq returned to practice and nobody cares. Pat Riley is trying to get out of Dodge, but the team owner won't let him. Speaking of Riles, he's begging the media to name Shaq to the All-star Game. Not only is Ricky Davis the team's second-leading scorer on the season, Mark Blount led the Heat in scoring over the weekend. That's as close to rock bottom as a team can get. I can't even describe the Heat in basketball terms anymore. The best I can come up with is: This team reminds me of a sweaty armpit somebody covered in refried beans and cooked in the microwave for 15 minutes.

Hardwood Paroxysm says: "The team with two starters held scoreless, a GM/Coach who lost a sexual harassment suit and lost the confidence of his owner, and who's biggest star is dreaming about Italy, yeah, they're still better than you. Congratulations, Miami, you're negative basketball."

2. New York: At least some people are shocked, surprised, and disappointed at the Heats' fall from grace. Nobody is surprised at how much the Knicks suck, unless you count Isiah Thomas, and you don't. Isiah's screwed up the Knicks so badly that I keep expecting a supercomputer from the future to send back robot warriors to destroy him.

Hardwood Paroxysm says: "Their position here is really cemented by their consistency. Nary a week goes by without a negative quote, an embarrassing loss, or a scathing review in the Post. Congratulations, New York, you're the anti-Spurs."

3. Charlotte: The Bobcats are working hard to keep Michael Jordan's legacy of mismanaging teams intact. I mean, Adam Morrison (third overall draft pick) and Jason Richardson (four years, $50 million contract)? That's the MJ we know and love. It's like the 2001-02 Washington Wizards all over again!

Hardwood Paroxysm says: "Charlotte comes in this spot despite the recent success against the top teams in the league, including a win over the Celtics and overtime losses to the Cavs and Pistons, because they're managing a fantastic balance between narrowly losing to good teams and horrifically losing to terrible teams. The dreaded 'ass2ass' performance."

4. Philadelpha: Let me be clear about this -- Philly's chances of being worst in the East, and maybe the league, took a serious hit when they fired Billy King, who was possibly the third worst GM in the league (behind Isiah and Kevin McHale).

Hardwood Paroxysm says: "We likeda Iggy. We no likey da Dalembert. This team gets some strength in these rankings thanks to the gaping holes in their lineup, compounded by a fantastic 6 game losing streak. The Sixers are one injury away from really moving up in these rankings."

5. Milwaukee: This team has over $40 million in salary tied up between Michael Redd, Bobby Simmons, and Maurice Williams. All three of those guys are on the books through 2009-10, and Williams is signed through 2012-13! So Milwaukee promises to be mediocre at best, and really lousy at worst, for years to come! That's some forward thinking by the Bucks brass.

Hardwood Paroxysm says: "The Bucks are kept down by their playing in the Eastern Conference, and the limitations that come with abject pity. With improved play by Charlie Bell, they're losing votes for 'Worst Offseason Acquisition' to the Knicks, but with Yi hitting the proverbial wall, they're upside is high for the rest of the season."

6. Indiana: Their "best" and highest paid player -- Jermaine O'Neal -- can't even play back-to-back games. The status of the Pacers' big man is best summed up by reader Dave: "I have officially renamed the Pacers' big money as 'The Drain O'Neal'. All he does is flush money and stats down the toilet. It's a dark year for Pacers fans." Add in the fact that the Pacers best players are, in fact, Jamaal Tinsley (who can't stay healthy) and Mike Dunleavy Jr. (who's Mike Dunleavy Jr.), and the Pacers are guaranteed to be bad.

Hardwood Paroxysm says: "Mike Dunleavy is their leading scorer. Think about that."

7. Chicago: In a rare showing of team unity, the Bulls players voted to bench Joakim Noah and then celebrated their newfound cohesiveness by getting blasted by the Hawks. Impressive.

Hardwood Paroxysm says: "Boy, firing Skiles really saved the season, huh? The meteoric collapse from last season to now is an impressive feat. This team needs to be wary, though. Any trade that would solve their lineup issues could shoot them back."

8. New Jersey: Once the Nets decided to give Vince Carter a 5-year, $79 million contract, they virtually guaranteed that he'd never care about basketball again. Mind you, he's supposed to be their go-to scorer. He's like the lead weight dragging this team up in our rankings.

Hardwood Paroxysm says: "The real wild-card in the RPR. This team could end up as high as the 4 seed, or as low as a lottery pick. Of course, Vince Carter's douchebaggery is always good for some negative momentum."

9. Toronto: Their three-game winning streak, which included last night's double-overtime win against the red-hot Blazers, cost the Raptors a higher ranking. But they still overpaid for Jason Kapono in the off-season, so there's still hope.

Hardwood Paroxysm says: "The Raptors are in a significant slump right now, and that's helping them in these rankings. They're not only not getting surprise wins over teams that are better than them, but they're also periodically losing to teams that are worse than they are. But with Bosh throwing down monster games since his All-Star video, they're not likely to move up any time soon."

10. Atlanta: At a mere one game under .500, this is the best Hawks team since Dikembe Mutumbo was wearing the red and whatever other color they have. I guess that's what happens after a decade's worth of lottery picks. But make no mistake: This is still the Atlanta Hawks we're talking about. I expect worse things from them in the very near future.

Hardwood Paroxysm says: "Atlanta's finally failed to be terrible despite their considerable talent. It's the end of an era, really. Al Horford is doing the little things this team's always needed, and with Josh Smith making the leap, these team may be headed for legitimate contention."

11. Washington: Hey, weren't the Wizards supposed to fall apart when Gilbert Arenas went down? I had high -- and by "high" I mean "low" -- expectations for these guys. I did not expect them to be above .500, nor did I expect them to beat Boston while Kevin Garnett was still breathing. Well, there's still a chance that Gil will be a chemistry buster when he finally returns.

12. Cleveland: This team has exactly one player who isn't garbage. Unfortunately, that player is Lebron James, so this team can't be bad enough to get better, but won't be good enough to not be really bad. They're kind of in basketball limbo.

Hardwood Paroxysm says: "We'll wait on this team. They may be the worst third-best team in the league, but with 7 of their last 10 wins, we can't reward them with a higher ranking. No matter how useless Larry Hughes is."

13. Orlando: They've defied me by being way better than I could have imagined, and, in some respects, way better than they have any right to be. I mean, they're paying Rashard Lewis so much money he could by a Third World country on eBay. That's going to come back to haunt them, I just know it.

Hardwood Paroxysm says: "The only way Orlando goes up in these ranking is if Dwight Howard gets injured. Which he won't. Because he's invincible. Plus, he's got the son of man-child to think about now."

14. Boston: Well, it's official -- the shine's off the apple. They've lost two out of three. Not to the Spurs or Suns, mind you, but to the Bobcats and Wizards. That's a bad week no matter who you are.

Hardwood Paroxysm: "Oh, how the mighty have fallen. With Boston losing 2 of its last 3, it's pretty obvious they're falling apart. Yup. Wheels totally coming off. Complete disaster. Please don't hurt us."

15. Detroit: Oh, those sneaky Pistons. They must have sensed we had them last in our rankings and responded by scoring only 65 points and getting routed by the lowly Knicks. Since it was the last game of a four-game road trip, and their fourth game in five nights, we're giving Detroit a mulligan and keeping them right where they are. For now.

Hardwood Paroxysm: "An absolute pathetic attempt by the Pistons. Yes, they lost to the Celtics. But then they go out and stomp the Spurs. On the road. It's clear this team is just not motivated to move up in these rankings."

Basketbawful said...
al -- My day was ruined yesterday. First when the Colts lost to Billy Volek and the Chargers, and second when Hardwood Paroxysm sent me their Powerless Rankings, which had the Lakers at 15...which is like them being number 1...and I couldn't disagree.

On the bright side, Bynum got hurt last night, and their upcoming schedule gets tough: Home games versus Phoenix and Denver, and road games versus San Antonio, Dallas, and Detroit. THEN they have a killer February: 12 road games (including an 8-game trip) and only three home games.
1/14/2008 11:45 AM

Anonymous said...
"The team with two starters held scoreless, a GM/Coach who lost a sexual harassment suit and lost the confidence of his owner, and who's biggest star is dreaming about Italy, yeah, they're still better than you. Congratulations, Miami, you're negative basketball."

Anonymous said...
The Lakers are just going to have to steal the Pistons chances of getting Chris Webber... article coming up on what can be done to improve the team while Andrew Bynum is down, check out www.laballtalk.com
1/15/2008 2:38 AM
Post a Comment
<< Home
Subscribe
RSS Feed
Mailing List