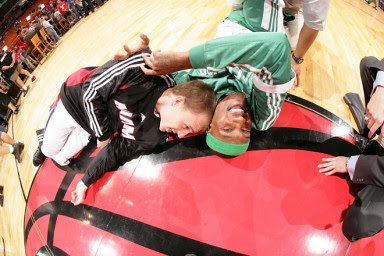 Kris Humphries: The former Golden Gopher notched a one trillion in Toronto's 91-82 victory over Cleveland.

Philly's three-point shooting: The 76ers managed to eke out an 85-84 win over the Wizards, but the backboards paid a terrible, terrible price: Philly shot 0-14 from beyond the arc. Andre Iguodala -- who shot 3-19 -- was 0-6 from three.

Milwaukee Bucks: The Knicks were coming off a beating of historic proportions in which they had all given up on their coach and themselves. The Bucks were coming off a full day's rest and promptly built a 17-point lead. I'm sure you know where this is going: New York edged Milwaukee 91-88 by outscoring the Bucks 26-11 in the fourth quarter. "The ceiling fell in," moaned Bucks coach Larry Krystkowiak. "I'm speechless," said Michael Redd, who nonetheless continued talking. "I'm more speechless about us losing three in a row, not that we lost to the Knicks. The Knicks are a talented team. We knew they would come back and fight hard. When you have a lead like that, you've got to be able to defend and put your foot down and take advantage of the situation, and we didn't do that tonight." That's further proof, if you even needed it, that "speechless" athletes don't really understand how to use that word. Anyway, the Bucks bounced back from that loss to lose even worse the next night, losing by 25 at home to the Pistons. "We're kind of in the middle of a downturn, no doubt," said Krystkowiak. Uh, you think?

Fun fact: Four games ago, the Bucks (7-8) were leading the Central Division. Now they're fourth, and they're only that high because they share the division with the Bulls (4-10).

Miami Heat: It's like this team has just rolled over and died or something. They dropped to 4-12 after going 0-for-the-weekend. On Friday night, they were down by as many as 28 points against the Celtics and used a 34-12 fourth quarter surge (after Boston totally fell asleep) to make the final score look respectable. Then, on Sunday, the Nuggets put them into a 20-point hole in the first quarter and the Heat never really challenged after that. Even worse for the Heat, Shaq and Wade were almost invisible in those two losses. There's a funerary feeling about this team right now.

Fun fact: I've always said that, even in decline, Shaq is better than, say, a Zach Randolph because he's a better passer. Well, Shaq has 17 assists and 44 turnovers on the season. Randolph has 18 and 46. Of course, Shaq's shooting 60 percent from the field and Randoph is shooting 43 percent. Wait, what?? Randolph -- an inside player -- is shooting 43 percent? Ooooh, that's bad. Okay, Shaq's still the better choice.

Indiana Pacers: They just concluded a successful 3-1 Western Conference road trip and pushed their record back to .500 in the process, so you might be wondering why they're on this list. Well, two of their wins came against the Blazers (5-12, four straight losses) and Clippers (6-9, five straight losses), so they don't really count. They lost to Seattle (3-15), which was the worst team they faced on the trip. And their next three games are against Phoenix (13-4), Orlando (15-4), and Cleveland (only 9-9, but Lebron should be back by then). So I don't think they'll be .500 for long.

Fun fact: The Pacers had won four of five games without Jermaine O'Neal -- including wins over the Hornets, Mavericks, and Nuggets -- and then lost his "return game" to a 2-win team. Coincidence? No way.

Los Angeles Clippers: Hm, 0-for-the-weekend and five losses in a row by an average of 13 PPG. Yep: They are who we thought they were.

Fun fact: The Clippers next seven opponents -- Milwaukee, Seattle, Sacramento, Miami, New Jersey, and Charlotte -- are all currently below .500. Yet the Clippers will still lose most of those games. Depressing, isn't it?

Houston Rockets: Uh, what's going on here? The Rockets are loaded with talent. Tracy McGrady and Yao Ming are playing well. But they're only 9-9 after losing seven of their last 10 games, including Saturday's embarrassing loss to the Kings (6-10). I mean, how do you lose to a crapy team when T-Mac springs for 40 and Yao gives you 29 and 11? Somebody needs to remind Rick Adelman that his teams don't start sucking until the playoffs.

Chicago Bulls: Ah, sweet relief...Chicago has finally won two games in a row. And on Saturday night, they finally looked like the Bulls again. Ben Gordon scored 34 points (13-21) and hit five three-pointers. Luol Deng scored 29 points (13-21). Kirk Hinrich shot 50 percent (3-6) and dished 7 assists. Ben Wallace grabbed 19 rebounds to go with 5 steals and 4 blocks. It just begs the question: Where were you guys? Did aliens finally return the real Bulls and take their lifeless duplicates back into the mystery of space? I guess we'll find out soon, since the Bulls have games against Dallas, Detroit, and Boston this week.

Boston Celtics: The Celtics are an NBA-best 14-2, and they won both of their games this weekend...but they didn't necessarily look good doing it. They coughed up most of a 28-point lead against the Heat on Friday and slogged their way to an 80-70 victory over the Lebron-less Cavs yesterday. I guess sometimes winning is ugly.

Fun fact: Ray Allen is second all-time in three-pointers made with 1959. Reggie Miller is first with 2560.

Portland Trailblazers: Forget the fact that they've lost four in a row and nine of their last 10 games. Last night, Tim Duncan, Manu Ginobili, Bruce Bowen, and Michael Finley combined to shoot 8-32, and Duncan only played 10 minutes because of a bruised knee and sprained ankle, and the Blazers still lost by 21. How demoralizing is that?

Fun fact: Robert Horry played his first game of the season yesterday. He was 0-1 for zero points to go along with two rebounds and zero assists.

Seattle Supersonics: They had their winning streak snapped at one game and their home record fell to 1-8 after yesterday's 109-96 loss to the suddenly unstoppable Golden State Warriors. Kevin Durant, fresh off a season-high 35 points against the Pacers, missed his first six shots, went scoreless in the first half and finished with 6 points (2-12). He even blew a dunk in the fourth quarter. That's what we call an ego-ectomy.

Fun fact: The NBA is now tracking something that's called The Lenovo +/- Stat. It looks at the point differential when players are both in and out of the game, to see how the team performs with various combinations. Ray Allen currently leads the league with a score of +198. Kevin Durant, on the other hand, is the worst in the league at -187...worse than Stephon Marbury and Eddy Curry combined. Yikes.

Anonymous said...
Peja's back is probably giving him trouble.

Anonymous said...
anybody notice that the lakers' best 5 man combination in the lenovo +/- stat is the 5 of radmanovic, evans, walton, bynum and farmar? i know that evans isn't there anymore, but its very eerie that the supposed 2 best players on that team (kobe and odom) are not a part of that 5.
12/03/2007 11:08 PM

Basketbawful said...
wormboy -- Good point. I will dis the NBA for that one very soon.

laveron -- Unfortunately, I didn't catch that game. The teams had roughly equal fouls and FTAs...so nothing really stood out to me.

tayshaun -- Randolph is a turnover machine; I mean, he and Eddy Curry are the exact same player, except that Randolph rebounds now and then.

Anonymous said...
Can someone explain the +/- thing? A lot of writers mention it now, and I'm not clear what it indicates.

Joe said...
One thing I found really confusing is that the top performers in the Lenovo +/- are all on strong teams. Celtics, Spurs, Suns, Magic, etc. It seems to be more logically consistent that teams who rely on one or two strong players will reward those players with higher ratings and teams that are well rounded will do well despite the lack of their best players. However, the Spurs are apparently THAT much better with Ginobili in, and LeBron isn't on the list. Unless it only accounts for totals and not averages, in which case the stat would seem flawed.
12/06/2007 5:57 AM
Post a Comment
<< Home
Subscribe
RSS Feed
Mailing List