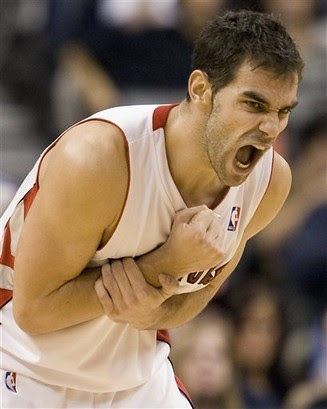 "Yeeeeaaaaaarrrrrrgggghh!!"
Kyle Korver: The hero of the 76ers' big road win against the Bucks became the goat in the team's homecourt flameout against the Jazz. After scoring 20 points (8-13) on Tuesday night, Korver scored only 4 points (1-9) against the Jazz. He was also limited to 21 minutes thanks to his 5 personal fouls. Of course, the real villain of the game was the 76ers' defense, which allowed the Jazz to shoot 55 percent from the field. Said coach Maurice Cheeks: "We talked before the game about eliminating layups and they (Jazz) had 20-plus layups. That's something I'm trying to stop." Better luck next time, coach Cheeks.

Fun fact: Carlos Boozer, who scored 26 points (12-17), is shooting 71 percent (44-62) over his last four games. He's currently fourth in the league in scoring (25.4), seventh in field goal percentage (57.7), and ninth in rebounding (11.2). With all due respect to Dirk Nowitzki and Tim Duncan, I think Boozer may be the best power forward in the Western Conference right now. Of course, we all know that Duncan will be the best PF come playoff time.

Memphis Grizzlies: The game was pretty much decided in the second quarter, during which the scary bears were outscored 30-10. I know the Raptors are a top-ten defensive team this season, but a 10-point quarter? You'd think a professional basketball team could score 10 points by accident.

Fun fact: Did you know that Brian Cardinal is making almost $6 million this season? Or that he'll be making over $6 million next season, and almost $7 million the season after that? His season totals -- not averages, but totals -- are: 17 points (on six field goals), 15 rebounds, 6 assists, 1 steal, zero blocks, and one hilarious picture of him getting knocked on his ass by Jeff Green. Also, check out Cardinal's arms. Those look like my grandpa's arms.

Milwuakee Bucks: Hey, Bobby Simmons was back! Unfortunately, his 5 points (1-4) couldn't prevent a 96-80 spanking from the Hawks (6-8). After this loss, construction of the Bucks Bandwagon has been halted until further notice. The Bucks committed 19 turnovers, clanked away from three-point range (3-17), and Charlie Bell -- the guy they wouldn't let bolt for Miami last summer -- contributed zero points (0-4), 3 rebounds, zero assists, zero steals, zero blocks, and 1 personal foul. I can see why they wanted to keep him.

Fun fact: Andrew Bogut is a talker, and he had a few choice things to say about his team after they lost to Atlanta. Basically, he thinks the Bucks suck against bad teams. "Without giving anyone bulletin board material or calling guys out or anything, it's just a problem that we're having with the franchise since I've been here." And hey, you can't say that Bogut didn't do his part: 18 points (7-12), 11 rebounds, 4 blocked shots.

Lebron James' supporting cast: James sprained his left index finger in the second quarter and didn't return to the game. What ensued was a ruthless thrashing of the Cavaliers by an undermanned Pistons team. The Cavs scored only 31 points in the second half, and even if they'd doubled that number, they still would have lost by four points. Yes, it was that bad.

Fun fact: According to basketball-reference.com, Donyell Marshall has earned almost $60 million in salary over his career. So why does it look like he bought his clothes off the clearance rack at Sears?

Matt Bonner: He notched a one trillion during the Spurs' relatively merciful drubbing of the Wizards. Yet he was still shown up by Dominic McGuire, who managed the even more rare two trillion. Even in a battle of futility, Bonner comes out the loser.

Fun fact(s): Matt Bonner might be a lousy NBA player, but he still leads a rich and complex life. To whit: Bonner received only one B in his scholastic career after failing a chemistry exam in late 2002. Among Bonner's favorite food is a Mr. Sub smoked turkey breast submarine sandwich with mayo and mustard on whole wheat. Bonner bought his car, a white Pontiac Grand Prix, in New Hampshire to avoid paying sales tax. He chose it because it had good leg room and decent gas mileage. [From Wikipedia]

The Dallas defense: Okay, maybe the Mavs' problem isn't ball movement after all. They strugged mightily to "limit" the lowly Timberwolves (2-11) to 103 points -- almost 10 points above their season average -- on 50 percent shooting. Here's the sad thing: The Mavs had to shake up their rotation, moving Jason Terry and Erick Dampier back to the starting lineup, just to barely end a three-game losing streak against the worst team in the league. Yikes. As a sidenote, the Mavs shot 1-10 from three-point range.

Fun fact: Turns out that Al Jefferson kid is just as good as projected: 20.7 PPG (on 52 percent shooting), 11.2 RPG, and 10 double-doubles in 13 games. This guy is Kevin McHale's one last flickering chance at redemption as a GM. But don't worry: I'm sure he'll screw this up too.

Starang: A few days ago, loyal reader and Suns fan Starang left the following comment on our blog: "Do you hear that clicking noise? Yeah, that one...it's the Suns' chemistry...we are about to rattle off 19 in a row...of the next 13 games, we play Spurs and Mav's 12th and 13th with no one in between, except maybe Utah, but that still should be a win." Congratulations, Starang: You successfully stat cursed the Suns, who have now lost two in a row since your bold and foolhardy prediction. I sincerely hope you've learned your lesson.

Jermaine O'Neal: The Pacers are now 6-1 without you this season. Jamaal Tinsley and Mike Dunleavy Jr. both play like All-Stars when you're not around. Do you get it? Without you clogging the lanes and fattening your stat line on a steady diet of contested 15 to 20-foot jumpers, the other Pacers can actually drive to the hoop and move the ball around for open shots. It's amazing. I wish you could be a part of it, but I know your titanic ego -- which insists you're almost as good as Kevin Garnett -- won't allow you to adjust your game to help the team. Look, we'll welcome you back with open arms, but only if you show up prepared to rebound, play defense, and settle into your new role as the third or fourth option on offense. Oh, and when you do get the ball, we'll expect you to take it strong to the hoop. No more fading away from the basket. Be a man. Signed -- Larry Bird.

Fun fact: Hey, we had a Raef LaFrentz sighting last night...only the fifth one of this young season. He's now amassed 16 points, 6 rebounds, and 1 assist for the season. Can you believe this dude is still on the books for $11 million this year and $12 million the next? Also: Portland has lost seven of its last eight games.

Seattle Supersonics: They held the Magic to 43 percent shooting and still lost by 16 points at home? How is that possible? Oh, they shot 35 percent themselves, thanks primarily to Kevin Durant and Wally Szczerbiak, who combined to hit only 12 of 41 shots. P.S. I think I'm falling into man love with Dwight Howard. If he gets any better, his game will cure cancer by 2014.

Unknown said...
Fun fact: According to basketball-reference.com, Donyell Marshall has made almost $60 in salary over his career. So why does it look like he bought his clothes off the clearance rack at Sears?

Anonymous said...
Damnit Starang, I think he should be left off any other blogs until the Suns do win 19 in a row. Ummm...Nah. He's a good blogger and the only reason I come to basketbawful.com, ohhh, and you too all mighty basketbawful man.
11/29/2007 1:47 PM

Anonymous said...
Cardinal and Lafrentz sure fucked over a couple of teams with their fat, underserving contracts. Remember when Cardinal wore kneepads at Perdue? What a fag!!!!
11/29/2007 6:44 PM

Anonymous said...
for some reason i watched some of the sonics/magic game. everytime durrant touched the ball he jacked it up. a couple of dribbles and the he shot the ball. it was also funny watching wally stand behind the three pt line, waiting for a pass everytime down the floor. celtics reallly screwed them this summer....Go Boston!!!!!!!!!!!!!!!
11/29/2007 6:48 PM

Anonymous said...
I'm gonna assume that should have said "Be a man."

Although I do like the idea that Larry Bird signs off every letter by saying: "Me a man."

Anonymous said...
The best PF is Carlos Boozer? Like, the actual Carlos Boozer from the Jazz? Oh my God. Look, I know you've got stats and all that to back up your argument, but nobody in the world is better at anything than Tim Duncan. And I'm not just talking about basketball. I dug up these past champions for you.

See, that's 7/8 for Tim Duncan. You've been crushed by the grip of reason. Now you tell me who the best power forward is?

Basketbawful said...
Liston -- According to the official Web site of the Pillow Fight League, Tim Duncan has never been Pillow Fighting Champion. However, if you're interested, Boozy Suzy will be defending the title against Lynn Somnia on December 18th at the Gladstone Ballroom in Toronto, Canada.

Anonymous said...
I said My Bad...thats about all I can do for my poor decision making on that one. I was excited, what can I say.