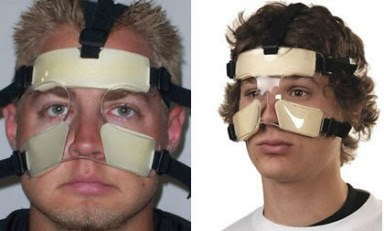 Broken nose? No problem. Unless looking like the
Phantom of the Retarded Opera is a "problem."
What it is: A vaguely face-shaped sheet of plastic, a few strips of vinyl foam padding, and a couple elastic straps.

What it's supposed to do: Support and protect a broken nose so that the wearer can continue to engage in nose-cracking activities.

What it actually does: Oh, it protects the nose all right, but it also makes you look like Hannibal Lecter's mildly retarded younger brother. Either that or an escaped mental patient from some dark, post-apocalyptic future where the only rule...is that there are no rules.

Who it's for: Anybody who's had their nose shattered but isn't willing to take four to six weeks off from basketball so it can heal properly.

What it says about you: Playing basketball is more important to you than the shame and embarrassment associated with wearing a Dork Vader mask to protect your minor facial injuries.

Celebrity endorsement: After suffering three major nose demolitions during the 2003-04 season, Rip Hamilton began wearing his protective mask full time in the 2004 NBA Playoffs. And he continues to wear the mask to this very day, reportedly because three reconstructive surgeries have left him decidedly Michael Jacksonesque: That is, without nose cartilage and vulnerable to a career-ending injury. He also claims the mask brings him good luck. Anyway, here's an amusing video about Rip and his unstoppable Mask of Doom.

Personal anecdote: During my sophomore year in college, I was getting a booty call engaged in a mutually fulfilling session of physical and emotional intimacy when my girlfriend accidentally knocked a 50-pound stereo speaker onto my face. You read that correctly: She dropped a 50-pound stereo speaker on my face. I might have been able to catch it, but she was going through that adorable "neurotically insecure with her body" phase that all college girls seem to go through, and she had demanded I keep my eyes closed during The Sex. And since I was simultaneously going through that "I'd do anything for the booty" stage that most college guys go through, I happily capitulated. So I was just lying there -- probably with a big, goofy smile on my face -- when the world exploded into a dazzling array of multi-colored wonder. I opened my eyes and saw three things: Stars, a geyser of my own blood, and my shrieking girlfriend. Since she was too distraught to do anything but scream and run around the room in circles, I was forced to staunch the blood flow with a pair of my own jeans and call a friend for help. He showed up with this little first aid kit and said, "I read somewhere that 80 percent of head wounds look worse than they really are." I showed him mine, and then he said, "Yeah, let's go to the hospital."

It was a big party weekend at my school, so it took 20 minutes to convince the nurses that having a 50-pound piece of stero equipment dropped on my face had nothing whatsoever to do with binge drinking. When they finally let me into the emergency room, the doctor sagely informed me that the rogue speaker had "obliterated" my nose. It was a compound fracture, which in medical terms means "the broken ends of bone have pierced the skin." Yeah, it was ugly. I was then introduced to the transcendent joys of local anesthetic and emergency reconstructive surgery.

I left the hospital with two black eyes, 28 stitches, and a freaky mask to wear in case, as the doctor put it, I was "stupid enough to want to play sports before the nose heals." Which of course is exactly what I did. Me and some buddies went to the co-recreational gym a few nights later, "just to shoot around," and ended up in a five-on-five game against four brutish dudes and a girl. Since I was injured, my friends agreed that I should guard the girl, because all things being equal she should have been the least physical of the five. Two plays into the game, however, she whacked me hard across the face while going for the ball. Fortunately I had my mask on, right? Wrong. I was too embarrassed to wear it. The next day, I had to go back to the nose doctor and explain why my nose was now sitting sideways on my face. He responded by ramming a couple wooden sticks up my nose holes and cracking the bone back into place. Good times.

My point? If you break your nose and choose to play hoops, just wear the damn mask.

Cost and availability: Amazon.com has a limited variety of decent nose guards. The Bangerz Nose Guard is $29.95, and the Mueller Nose Guard is $39.00. There's also a generic nose guard for $39.90.

Pete Fresh said...
Since Rip chooses to wear the mask rather than kill himself, corny white kids feel they have an excuse to rock the face mask without shame. Get it straight suburban basketball nerds: it's cool when Rip does it, lame when you do it. If you break your nose accept the fact that you must now either give up any dreams of becoming the next David Lee and take a break from dunking on your Nerf hoop, or be willing to sacrifice your nose like a real man.
8/07/2007 1:18 PM

I've always worn glasses, so back when I played in Junior High and before, I couldn't play with my glasses on. I SO wanted to do the Kurt Rambis thing, but my Dad was afraid of my glasses breaking...so I had to wear the goggles. The Horace Grant freakishly huge ones. I felt like such a dork.

I always end up just playing with the glasses on anyway. Of course, such behavior often ends with me getting hit across the face and my glasses smashing on the floor. Meanwhile, a gash has opened on my face from the impact and we're all just standing around awkwardly until it's decided that I should probably sit the rest of the game out.

Basketbawful said...
dennis -- Sadly, Rip's was custom made, and probably costs more than it would take to sell me on eBay.

pete -- I agree except for the "it's cool when Rip does it" part. He still looks kinda goony.

Anonymous said...
Loren: It's like talking to my Dad all over again. :P That's almost exactly what he said to me each time I asked why I was forced to wear the Horace Grant goggles.

Basketbawful said...
josh and loren -- I wore glasses until my late teens. It's amazing, really, because nobody gets hit in the face as often as the guy with glasses. I don't know if you guys read or watch Harry Potter stuff, but basketballs are like bludgers to the spectacled.

In my hometown, the high school graduation ceremonies were followed up by an event called "The Final Fling." It was basically a huge non-alcoholic party on the school grounds. One of the features of this event was that they opened up the basketball court. Since I never made the varsity team, I couldn't wait to do this. I had just taken my first shot and was retrieving my ball when the only other guy shooting around launched an airball and blasted my glasses apart. It also opened up a huge gash across my forehead. So I was blind and bleeding for the remainder of the party. Good times...
8/07/2007 4:03 PM

Anonymous said...
Did Rippy really call him Dark Vader? Raja Bell is gonna have to whip out his Jedi mind tricks on him. Let The Force be with the Suns.
8/07/2007 8:03 PM