The Mavericks have been the best team in the league since about mid-November, and the primary reason for that is their improved defense. The Mavs are fourth in the league in points allowed (93.4), eighth in field goal percentage allowed (45.0), and second in point differential (7.7). Yet in yesterday's 126-104 drubbing, Dallas allowed the Phoenix Suns to shoot a video game-like 65 percent from the field -- an NBA season high. The Suns' "Big Three" of Steve Nash (7-for-11), Amare Stoudemire (10-for-13), and Shawn Marion (8-for-10) combined to shoot almost 74 percent from the floor (for what it's worth, they were also 100 percent from the line).

Of course, as always we need to keep this game in perspective. The Suns' have the most potent offense in the NBA, but they aren't going to shoot 60+ percent over the course of a seven game series against an excellent defensive team. And the Mavs' defense is much, much better than what we saw yesterday. The fact is, the game meant more to the Suns, who are trying to hold off San Antonio in the battle for second place in the Western Conference (and home court advantage for a likely semifinal series against the Spurs). The Mavs, on the other hand, have essentially wrapped up the best record in the league and homecourt advantage throughout the playoffs. That's not to say they didn't try, but they most certainly didn't play with the intensity and sense of urgency that they would have had in a more critical game. 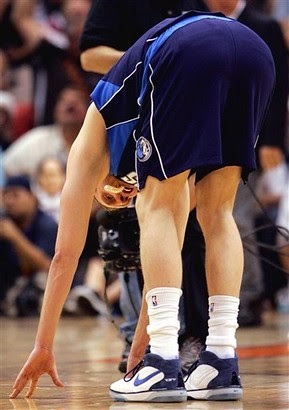 Dirk and the Mavs bent over and
took it from the Suns yesterday.
Runner up: Over the last couple weeks, the Spurs have been hot on the heels of the Suns for the second-best record in the West. But their quest to overtake Phoenix might have taken a critical blow yesterday, and not just because the Suns beat the Mavs. The Spurs, who hold opponents to a league-best 89.5 points per game, lost 100-99 to the Jermaine O'Neal-less Pacers. This would probably be a good time to point out that the Pacers are 32-41 and have lost 16 of their last 19 games (including 11 straight losses). Probably a game the Spurs should have won.

Second runner up: The Bulls had an excellent opportunity to take over second place in the Eastern Conference on Saturday, but lost a 112-108 overtime decision to the Cleveland Cavaliers. The loss came while playing at home and after establishing slim leads in both the fourth quarter and overtime. What makes the loss even more painful is that, thanks the the NBA's new playoff seeding formula, the Bulls are now ranked fifth instead of second, despite having the third best record in the conference. When you lose a must-win game at home, that doesn't bode well for making an extended playoff run.

Anonymous said...
In the Bulls defense, there were some very bad calls and non callsall through out the game in Cleveland's favor, especially that out of bounds call. The Bulls rarely seem to get any home cooking under Skiles. Then again, Gordon pretty much blew it in OT. That's ok, they took it to the Pistons tonight, in Detroit, without Ben Wallace. Season series Bulls.
4/05/2007 1:57 AM
Post a Comment
<< Home
Subscribe
RSS Feed
Mailing List