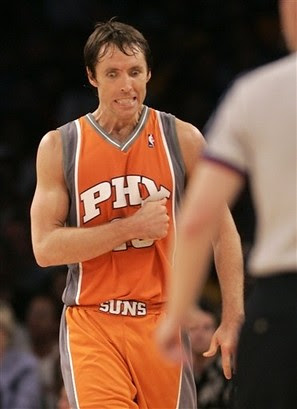 That's the face of a killer.
Or the Incredible Hulk.

Last night, the soon-to-be named MVP Dirk Nowitzki and his 67-win Dallas Mavericks choked up a 3-1 first round series lead to the not-even-supposed-to-be-here-today Golden State Warriors. This was quite a contrast to what had happened just a few hours earlier, when Steve Nash once again proved why he's the reigning MVP.

The Lakers won Game 3 of their series against the Suns for a variety of reasons, the primary one of which was that they used a series of aggressive traps and double-teams to keep the ball out of Nash's hands. But instead of blaming the refs, a lack of effort (by his teammates), a dearth of talent (in his teammates), or his teammates' inability to hit shots, Nash took the onus on himself...promising to keep the ball, split those traps, and make things happen for his team.

What "happened" was 17 points and a career-high 23 assists in a 113-100 smackdown of the Lakers. Those 23 assists, by the way, were one shy of tying the all-time playoff record co-held by Magic Johnson and John Stockton, the two greatest point guards of all time. They also came in a contest in which Nash outdueled the supposed "best player" in the league, Kobe Bryant.


What I love about what Nash is doing is his swagger and killer instinct. While his buddy Dirk was putting on the ten-fingered necklace he loves to wear in big games, Nash continued to attack the opposing team and his critics. And those who like to point at his talented cast of teammates should review Games 3 and 4 and watch what happened when Nash came out of the game. His value to his team, and in the league, should be unquestioned.

Like Bob Cousy and Magic Johnson before him, Nash is proving (or re-proving) that you can dominate the game of basketball without scoring 50 points. It's as beautiful and fun to watch as anything you'll ever see. Kobe fans like to make the claim that Bryant's efforts go unappreciated because of his sketchy past. But Nash's efforts often go unappreciated by the casual fan because he's short, white, unathletic, and probably will never go for 50 (although he'll probably dish for it). The fact is, this guy's the best player in the league right now five minutes ago (see below).

It's official: Baron Davis is the best player in the NBA. Although I really wish this movement had started after the Warriors completed their upset of the Mavericks, because if Dallas comes back all of this talk will be forgotten in less time than it'll take Baron to get injured next season.

Al James said...
Don't take the Bill Walton stance on Nash's ability. Every time I watch a Pheonix game that Walton is commentating, he always brings up Nash's "lack" of athleticism. Just because he can't throw the ball off the back board and do a 720 degree spin while catching the ball and putting it between the legs, twice, doesn't mean he's not one of the more athletic players in the league. Its not all white boy hustle.
4/30/2007 10:34 AM

Basketbawful said...
You're right, Al. What I meant is that Nash isn't a great athlete in the "classic" sense...i.e., he does not have blazing, break-away speed and the ability to leap four feet in the air.

But in terms of conditioning, body control, hand-eye coordination, and a million other factors that make someone a great athlete but don't make clips on SportsCenter, Nash is as athletic as they come.

Anonymous said...
How about Magic gushing about "The Return of Showtime (Steve Nash Edition)"? I'm ready to root for a Warriors-Suns WCF, and let the guards touched by Don Nelson's Magic Pixie Dust (tm) duel it out! Where's my paper bag, I'm hyperventilating...
4/30/2007 2:13 PM

Hersey said...
Nash is the best leader in the NBA. He's had the edge all season and we got a big taste yesterday in that performance. I'm so sick of people praising Kobe for balling with little help and poo-pooing Nash because he plays with All Stars- while forgetting that he best teams often have 2-3 All Stars. Those teams are great because those talented players still play a role and someone has to lead. Nash is the man.
4/30/2007 7:39 PM

Anonymous said...
nash is hands down mvp... or hands up. obviously the leauge did not want to give him three in a row because he is a skinny white boy, or a canadian apparently he does not deserve the mvp.
4/30/2007 10:03 PM

Anonymous said...
Amare, Marion, Raja, Barbosa, Jones....yeah Nash is really carrying that team. The guy makes passes to guys that shoot extremely well. And well over half of those assists were dishes to guys who made jumpers or passes to amare who's ....maybe 15x better than Kwame.

Anonymous said...
A list of the two greatest point guards of all time that doesn't include Oscar Robertson or Bob Cousy?
5/01/2007 6:50 AM

Basketbawful said...
I know what you're saying mike, but here's why I left those two off the "two best" list:

First, I don't consider Oscar a true point guard. He played more like a shooting guard that controlled the ball most of the time. Indeed, if you watch old game footage, he did not exclusively bring the ball up the court, which in my mind is the duty of a point guard. Of course, back then, they simply didn't have that designation. You were a guard period. But if Oscar played today, he'd be a 2-guard.

2. The Cooz revolutionized the position. One might even say he defined it. But my one beef with Cousy was his horrific shooting. He never shot as high as 40 percent in a single season. He was in the 30s for his entire career. I know it was a different era, and shooting percentages were lower back then, but 30 wasn't great even for the 50s and 60s. That's why I'd put him behind a Stockton, who was a career 51 percent shooter. Stockton could do anything Cousy did, played tough-as-nails defense, and was more efficient for a longer period of time.
5/01/2007 8:42 AM

Anonymous said...
well even though steve does have those players on his team, kobe does have accurate shooters that he doesnt pass to, for instance lamar is a 47% shooter, cook is a 45% shooter, farmar as a rookie is a 42% shooter and oh look at this ronny turiaf 55% luke walton 47% and on and on, dont go and say that oh these people cant shoot from seeing their averages in the playoffs, its the suns dont forget obviosly they are not going to be as accurate.
since these people are not bad shooters why does kobe barley get any assists... the awnser is that he DOES NOT PASS. also the people on the suns roster, like raja bell amare marion rose barbosa etc are not averaging much higher fg % so this must simply be a fact of kobe not passing to his players. and from dirks current preformances there is no way he should be mvp, nash is like i said earlier hands down... or up mvp of the nba
5/01/2007 5:27 PM

scoots said...
Granting that Nash has stepped up, and Dirk has stepped back, in this postseason, I’m still going to question whether Nash’s playoff performance should have anything to do with whether he should have won the mvp this year.

Would you say that mvp should be for the person you most want going into the postseason? Because it seems to me it should reward the person who actually did the most for his team in the regular season. (Ideally you'd have both, but if they're not the same person then you have to pick one.) I assume you think Nash did that during the season anyway--and you've got a plausible case--but I'm more pushing on the playoff question. Since you never know how someone is going to perform in the playoffs (and last year Dirk was the hero until Wade turned into superman), should your expectation of their playoff performance affect the mvp?

In any event, I think it's clear that if Dallas loses this series (unless they lose in game 7, and Dirk goes for 50/18 in each of the last three), that Dirk will never win another mvp unless/until he has a championship.

But I still say he was this year's regular-season mvp, as embarrassing as it is for him to go down the way he appears to be doing right now. He’s embarrassing the award (although his defense and rebounding have been quite good), but I still think he deserves it.
5/01/2007 6:38 PM
Post a Comment
<< Home
Subscribe
RSS Feed
Mailing List

Word of the Day
Previous Posts
The Chicago Bulls' difference maker? Basketbawful.
Houston Rockets rewrite history. The bad way.
The Pacers: "We suck. Don't leave us."
It's official: James Posey sucks.
Word of the Day: Game 1-itis
An apology to coach Mike D'Antoni
Bulls/Heat: Game 1 Recap
The Bulls have no chance against the Heat (and her...
The Top 5 First Round Playoff Flops
Backboard:1 Kid:0