flu-like symptoms (floo'-lik simp'-tuhms) noun. A generic description used to cover up for the fact that a player is too hungover to play.

Usage example: Alonzo Mourning missed a game last month with flu-like symptons, which will happen from time to time when you live in Miami.

Word Trivia: Back in 1995, I travelled to Indianapolis to attend an Indiana Pacers game. The game was on Saturday night, so I went out to the bars with some friends on Friday night. And who do we run into but the Pacers' very own Derrick Mckey! Derrick was in the company of no fewer than three stunning ladies (who, considering the fact that we were in the heart of Indiana, must have been imported from out of state or maybe even overseas), and he was getting completely and utterly shit-faced. By the end of the night, the girls had to carry him out. "I wonder how he's going to play tomorrow?" I asked a friend. Turns out he didn't. He was held out of the game with "flu-like symptoms."

Speaking of the Pacers and flu-like symptoms, did anyone notice how the lowly Golden State Warriors thumped the Pacers 113-98 in Indianapolis last night? This was somewhat unexpected, particularly because the Pacers had been playing much better than the Warriors since the two teams exchanged baggage a few weeks ago. Yet the Pacers shot 35 percent, got out-rebounded by 15, and allowed former-Pacer and current-asshat Stephen Jackson to score a season-high 36 points. And did I mention that Jamaal Tinsley took 24 shots? Gack. Keep in mind, though, that this dreadful performance came the day after the Indianapolis Colts won the Super Bowl in Miami. I have a pretty strong feeling that some -- if not all -- of the Pacers were suffering from flu-like symptoms yesterday. 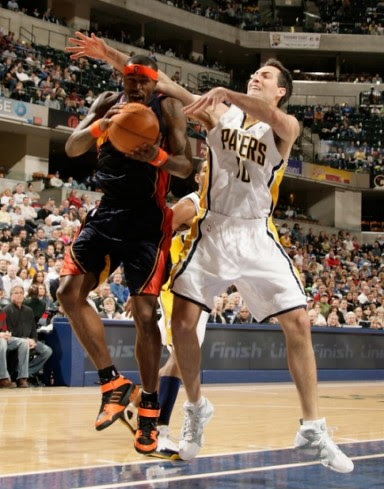 Word of the Day
Previous Posts
The 3-Headed Monster
Vince Carter can dunk. Or, at least, he used to.
Friday's thoughts on Thursday's games
Daily eBay: Kobe's sweat(band)
Quotables: Starring Moses Malone and Larry Bird
Cross-dressing 101: Joe Namath edition
Yep. That elbow was intentional.
Kobe: Suspended
Basketbawful Hall of Fame: Alan and Jerome
Word(s) of the Day: "And whoever else you wanna name"